The Office — New video updating us with the latest on Jim and Pam!

Zamzar —  Free file conversions.  Convert any Youtube video into an MP3and much more!!

Whale Site — The Whale and Dolphin Conservation Society has posted a life size picture of a Blue Whale! It’s so big that a map of the photograph is included to make it easier for you to know what you are seeing. It takes forever to load but then you can say you’ve viewed a life-size whale on your monitor.

NCAA Basketball — (Naughty Language Warning)  This is why Duke Sucks!

Portable Clusters — This is a new product we’ve been working on at Nor-tech in partnership with our largest customer, Reason Computers.  It’s a mobile supercomputer that’s rugged enough to be transported anywhere!!  Think oil exploration or advanced analysis in places like Iraq.

Whale Attack — This one is pretty crazy!  A whale attacks a fishing boat and turns the fisherman into bait.

The Miracle Kid — A friend of mine runs a proxy site which allows people to get around corporate firewalls and internet blocking software.  He’s getting a tremendous of traffic in Iran where people are trying to avoid government censorship.  He found many, many people searching for information on this kid.  It’s all very bizarre to me!

Global Incident Map — It’s a very scary world according to this website!

The Oval Office — A parody of my favorite TV Show.

If you are sitting next to someone who irritates you on a plane or train:

1. Quietly and calmly open up your laptop case.

4. Make sure the guy who won’t leave you alone can see the screen.

6. Close your eyes and tilt your head up to the sky.

CRN — I was also quoted in CRN this week discussing our new Voyageur Green PC series of energy efficient computers.

Complaint Free World — Will Bowen’s Mission to help people quit complaining reached a new level this week when he and his purple Complaint Free bracelets were featured on NBC’s Today Show!

States Quiz  — How many of the 50 states can you remember in 10 minutes?

Beer Goggles — I know I’ve bought these before!

Virtual Keyboard — Get ready to jam out!!

Jedi Trash — (Naughty Language Warning) — Krazy Kory sent me this last week and was very disappointed when I didn’t include it on my update.  I guess I just didn’t find it as funny as he did.

Chinese Food Song — I eat Chinese food pretty regularly.  I did the day I saw this video and honestly couldn’t get it out of my head during my meal.  I left a lot on my plate that day.

Free Hugs — If more people did this, the world would be a happier place.

Cermax — I guess I started something last week!  My co-worker, Jay, also has an online business.  It’ selling Cermax which is supposedly the most advanced engine additive available.  If you’re interested in the product and decide to buy it, please use Account # 90005 so Jay gets credit for the sale.  Thanks!

Britney Bald — Plenty of pictures and video of Britney going nuts and shaving her head!

Blake Lewis — This guy is my favorite so far in the new group of American Idol contestants.  I just love the beat boxing!!

Playa Cofi — This is an awesome web jukebox that plays 20-30 great songs from any year you want!

Dramatic Smiles — My buddy Mike Wittchow is a budding internet entrepreneur and he asked me to plug a couple of his websites.

DramaticSmiles.com sells tooth whitening kits for the best prices on the internet.

Savemybreakup.com is an ebook for couples who have recently fell onto hard times.

Practiceforex.com gives some introductory information for people interested in the world of currency trading.  Hope this helps you out, Mike!!

Apple Ad Parodies — And you just knew the parodies were going to be right around the corner!!

Forrest Gump Horror Movie — Evil is as Evil Does

Twilight Zone — A link to every single episode is here!!

Smack this guy — Good way to get out some aggression!

Toothpick Art — I love art I can pick my teeth with!

Scary American Pie — I always knew Stifler was a psycho!

Google Maps — Natural terrain in Canada looks like a woman’s face from space!

Star Wars — What really happened after the Death Star Blew Up

Violent Tigger — A tutorial on how to make a quick buck from your friends at The Disney Corporation!

Faith — This dog would fit in well at my house.

Biggest Bears Fan — I’m all for supporting one’s favorite team, but this guy is crazy!!

Fun Things To Do With Bees – I’m thinking the animal protection people will probably want to have a talk with these guys. 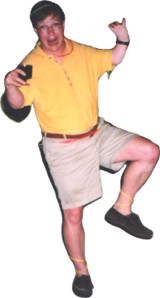 I will put a new site on this page each week.  This will be a site that either made me laugh my butt off, twisted my mind, or inspired me in some way.  If I can’t find a site like this each week, the link will probably lead to a bunch of naked chicks!!