The Wedding of Tara and Danny 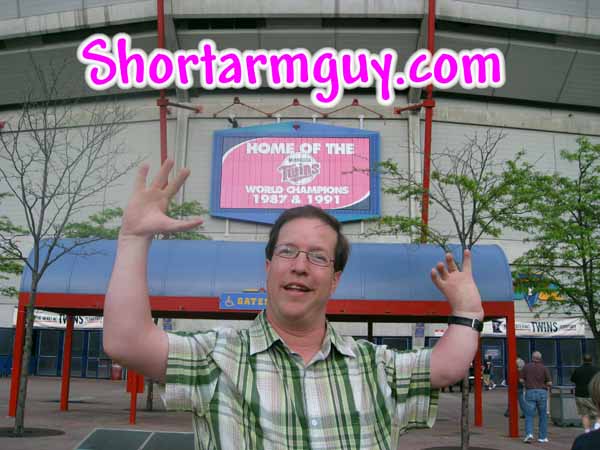 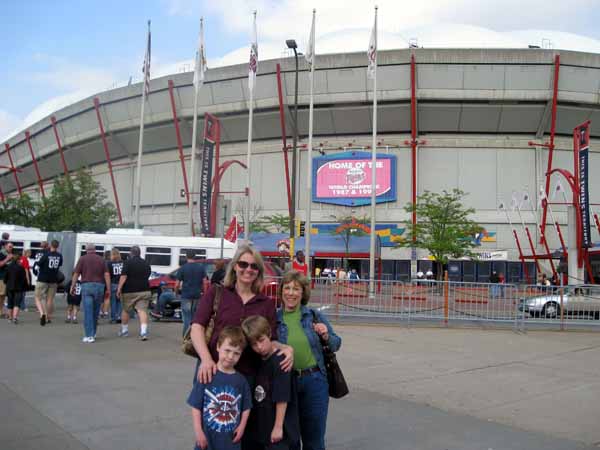 On Wednesday night, the Shortarmguy Family headed down to the Metrodome to go see a Minnesota Twins game.  As is obvious from this picture, the boys are extremely excited to be going. 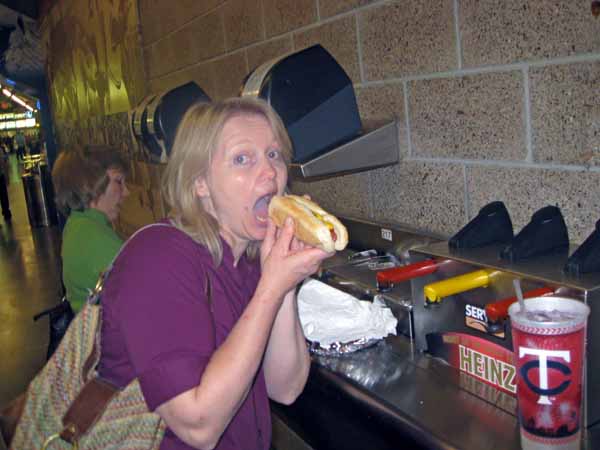 Miss Sheri is a huge fan of the famous Dome Dogs!  Especially on Wednesday nights when they only cost $1 dollar!!  We nearly missed the start of the game because she insisted on making multiple trips between the concession stand and the condiment counter.  My wife just loves condiments.

The reason we went to the game was because it was Medical Technology night and the boys were invited to go on the field before the game.  They joined a bunch of other Heart Kids to watch a little girl who received a pacemaker at only 10 weeks old throw out the game’s first pitch.  After they returned to their seats, I asked them if they had fun.  Avery shrugged and Luke exclaimed “It looks a lot more exciting than it really is.”  I guess they answered that question. 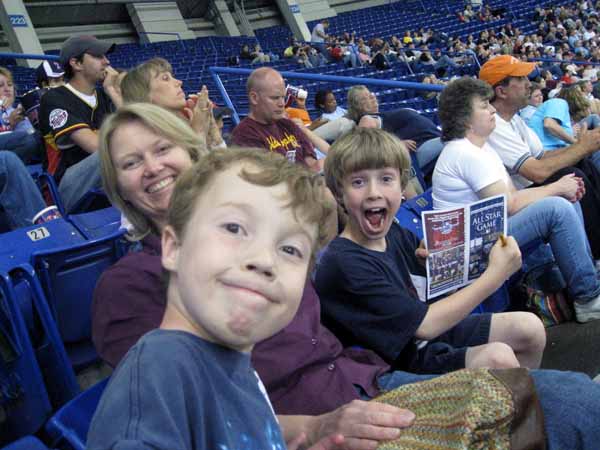 As much as we tried to get into the game, sadly we’re just not that big of baseball fans.  After the second inning, I looked at everyone and said “Who’s ready to go home?”  Shortly later, we left.  Shortly after that, the Twins rallied back from behind to win the game in exciting fashion.  But the Shortarmguy Family was back at home getting ready for bed. 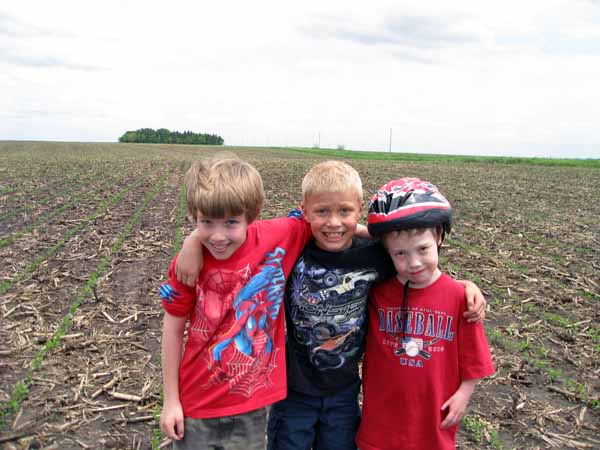 On Saturday, we made the trek down to Iowa to visit the farm and cousin Joey.  Although they rode their bikes and scooters for only a short while, Luke insisted on keeping his helmet on as they did other activities like running in the corn fields.  Deep inside I was secretly proud of the wisdom my son was showing.  One never knows when a freak hail storm will suddenly appear and begin pelting these boy’s tender skulls with ice balls. 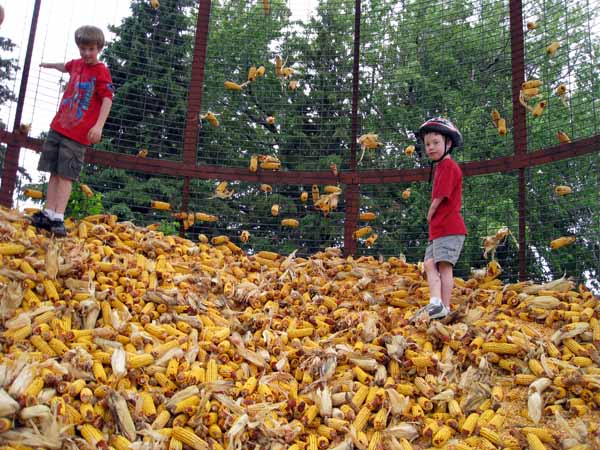 Since the price of corn is currently so high, the boys insisted on climbing in one of the bins to swim around in the stuff.  They cackled like greedy old men as they tossed kernels in the air and screamed “I’m rich!”  They were saddened when we made them empty their shoes and pockets before exiting.  They felt like their socks were full of Gold! 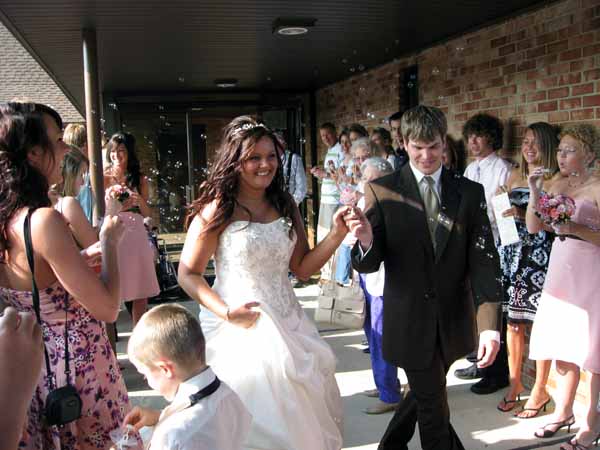 The reason for our trip to Iowa was to attend the wedding of Miss Sheri’s cousin, Tara Timmerman, and her new husband, Danny Faber.  It was a beautiful wedding and everyone had the opportunity to drench the couple in bubbles after it was all done.  That’s always fun! 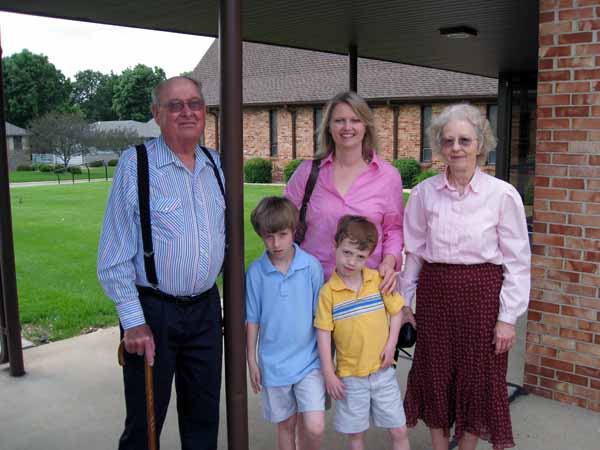 Everyone appeared to be extremely excited to go to the wedding.  So much excitement in fact, I almost thought we were going to a Twins Game! 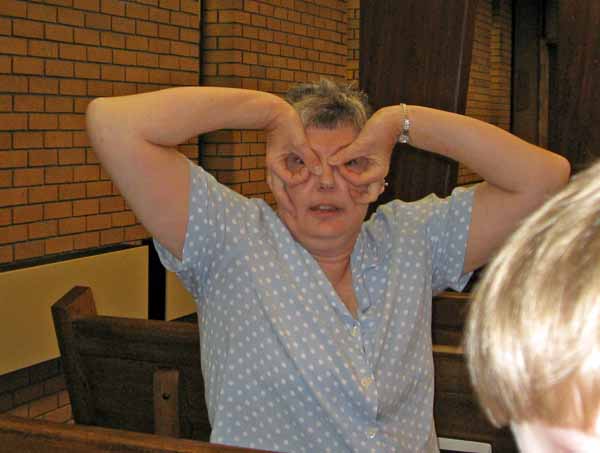 For some reason, cousin Deb watched the entire wedding this way.  We couldn’t exactly figure out why. 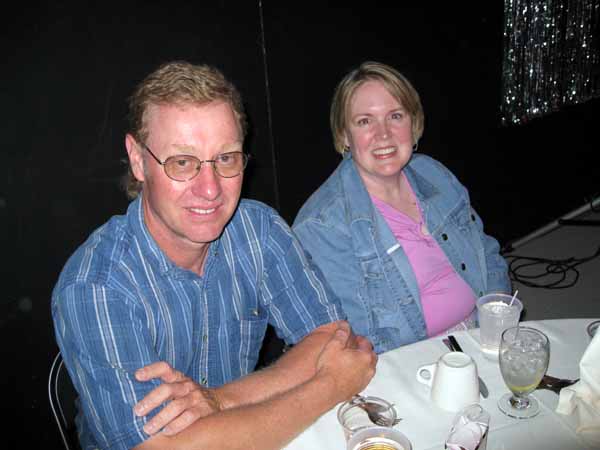 At the reception, we shared a table with Miss Sheri’s brother, Jerry, and his wife, Laura.  Out of honor to the grand institution of marriage, we sat and watched as our kids beat the crap out of each other on the dance floor. 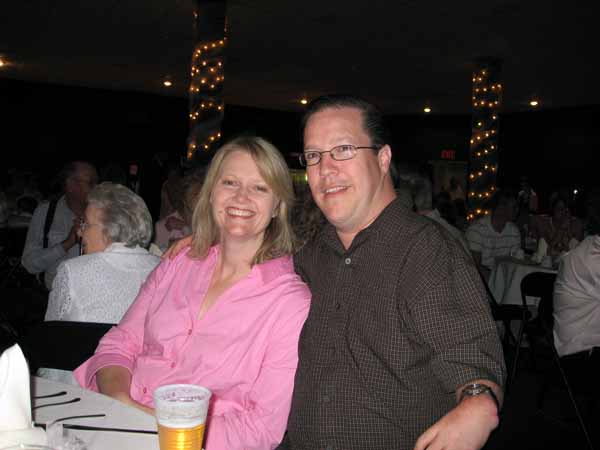 Miss Sheri and I always enjoy reviewing the state of our marriage as we attend the new bonds of matrimony of a young couple in love.  We spend a lot of time in thought reflecting on our own fourteen plus years of wedded bliss.  Then I celebrate all of our happiness by consuming as much beer as I possibly can in a short period of time.  I’m certain my wife likes it this way.

This Dog Sure Hates Balloons!

How to Avoid a Parking Ticket!

The Dangers of Ice Skating 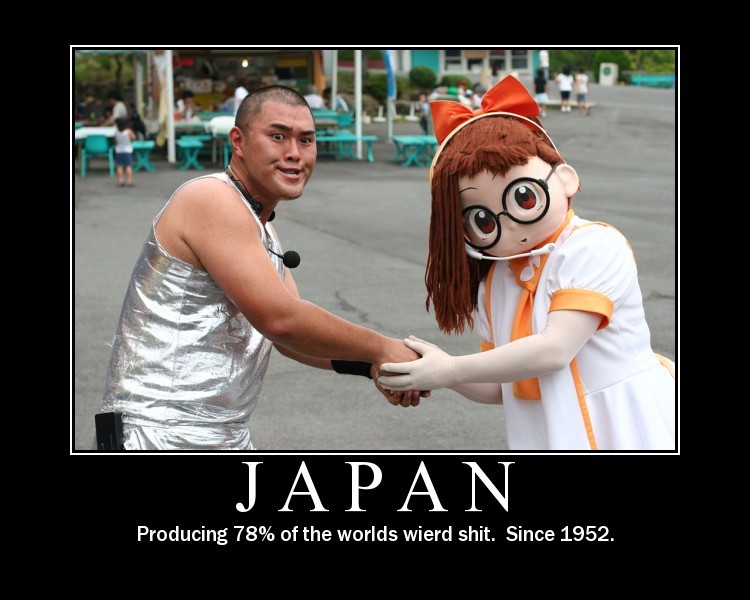 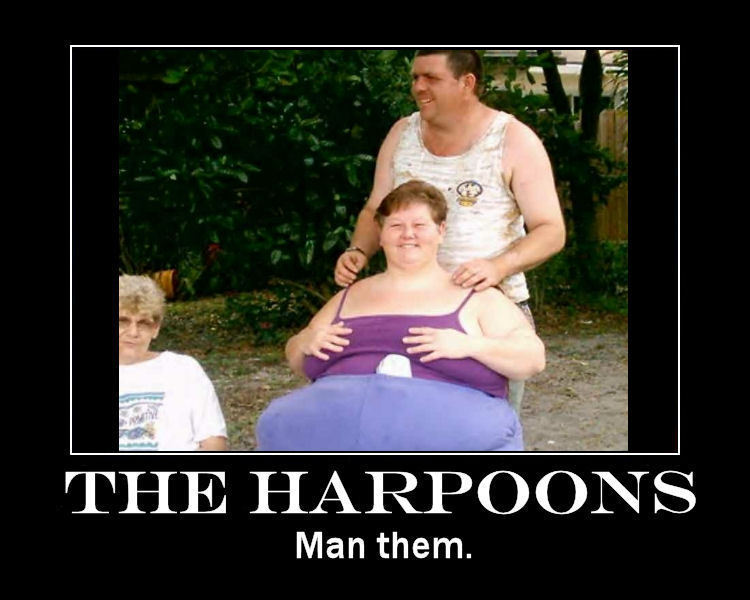 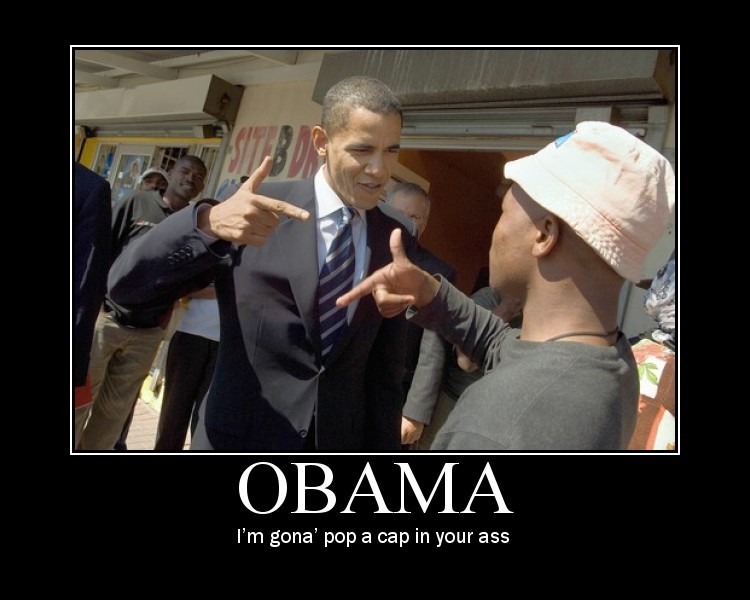 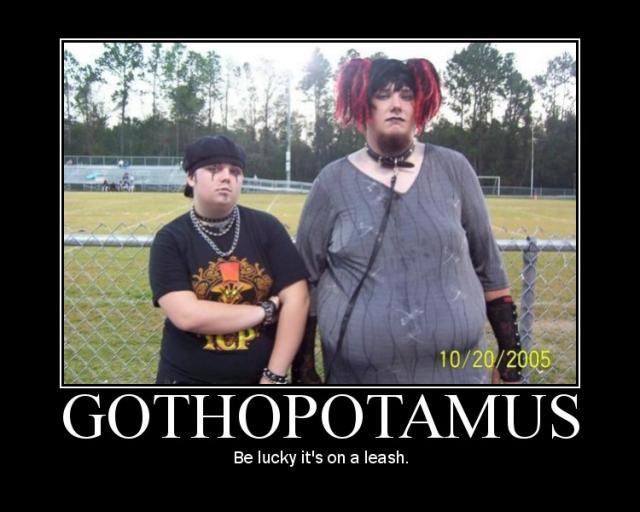 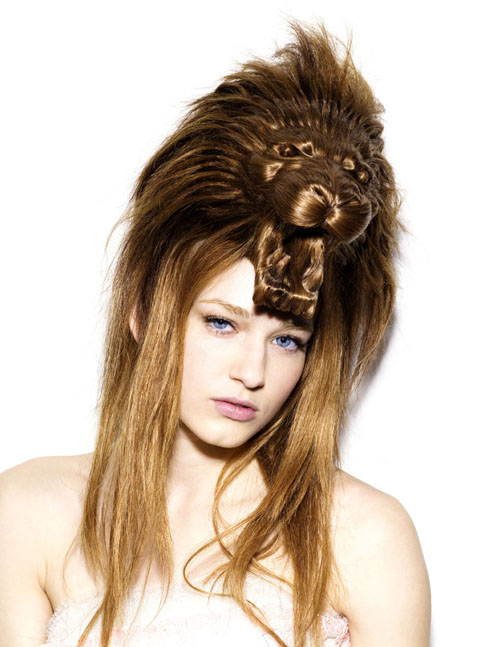 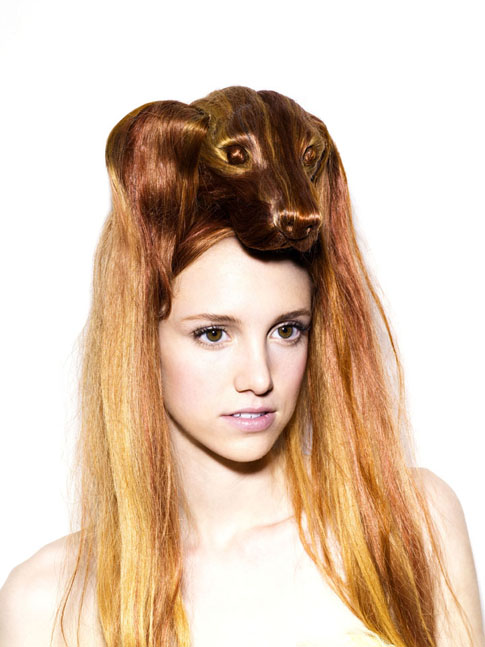 Probably not a good idea… 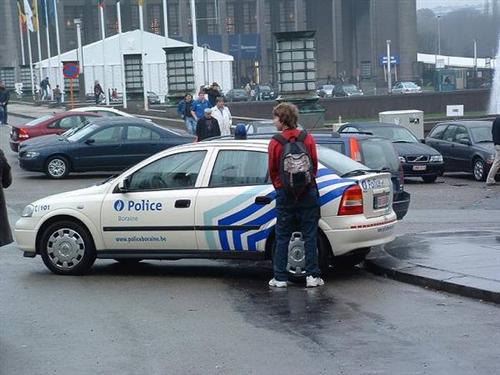 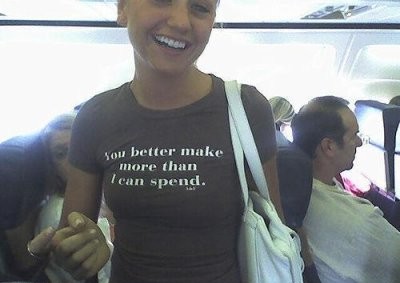 This isn’t going to end well… 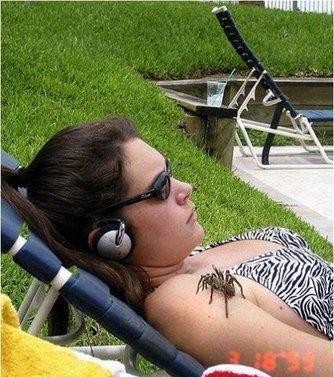 When you look at this picture in a closer look you see its Albert Einstein . 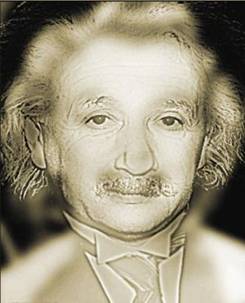 But if you stand (10-12 feet) distance. It will become Marilyn Monroe .

“A good plan is like a road map: It shows the final destination and usually the best way to get there.”

A 5th grader asked her mother the age-old question,
‘How did I get here?’

Her mother told her,

‘Did God send you, too?’ asked the child

‘What about Grandma and Grandpa?’ the child persisted.

‘He sent them also,’ the mother said.

‘Did he send their parents, too?’ asked the child.

‘Yes, Dear, He did,’ said the mother patiently.

‘So what you’re telling me is that there has been NO sex in this family for over 200 years?  No wonder everyone’s so damn grouchy around here!’

Dear shortarmguy, what’s up? I’ve been visiting your web-site for about two years now and am finally getting ambitious enough to write. I, also, have a disability (see pictures attached) but have never let it slow me down. Much. I grew up with loving adoptive parents who never told me not to participate in sports for fear of getting hurt. I started out playing softball (Cub Scouts!!) then on to Little League baseball for a couple of years. I gave up baseball after that because I wasn’t fast enough to dodge a fastball! lol
I moved into football later because that’s what kids do in Missouri (where I grew up), I also wrestled and played basketball, a little. Although there’s not much call for short, slow white guys that can’t jump. I also played tennis, golf, table tennis, power-lifting and any other sport I could try. I still play golf (poorly) for fun, and table tennis in tournaments. 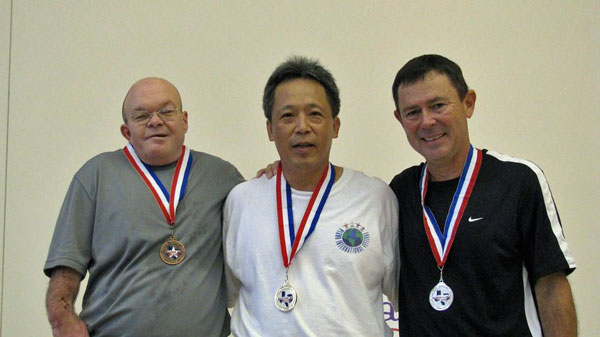 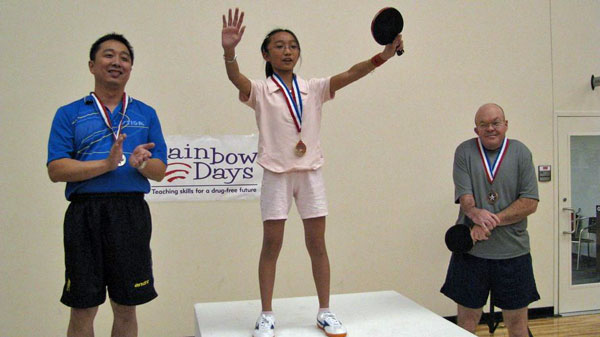 That’s me in the gray t-shirt. I also grew up with the “looks” from other kids (still do) but have learned to deal with it. At 51 years of age, it’s about time!
I (like you) have a good sense of humor about my disabilty and about life in general (after all, no ome gets out of it alive!) and also have a very lovely and supportive wife and a large (my mom was one of 12), close-knit family. I thouroughly enjoy your web-site and want you to keep up the great work! Hope to hear back from you soon and Happy Father’s Day!

Sincerely, Steve Still (not the singer)

you know man. . . . you’re totally inspirational. I saw you on miami ink. good luck in getting famous!

hey shortarmguy since you always have stuff on about your kids i thought you would like this i walked into my bedroom and my son was sitting on the bed just having fun with stickers so funny and cute. love the site have been a faithful viewer for about 3 years
steve evans
buffalo, new york

Sex and The City Movie — Miss Sheri and I were big fans of the HBO series and went to see the movie on Tuesday night.  We were pretty pleased with the movie in general, but Carrie is as self-centered as ever!  “Big showed up to the wedding 5 minutes late….I’m so humiliated!  I’ll never speak to him again!!!”  Miranda did have a very hot love making scene, though, which forces me to give the movie a really Big Thumb Up!

3D Tour of Disney World — This is worth downloading Google Earth To Do!  Pretty Amazing!

Hottest Video of the Week!

I Kissed A Girl-Kate Perry

Shortarmguy Quotes in the Press

Todd Swank, vice president of marketing at Nor-Tech, a Burnsville, Minn.-based system builder, sees the paper as Microsoft’s attempt to avoid painting Windows 7 as a panacea for the pain some customers and partners have experienced in migrating to Vista.

“Microsoft is basically saying, if you don’t address your issues today, and think you can just transition from XP to Windows 7, you’re going to be facing the same problems,” said Swank. “Microsoft isn’t going to make Windows 7 more compatible with XP than Vista.”

The Washington Post’s Mensa Invitational once again asked readers to take any word from the dictionary, alter it by adding, subtracting, or changing one letter, and supply a new definition.

Here are this year’s winners. Read them carefully. Each is an artificial word with only one letter altered to form a real word. Some are terrifically innovative:

1. Intaxication: Euphoria at getting a tax refund, which
lasts until you realize it was your money to start with.

2. Reintarnation: Coming back to life as a hillbilly.

3. Bozone (n.): The substance surrounding stupid people
that stops bright ideas from penetrating. The bozone layer, unfortunately, shows little sign of breaking down in the near future.

4. Cashtration (n.): The act of buying a house, which
renders the subject financially impotent for an indefinite period.

6. Sarchasm: The gulf between the author of sarcastic
wit and the person who doesn’t get it.

7. Inoculatte : To take coffee intravenously when you are
running late.

9. Osteopornosis: A degenerate disease. (This one got extra credit.)

10. Karmageddon: It’s like, when everybody is sending
off all these really bad vibes, right? And then, like, the Earth explodes and it’s, like, a serious bummer.

11. Decafalon (n.): The grueling event of getting through
the day consuming only things that are good for you.

13. Dopeler effect: The tendency of stupid ideas to seem
smarter when they come at you rapidly.

15. Beelzebug (n.): Satan in the form of a mosquito, that
gets into your bedroom at three in the morning and cannot be cast out.

16. Caterpallor (n.): The color you turn after finding half
a worm in the fruit you’re eating.

17. Ignoranus: A person who’s both stupid and an asshole.