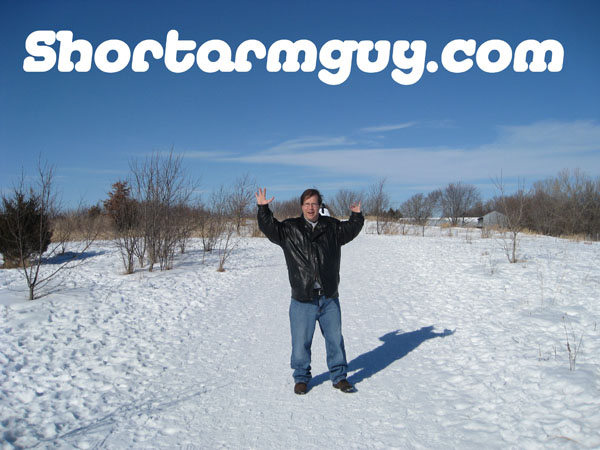 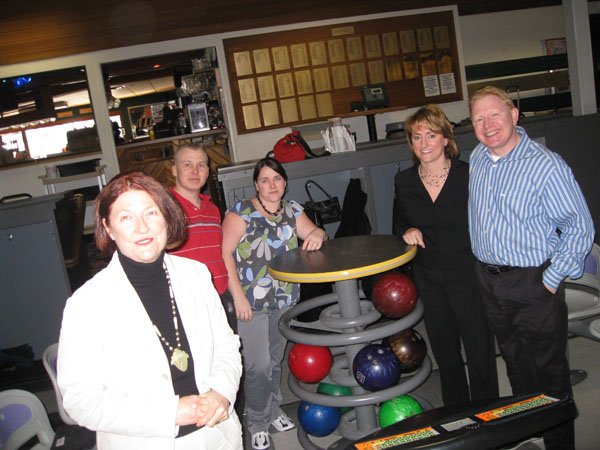 On Thursday, Nor-Tech had a special activity lined up for all employees who wanted to participate.  A bunch of us went bowling over our lunch hour! Yayyyy! 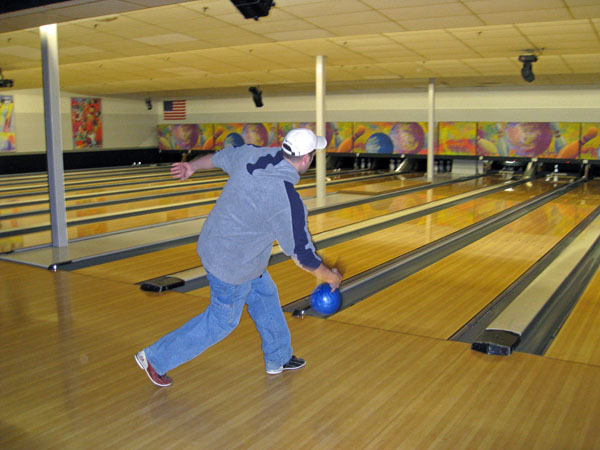 I was lucky enough to play with my co-workers, Jay Erickson and Chad Redmann.  On the drive over to the bowling alley, I asked Chad what it was like to play tight end for the Minnesota Gophers and he told me a bunch of cool stories.  I also learned that Chad was a state championship wrestler in high school and went undefeated his senior year.  He even once practiced against the Toughest Guy in the World, Brock Lesnar!  I liked Chad’s stories so much, I asked him if it would be OK if I sat in his lap for awhile at the bowling alley so he could tell me some more.  He just politely told me No. 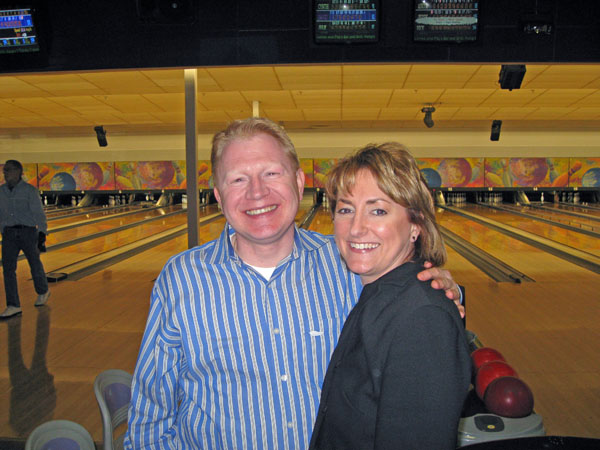 Dr. Bollig and his wife, Cynthia, were kind enough to host this spontaneous bowling event for their employees.  I asked them if it would be OK if we also honored one of the great old bowling traditions and got hammered on pitchers of beer while we played.  Being that we had to be back to work in an hour, they just politely told me No. 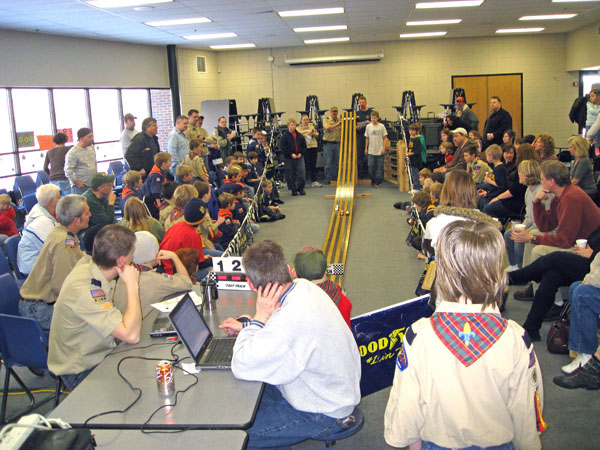 We participated in one of our favorite activities on Saturday: 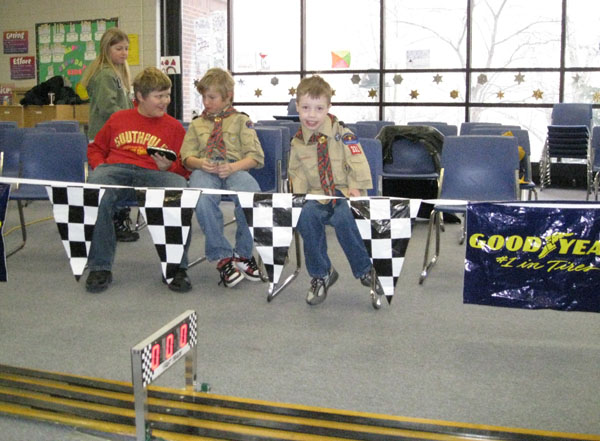 Luke and I were kind of a lonely crew this year.  Avery woke up this morning saying he didn’t feel good.  So like the good parent I am, I told him to quit his belly-aching and get ready to go to Cub Scouts.  He put on his uniform and made it to the garage door.  Then he asked me “What if I get sick at the race?”  I said “You won’t!”  So he ran to bathroom and threw up.  Luke and I ended up as a couple for the rest of the day. 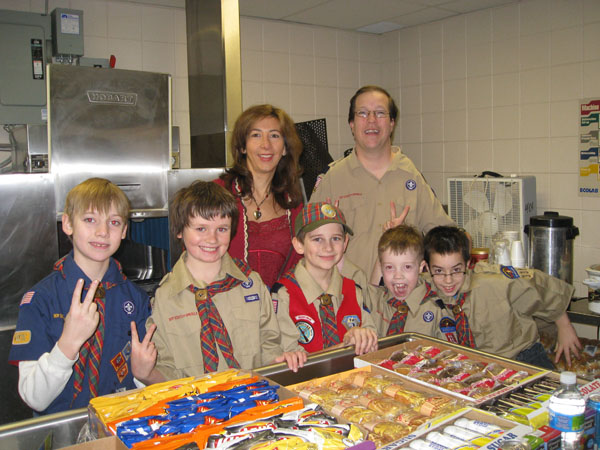 It was our Den’s turn to host the concessions stand.  It was a lot of fun selling snacks to the hungry crowd of people.  The chocolate doughnuts & hot dogs were very popular.  The Balance Nutrition Bars?  Not so much. 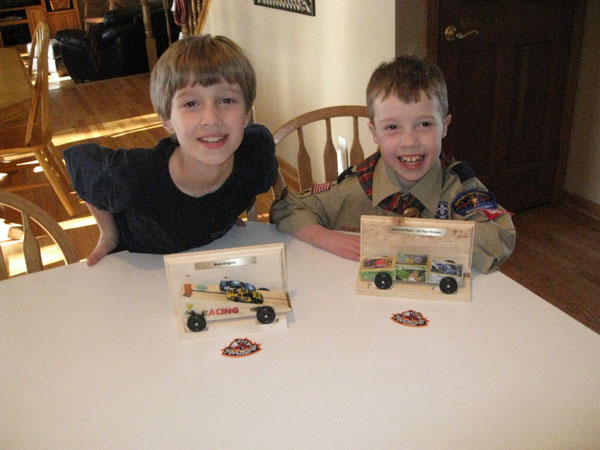 Avery was a good sport when we returned home.  Of course, he was bummed that he missed the big race, but he was quite happy to see the candy his brother had bought for him.  Because nothing goes better with the stomach flu than a big old bag of Skittles! 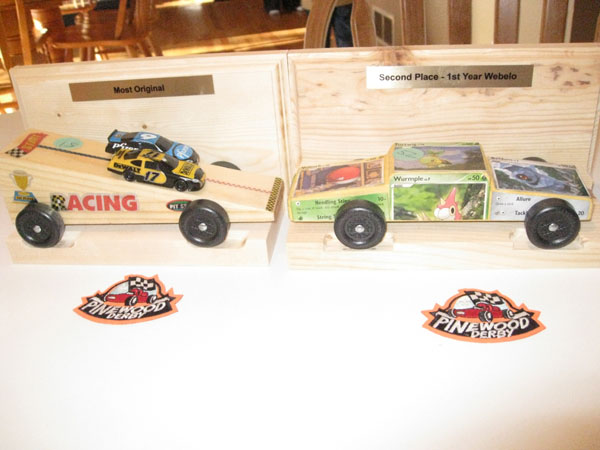 Avery’s car won an award for being the most original, while Luke’s Pokemon car won second place in his division.  I’d probably have been more excited for them had there been cash prizes involved, but the little plaques were also nice. 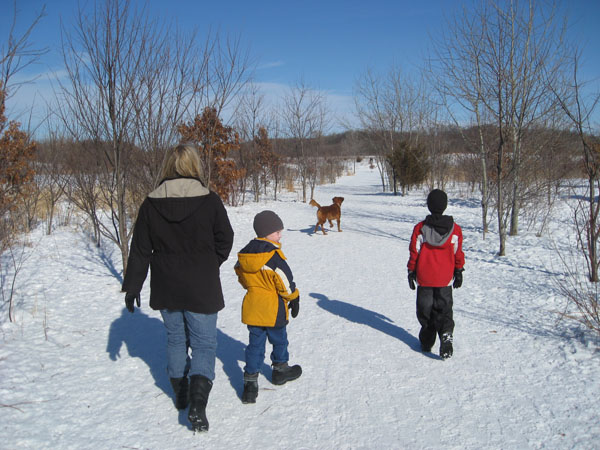 It felt like Spring was in the air, so we decided to take a trip to the dog park on Saturday afternoon.  It was a whopping 43 degrees outside and just a couple of weeks ago, it was 40 below zero!  We felt like we were in heaven!!  But I’ll bet you probably don’t see a bunch of dogs sniffing each other’s privates in heaven.

The new administration waves farewell to the old one… 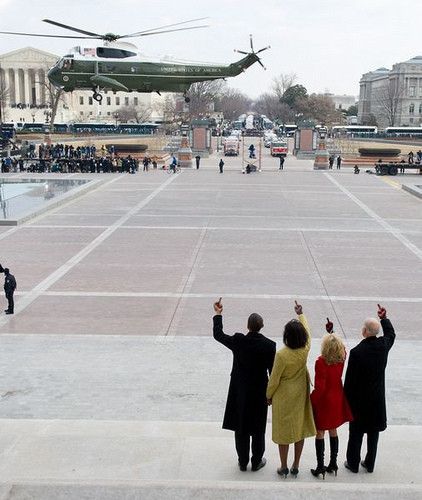 Why first class is better than coach class… 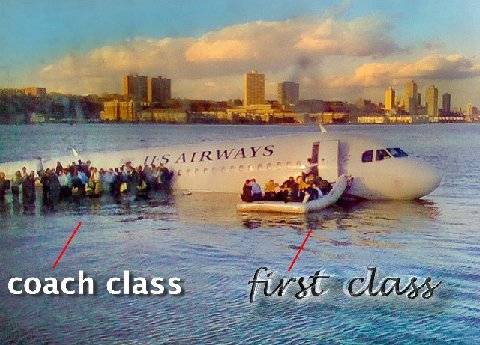 It’s fun to mess with the Governor! 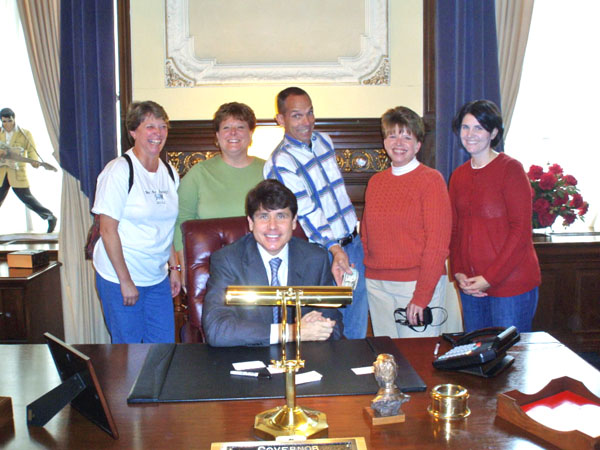 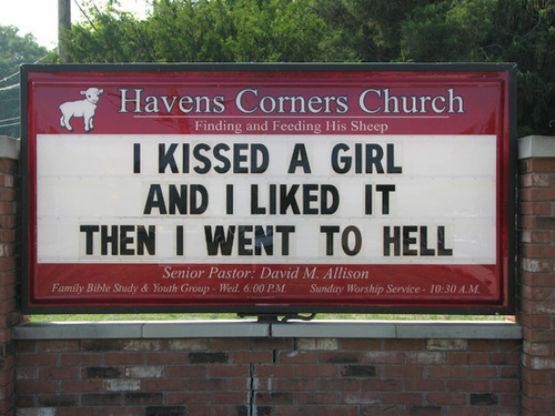 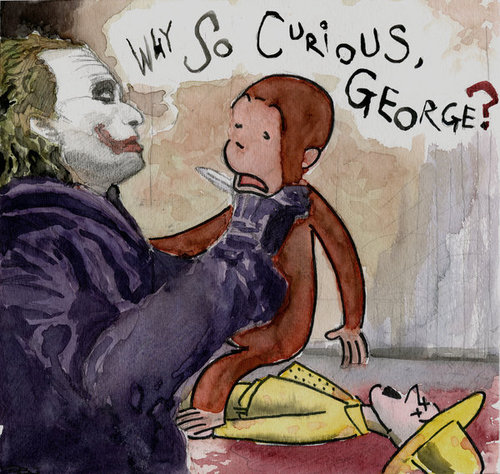 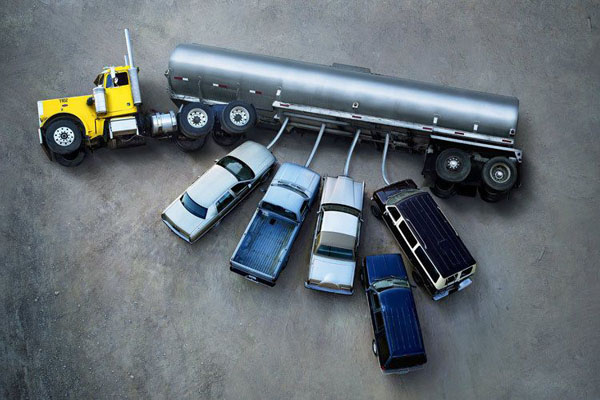 Most comfortable outfit ever! 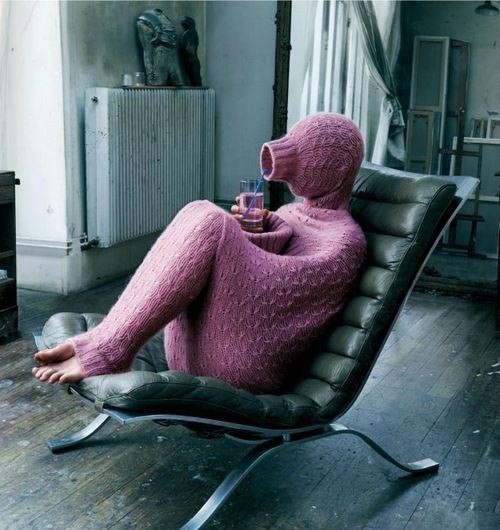 You don’t want to be pulled over by this guy… 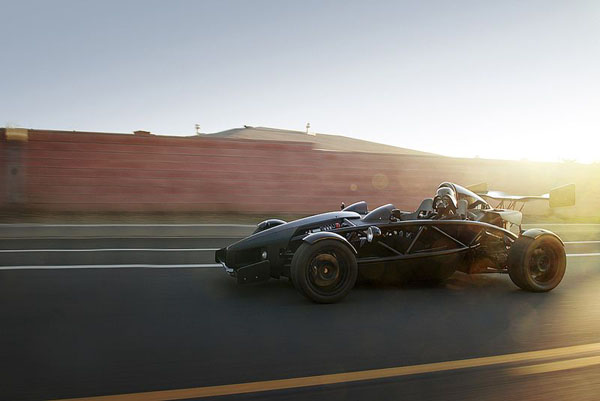 She would have been SOOO much hotter on the dark Side! 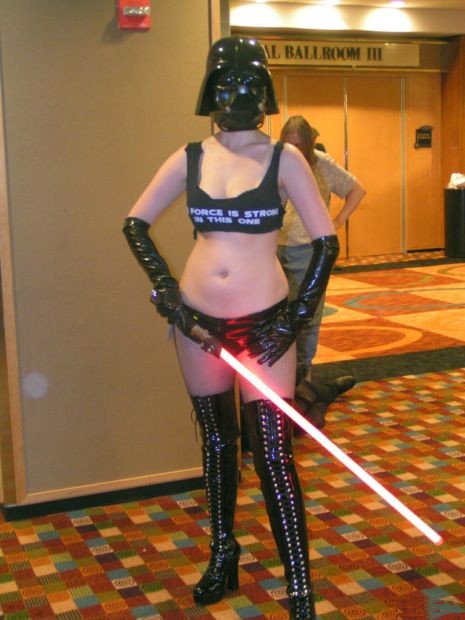 A government big enough to give you everything you want,

is strong enough to take everything you have.

An Amish boy and his father were in a mall.
They were amazed by almost everything
they saw, but especially by two shiny, silver
walls that could move apart and then slide
back together again.

The boy asked, “What is this Father?”

The father (never having seen an elevator)
responded, “Son, I have never seen anything
like this in my life, I don’t know what it is.”

They continued to watch until it reached the
last number and then the numbers began to
light in the reverse order.

Finally the walls opened up again and a
gorgeous 24-year-old blonde stepped out.

The father said quietly to his son…
“Quicky Son, Go get your mother.”

Crayon Physics — I just bought this game for the boys and they love it!  They don’t even realize they’re learning all about Physics!

Hero on the Hudson — Can you land the plane in the river?

A restaurant to die for!

A few weeks ago, I was shuffling toward the basement with a steaming cup of coffee in one hand and the morning paper in the other. I turned the dial up into the phone portion of the band on my ham radio in order to listen to a Saturday morning swap net. Along the way,

I came across an older sounding chap, with a tremendous signal and a golden voice. He was telling whoever he was talking with something about “a thousand marbles.”

I was intrigued and stopped to listen to what he had to say. “Well, Tom, it sure sounds like you’re busy with your job. I’m sure they pay you well but it’s a shame you have to be away from home and your family so much. Hard to
believe a young fellow should have to work sixty or seventy hours a week to make ends meet. Too bad you missed your daughter’s dance recital.” He continued, “Let me tell you something Tom, something that has helped me keep a good perspective on my own priorities.” And that’s when he began to explain his theory of a “thousand marbles.
” “You see, I sat down one day and did a little arithmetic. The average person lives about seventy-five years. I know, some live more and some live less, but on average, folks live about seventy-five years. Now then, I multiplied 75 times 52 and I came up with 3900 which is the number of Saturdays that the average person has in their entire lifetime.

Now stick with me Tom, I’m getting to the important part. It took me until I was fifty-five years old to think about all this in any detail,” he went on, “and by that time I had lived through over twenty-eight hundred Saturdays.
I got to thinking that if I lived to be seventy-five, I only had about a thousand of them left to enjoy.  So I went to a toy store and bought every single marble they had. I ended up having to visit three toy stores to roundup 1000 marbles. I took them home and put them inside of a large, clear plastic container right here in the shack next to my gear.

Every Saturday since then, I have taken one marble out and thrown it away. I found that by watching the marbles diminish, I focused more on the really important things in life. There is nothing like watching your time here on this earth run out to help get your priorities straight.

Now let me tell you one last thing before I sign-off with you and take my lovely wife out for breakfast. This morning, I took the very last marble out of the container. I figure if I make it until next Saturday then I have been given a little extra time. And the one thing we can all use is a little more time. It was nice to meet you

Tom, I hope you spend more time with your family, and I hope to meet you again here on the band. 75 year Old Man, this is K9NZQ, clear and going QRT, good morning!”

You could have heard a pin drop on the band when this fellow signed off. I guess he gave us all a lot to think about. I had planned to work on the antenna that morning, and then I was going to meet up with a few hams to work on the next club newsletter. Instead, I went upstairs and woke my wife up with a kiss.

“C’mon honey, I’m taking you and the kids to breakfast.” “What brought this on?” she asked with a smile. “Oh, nothing special, it’s just been a long time since we spent a Saturday together with the kids. Hey, can we stop at a toy store while we’re out? I need to buy some marbles.”
MAY ALL SATURDAYS BE SPECIAL!