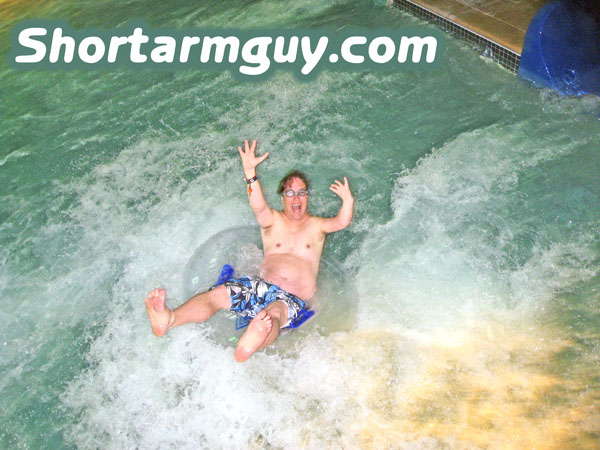 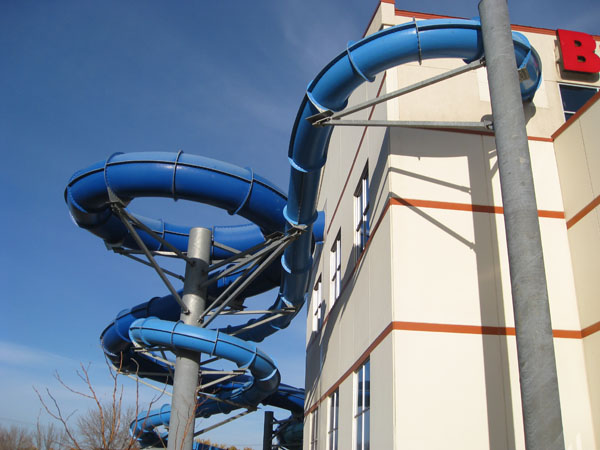 It was a quiet afternoon at the Shortarmguy household last Saturday, so we decided to head up to Brooklyn Park, Minnesota to see what was new and exciting at Grand Rios Water Park.  As it turns out, there wasn’t much new.  Pretty much the same old water as the last time we went here for a visit. 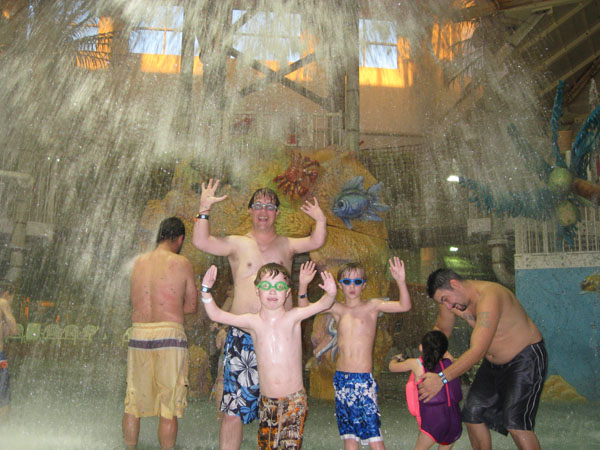 We enjoyed standing under the massive bucket of water that dumped on our heads every few minutes.  The gentleman standing at my left in this photo commented to me that he watched me get my tattoo from Kat Von Di.  I tried to explain to him that Kat Von Di was on LA Ink and I received my tattoo on Miami Ink, but it didn’t seem to register.  So I just thanked him and said that “Yes, Kat did a hell of a good job!” 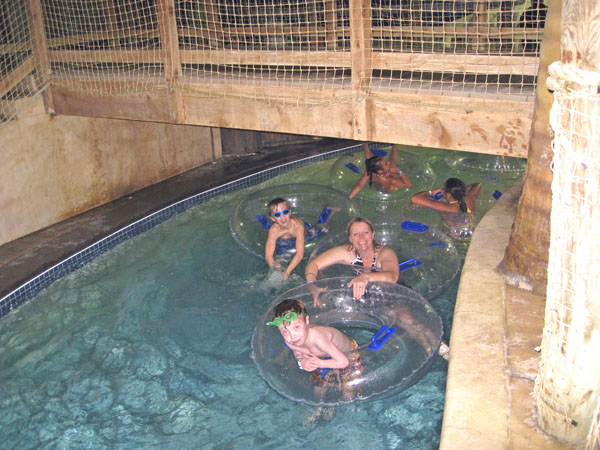 We had a lot of fun on the lazy river.  After awhile of being lazy, we decided we wanted to get some exercise and dump our tubes to swim against the current.  The lifeguards then told us our actions were illegal.  I tried to tell them that it wasn’t good for our society to try to force people to be “lazy” and rely solely on the efforts of the water, but sadly my pleas fell on deaf ears.  What a pity. 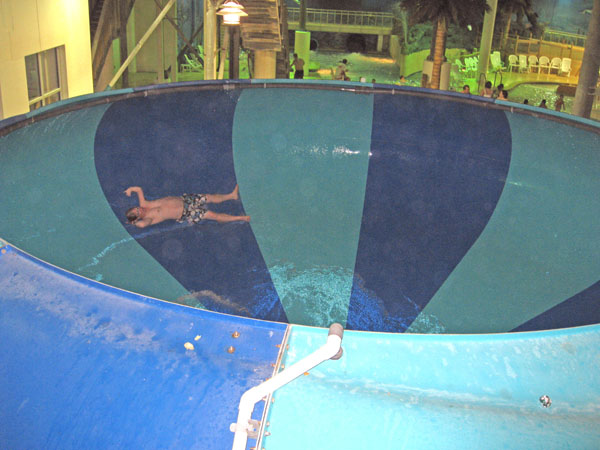 Avery and I tackled all of their wildest rides and both agreed that the Hurricane Plunge was the scariest!  Riders on this slide travel down a dark, three-story, serpentine tube, traveling at speeds up to 45 miles per hour, they then swirl around a funnel-shaped bowl, then finally splash down into a plunge pool.  I thought I’d be clever and come out of the tube with my hands and head held high in the Shortarmguy pose, but was stunned back into reality when my head slammed back hard onto the plastic surface.  That will learn me. 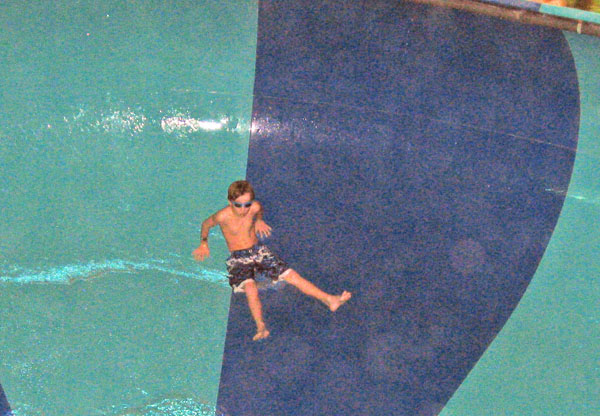 Avery laughed at this picture because he thought it looks like he has boobs like a girl in it.  I told him I didn’t see it, but just in case he needed to start wearing a bikini top when we go to the water park in the future. 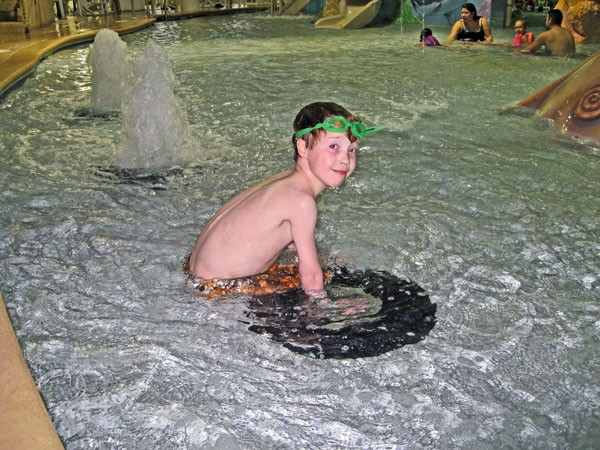 Luke’s not really big into sliding down the dark tunnels, so he and Miss Sheri hang out while we go off on our adventures.  When I came back to find him later, I found him sitting on this fountain.  I tried to tell him that although it is important to maintain a clean colon for long term health, he probably didn’t need to worry about such things at his age.  He just gave me a confused look and went back to resume his enema. 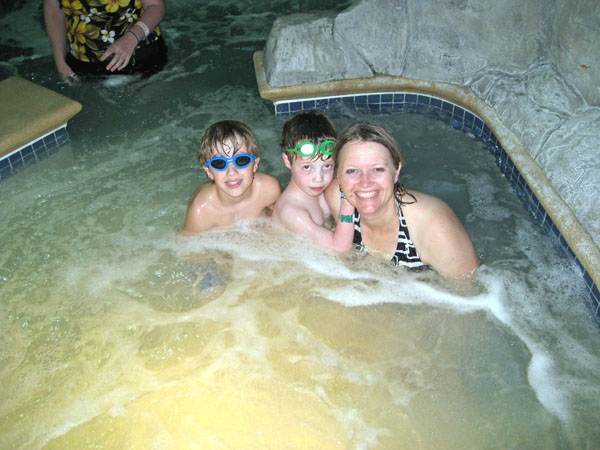 Miss Sheri and the boys play a game in the hot tub where they each pass gas and then try to guess which bubbles are real and which ones they personally generated.  I tend to avoid them when they play this game. 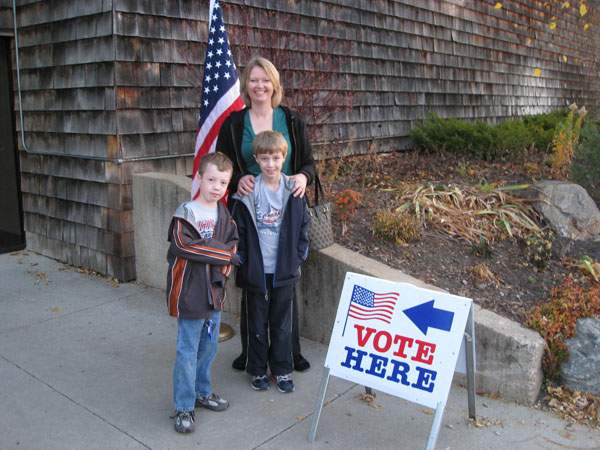 On Tuesday morning, the Shortarmguy Family exercised our civic duty to go out and vote.  Although we were there bright and early, the lines were already very long!  I guess people were kind of interested in this year’s elections for some reason. 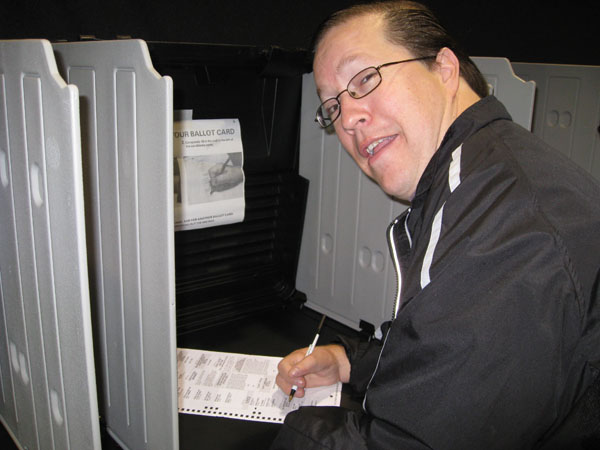 Although I tended to vote for mainly losing candidates this year, it sure was fun waiting in line to scribble on that piece of paper for a few minutes!  I even received a little red sticker for my efforts!

great stuff loved every minute of looking at pages, keep up the great work!

How to Avenge a Speeding Ticket

Shadows of the City 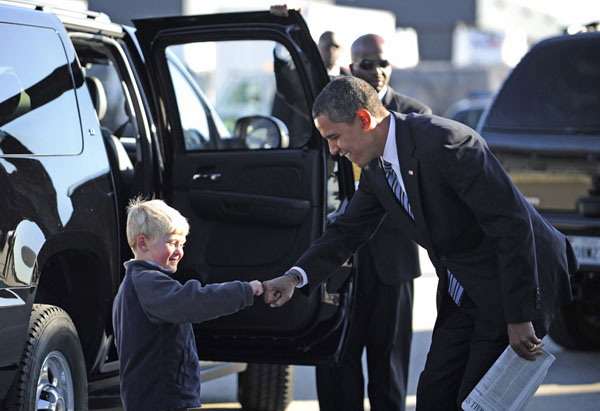 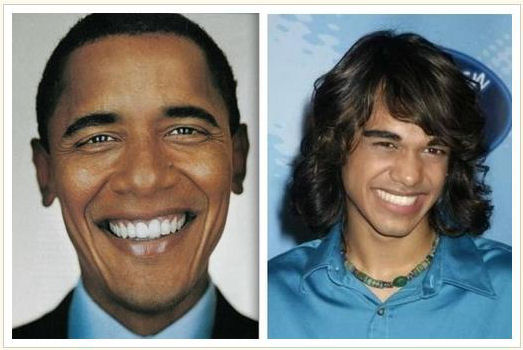 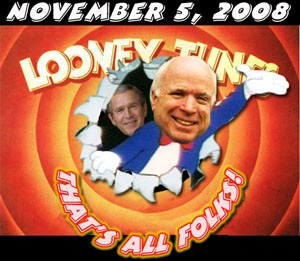 I think our education system is just fine! 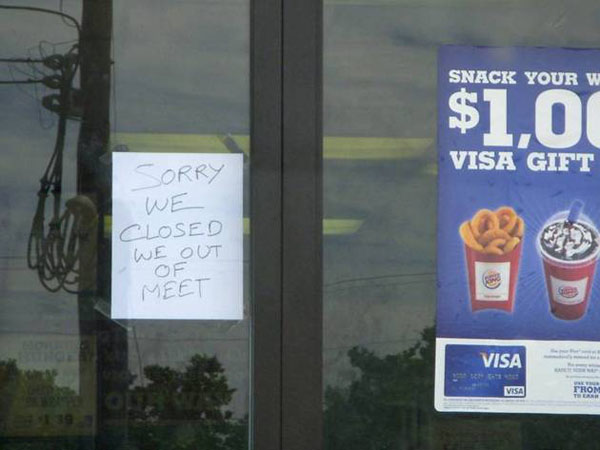 I swear I see a nut on this tree… 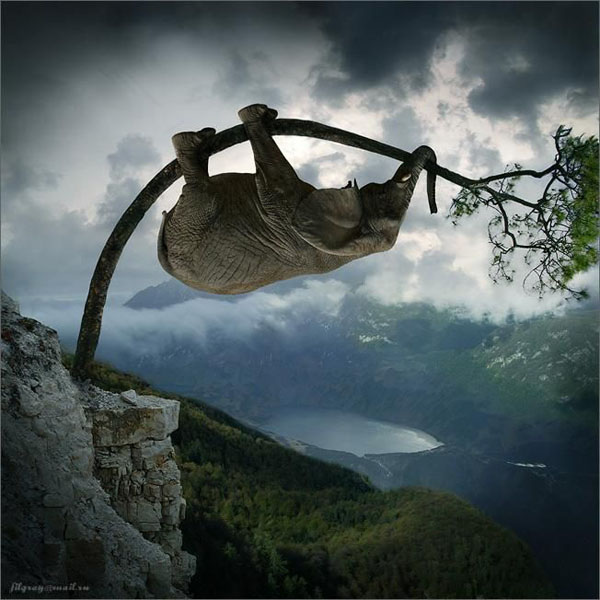 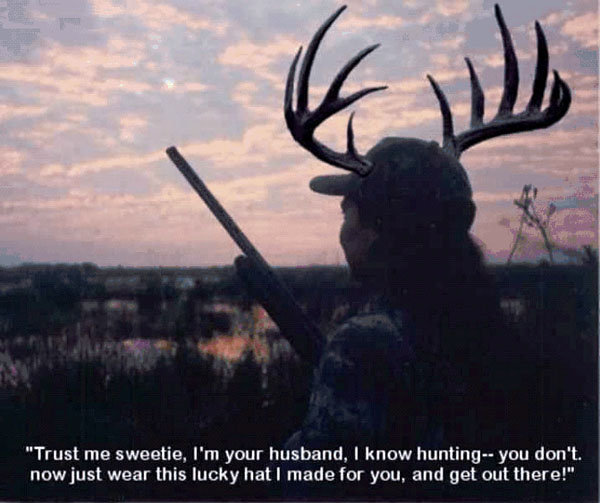 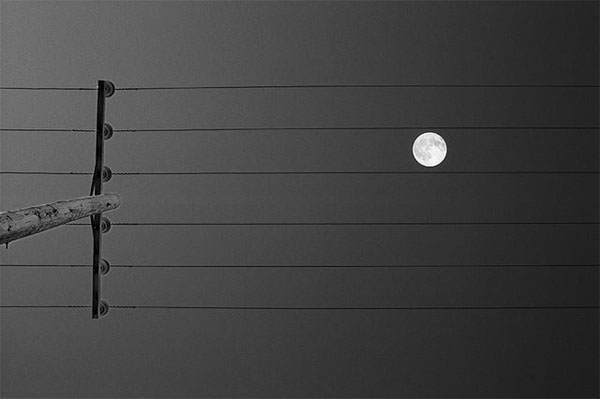 For some reason, I don’t have a good feeling about this marriage… 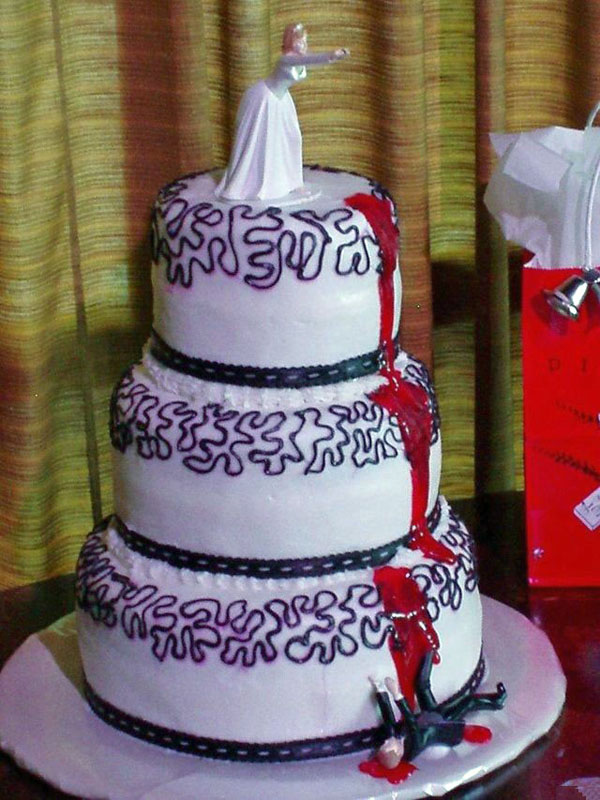 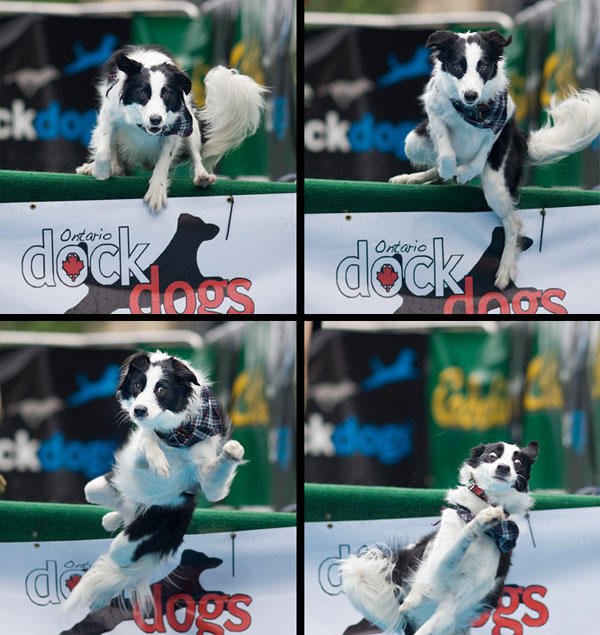 Those girls are just always on my mind… 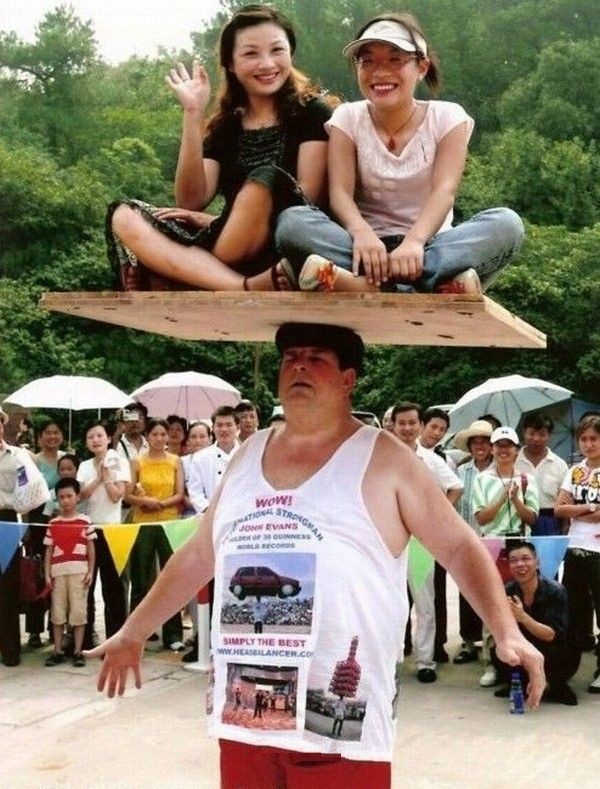 “You make the world a better place by making yourself a better person.”

I will never hear church bells ringing again without smiling.
Upon hearing that her elderly grandfather had just passed away, Katie went straight to her grandparent’s house to visit her 95-year-old grandmother and comfort her. When she asked how her grandfather had died, her grandmother replied, “He had a heart attack while we were making love on Sunday morning.” Horrified, Katie told her grandmother that 2 people nearly 100 years old having sex would surely be asking for trouble
“Oh no, my dear,” replied granny. “Many years ago, realizing our advanced age, we figured out the best time to do it was when the church bells would start to ring. It was just the right rhythm. Nice and slow and even. Nothing too strenuous, simply in on the Ding and out on the Dong.”
She paused to wipe away a tear, and continued, “He’d still be alive if the ice cream truck hadn’t come along.

Todd Swank, vice president of marketing at Nor-Tech, a Burnsville, Minn.-based system builder, was surprised by the move, given Microsoft’s history of sticking to its guns when it comes to price.

Home Server continues to generate market interest, but the complexity involved in setting up the software has this far limited its appeal to tech-savvy users, according to Swank. “Everyone who uses Home Server loves it, but it just intimidates the hell out of home users,” he said.

South Park  —- You have to watch this post election South Park episode!!

I put my carry-on in the luggage compartment and sat down in my
Assigned seat.  It was going to be a long flight. “I’m glad I have a
Good book to read. Perhaps I will get a short nap,” I thought.  Just before take-off, a line of soldiers came down the aisle and filled all the  vacant seats, totally surrounding me.  I decided to start a  conversation.  “Where are you headed?” I asked the soldier seated nearest  to me.

“Chicago – to Great Lakes Base.  We’ll be there for two weeks for
Special training,  and then we’re being deployed to Iraq
” After flying for about an hour, an announcement was made that sack lunches were  available for five dollars.  It would be several hours before we reached  Chicago, and I quickly decided a lunch would help pass the time.    As I reached for my wallet, I overheard a soldier ask his buddy if he planned to buy  lunch.  “No, that seems like a lot of money for just a sack lunch. Probably wouldn’t be worth five bucks.  I’ll wait till we get to Chicago.

His friend agreed. I looked around at the other soldiers.  None
Were buying lunch. I  walked to the back of the plane and handed
The flight attendant a fifty dollar  bill.  “Take a lunch to all
Those soldiers.” She grabbed my arms and  squeezed tightly.  Her
Eyes wet with tears, she thanked me.  “My  son was a soldier in
Iraq; it’s almost like you are doing it for him.”

Picking up ten sacks, she headed up the aisle to where the soldiers
Were seated.  She stopped at my seat and asked, “Which do you like
Best – beef or  chicken?”

“Chicken,” I replied, wondering why she asked.  She turned and went to the front of  plane, returning a minute later with a dinner plate from first class.  “This is your thanks.” After we finished eating, I went again to the back of the plane, heading for the rest room.  A man stopped me.  “I saw what you did.  I want to be part  of it.  Here, take this.”  He handed me twenty-five dollars.

Soon after I returned to my seat, I saw the Flight Captain coming down the aisle,  looking at the aisle numbers as he walked, I hoped he was not looking for me,  but noticed he was looking at the numbers only on my side of the plane.  When he got to my row he stopped, smiled, held out his hand, and said, “I want to  shake your hand.”

Quickly unfastening my seatbelt I stood and took the Captain’s
Hand.  With a  booming voice he said, “I was a soldier and I was a
Military pilot.  Once, someone bought me a lunch.  It was an act
Of kindness I never  forgot.”  I was embarrassed when applause was
Heard from all of the  passengers.

Later I walked to the front of the plane so I could stretch my
Legs.  A man who was  seated about six rows in front of me reached
Out his hand, wanting to shake  mine.  He left another twenty-five
Dollars in my palm.

When we landed in Chicago I gathered my belongings and started to deplane.  Waiting  just inside the airplane door was a man who stopped me, put something in my  shirt pocket, turned, and walked away without saying a word.  Another  twenty-five dollars!

Soon entering the terminal, I saw the soldiers gathering for their
Trip to the  base.  I walked over to them and handed them
Seventy-five dollars.  “It will take you some time to reach the
Base. It will be about time for a  sandwich.  God Bless You.”
Ten young men left that flight feeling the love and respect of their
Fellow  travelers.  As I walked briskly to my car, I whispered a
Prayer for their  safe return.  These soldiers were giving their all
For our country.  I  could only give them a couple of meals. It
Seemed so little…

A veteran is someone who, at one point in his life wrote a  blank
Check Made payable to “The United States of America ” for an amount of “up  to and including my life.” That is Honor, and there are way too many people in  This country who no longer understand it.”