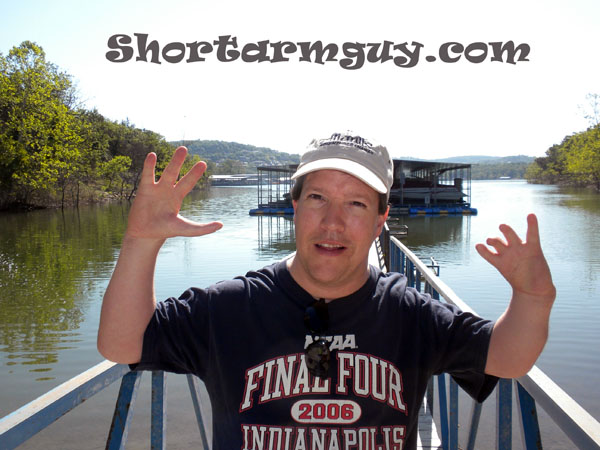 This week, we took a road trip down to Branson, Missouri.  Along the way we stopped to see our good friend, the one and only Krazy Kory.  He’s currently managing a 53 room hotel all by himself!  I’m still amazed that someone trusted him with that responsibility.  I must admit the place looked fabulous!   I kind of expected to pull up to a pile of smoldering embers and Kory by the roadside wearing a Beavis and Butthead expression shouting “Fire, Fire Fire”.  Instead, I was pleasantly surprised by his accomplishments. 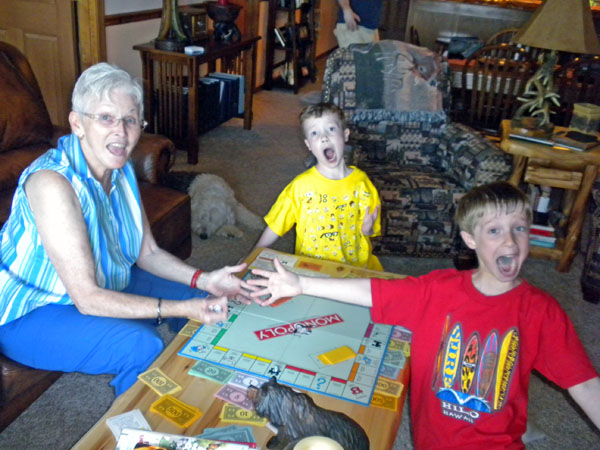 The reason for our trip was to visit, Grandma Joyce, who we hadn’t seen since my father left us last summer. She and the boys started screaming at each other the second they saw one another.  Luckily, it lasted only the first few hours that we were together. 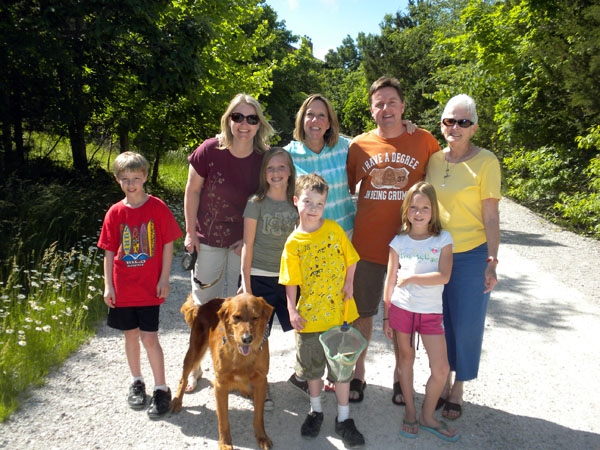 My sister, Tracy, and her family also drove up from Dallas to join us.  Pandemonium is always certain to ensue whenever this group gets together. 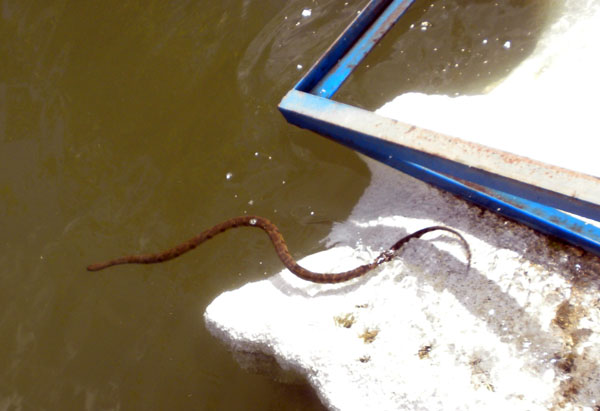 Grandma lives on Table Rock Lake which is chock full of all sorts of fun critters that the boys like to try to catch including fish, turtles and frogs.  For some reason, Luke decided to pull his net out of the water when this snake came up to pay us a visit, though.  Not sure why. 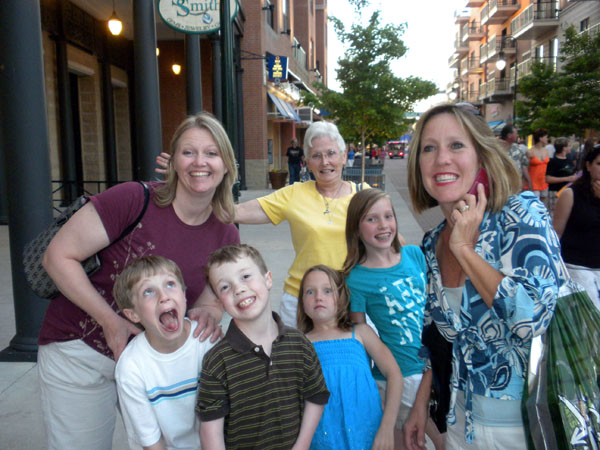 We had a lot of fun going down to The Landing in Branson which is an outdoor mall full of really neat shops and restaurants.  We know Aunt Tracy just loves spending time with all of us because she’s constantly on the phone with her friends back home telling them how much fun she’s having.  At least that’s what I think she’s telling them… 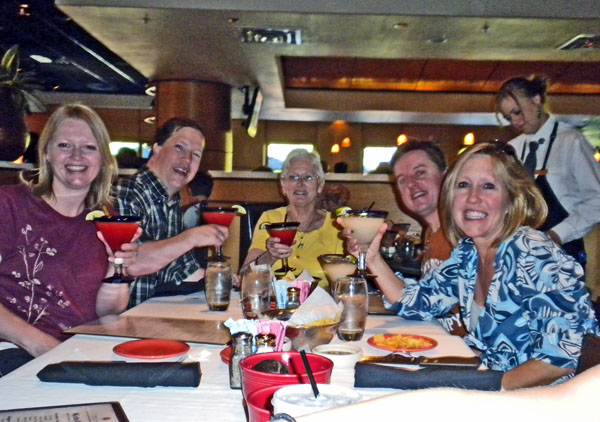 We ate at a restaurant called Cantina Laredo.  They had incredible margaritas and made fresh guacamole right at your table.  It was so authentic Mexican that I swear that I saw a table close by full of people suffering from the Swine Flu, but no-one else would believe me. 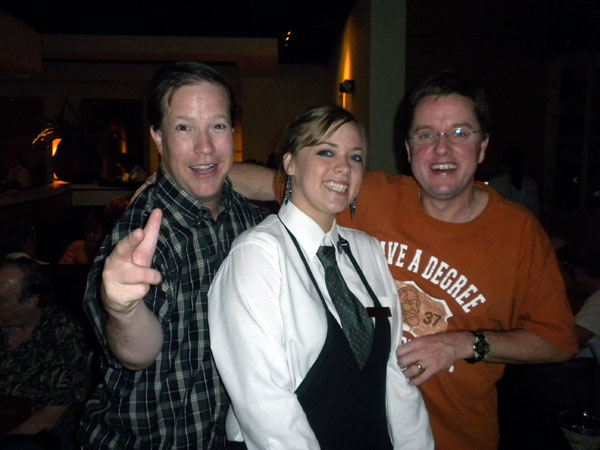 This is Kayla.  She was our waitress for the night.  I told her she bore a striking resemblance to Scarlet Johansson.  She said that no-one had ever told her that before.  I then asked her if I could have a discount off our bill since I was the first, but she just kind of looked at me funny. 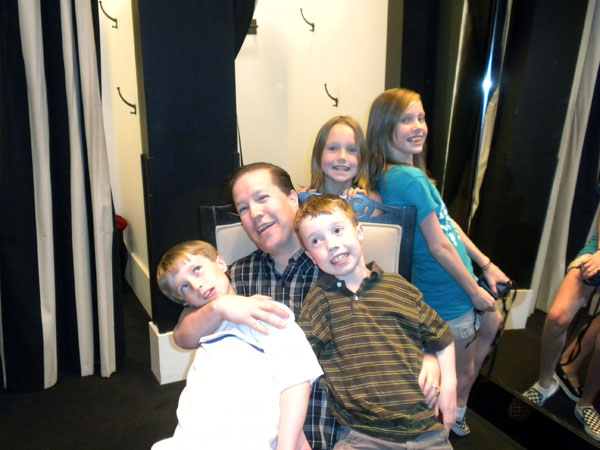 Aunt Tracy decided to do some clothes shopping which is one of the favorite things for my boys to do.  We had all sorts of fun getting rowdy in the dressing room waiting areas.  I tried to teach my boys about the benefits of peeking under the doors into the various rooms, but I guess they’re just not old enough to enjoy that sort of thing yet. 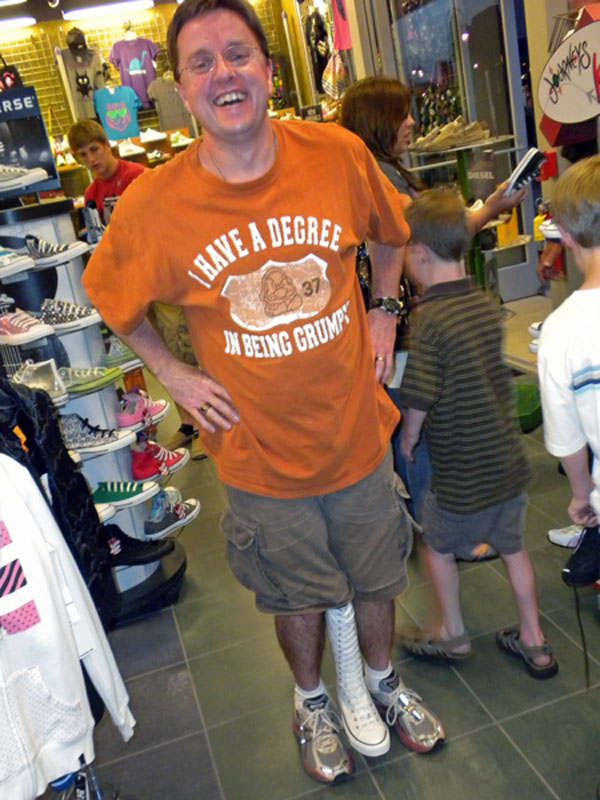 Uncle Dave has always bragged about his middle leg.  But this was the first time I’ve ever seen him put a shoe on it.

Hi!
This is Emma from Sweden!
Two days ago I saw You in the episode of Miami Ink!
And I just need to say that Your tattoo are very very nice!
And I liked you for being a happy person and always a smile on Your lips!

I felt I needed to say this few words!

Incredible Video of a Jumbo Landing!

This probably wasn’t mentioned in the safari travel brochure… 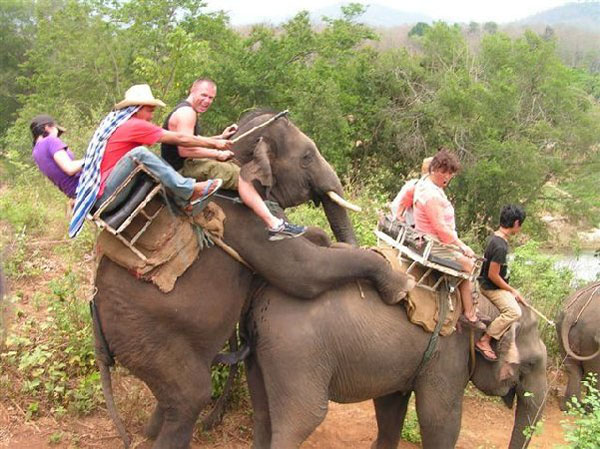 They thought the picture with the walrus would be a great Family Photo Opportunity!

How I Play Tennis! 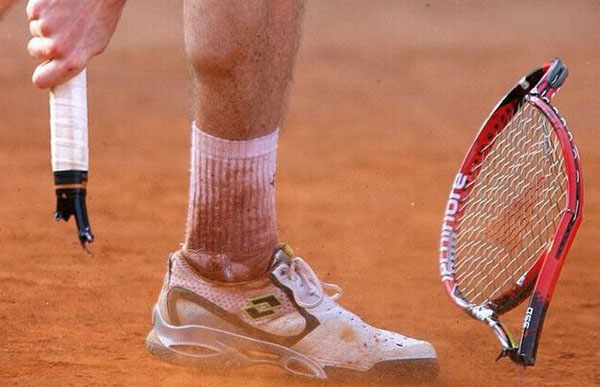 More evidence of how Swine Flu was started… 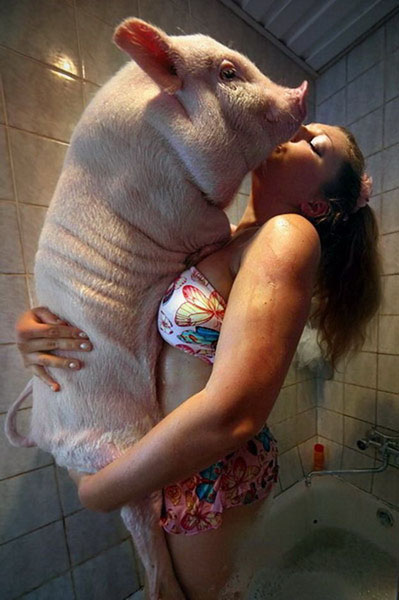 How to catch a great white shark…

ATTENTION: ALL BORDER PATROL AGENTS
“Be on the lookout for a `51 Chevy, Red with White top” 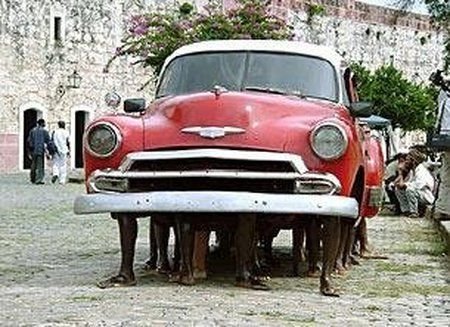 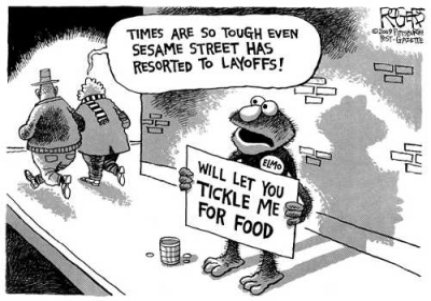 I plead not guilty.

I did not see a light; and besides ~ there is no light on that corner. I checked the next morning……..

The driver hit the left turn light and sheared off the light post  at the base, and then kept driving on about 2 miles to Squires Four Pub, where he stopped for more beer!! How impaired do you have to be to NOT notice that you are carrying a stop light?  ( I Wonder if the light was green? )

The truck was towed about 2.5 miles to the Vernon towing yard, with the light still pinched between the two tow hooks and the bumper bent around it

It took several good hard pulls with a backhoe to get the pole free. Now that’s what you call drunk driving. 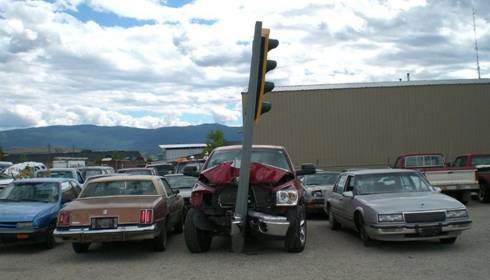 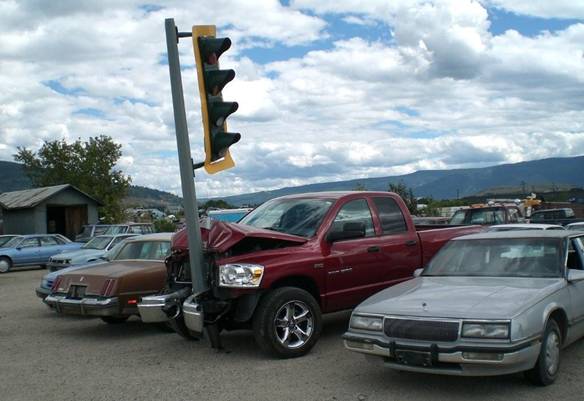 The US Air Force has developed a great way to scare birds away from their planes! 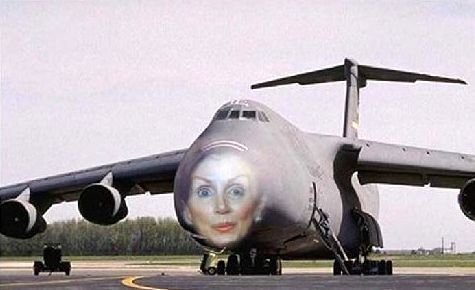 “Do what you can, with what you have, where you are.”

Don’t know if this is just a sick coincidence but….

2009 – Chinese year of the Pig – Swine Flu Pandemic kills hundreds of pigs around the globe.

Greatest T-Shirt Ever! — Don’t believe me?  Just read the reviews…

I just wanted to get the day over with and go down to Smokey’s.
Sneaking a look at my watch, I saw the time, 1655.  Five minutes to go
before the cemetery gates are closed for the day.  Full dress was hot
in the August sun. Oklahoma summertime was as bad as ever — the heat
and humidity at the same level — both too high.

I saw the car pull into the drive, ’69 or ’70 model Cadillac Deville,
looked factory-new.  It pulled into the parking lot at a snail’s pace.
An old woman got out so slow I thought she was paralyzed; she had a
cane and a sheaf of flowers — about four or five bunches as best I
could tell.

I couldn’t help myself.  The thought came unwanted, and left a
slightly bitter taste:  ‘She’s going to spend an hour, and for this
old soldier, my hip hurts like crazy and I’m ready to get out of here
right now!’  But for this day, my duty was to assist anyone coming in.

Kevin would lock the ‘In’ gate and if I could hurry the old biddy
along, we might make it to Smokey’s BBQ in time.

I broke post attention.  My hip made gritty noises when I took the
first step and the pain went up a notch.  I must have made a real
military sight:  middle-aged man with a small pot gut and half a limp,
in marine full-dress uniform, which had lost its razor crease about
thirty minutes after I began the watch at the cemetery.

I stopped in front of her, halfway up the walk.  She looked up at me
with an old woman’s squint.
‘Ma’am,may I assist you in any way?’

She took long enough to answer.
‘Yes, son.  Can you carry these flowers?  I seem to be moving a tad
slow these days.’

She looked again.  ‘Marine, where were you stationed?’

She headed for the World War I section, stopping at a stone.  She
picked one of the flowers out of my arm and laid it on top of the
stone.  She murmured something I couldn’t quite make out. The name on
the marble was Donald S. Davidson, USMC: France 1918

She turned away and made a straight line for the World War II section,
stopping at one stone.  I saw a tear slowly tracking its way down her
cheek.  She put a bunch on a stone; the name was Stephen X.Davidson,
USMC, 1943.

She went up the row a ways and laid another bunch on a stone, Stanley
J. Wieserman, USMC, 1944.
She paused for a second.  ‘Two more, son, and we’ll be done’

She looked confused. ‘Where’s the Vietnam section, son?  I seem to
have lost my way.’
I pointed with my chin.  ‘That way, ma’am.’
‘Oh!’ she chuckled quietly.  ‘Son, me and old age ain’t too friendly.’

She headed down the walk I’d pointed at.  She stopped at a couple of
stones before she found the ones she wanted.  She placed a bunch on
Larry Wieserman, USMC, 1968, and the last on Darrel Wieserman, USMC,
1970.  She stood there and murmured a few words I still couldn’t make
out.
‘OK, son, I’m finished.  Get me back to my car and you can go home.’

‘Yes, Donald Davidson was my father, Stephen was my uncle,
Stanley was my husband,
Larry and Darrel were our sons.
All killed in action, all marines.

She stopped.  Whether she had finished, or couldn’t finish, I don’t
know.  She made her way to her car, slowly and painfully.
I waited for a polite distance to come between us and then
double-timed it over to Kevin, waiting by the car.

Kevin started to say something, but saw the look I gave him.  He broke
the rules to get us there down the service road.  We beat her.  She
hadn’t made it around the rotunda yet.

‘Kevin, stand at attention next to the gatepost.  Follow my lead.’
I humped it across the drive to the other post.

When the Cadillac came puttering around from the hedges and began the
short straight traverse to the gate, I called in my best gunny’s
voice:
‘TehenHut!  Present Haaaarms!’

I have to hand it to Kevin; he never blinked an eye — full dress
attention and a salute that would make his DI proud.

She drove through that gate with two old worn-out soldiers giving her
a send-off she deserved, for service rendered to her country, and for
knowing duty, honor and sacrifice.
I am not sure, but I think I saw a salute returned from that Cadillac.
Instead of ‘The End,’ just think of ‘Taps.’

As a final thought on my part, let me share a favorite prayer:
‘Lord, keep our servicemen and women safe, whether they serve at home
or overseas.  Hold them in your loving hands and protect them as they
protect us.’
Let’s all keep those currently serving and those who have gone before
in our thoughts. They are the reason for the many freedoms we enjoy.

Sorry about your monitor; it made mine blurry too!

If we ever forget that we’re one nation under God, then we will be a
nation gone under!

More Emails That Made Me Think