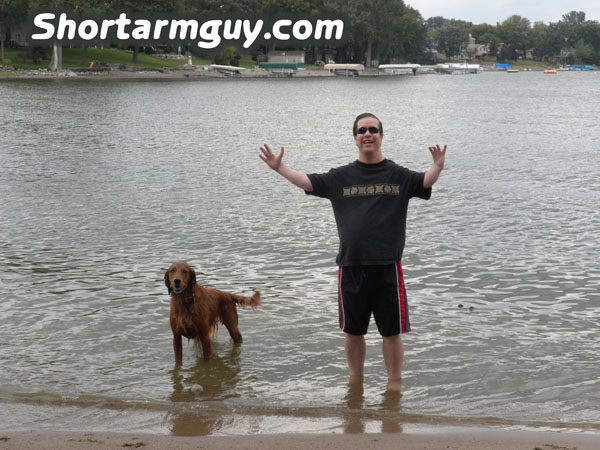 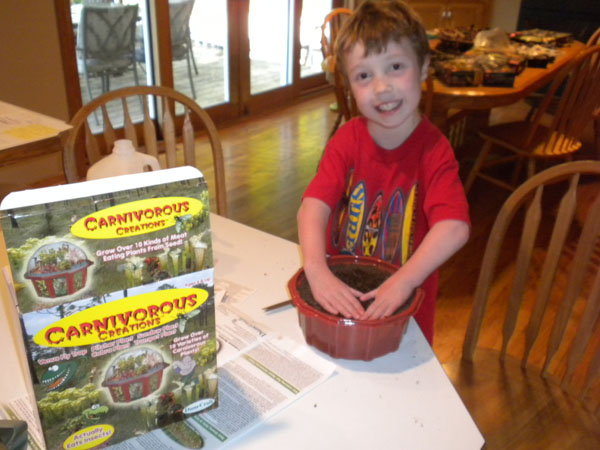 Luke has been obsessed with Carnivorous Plants for quite awhile, but we’ve never had any luck with getting any to thrive. We’d bought some Venus Flytraps about a year ago, but they died before they ever took a single bite of meat for us. Luke’s Aunt Laura gave him this set of creatures awhile ago and this week we set about to making them grow. Luke was thrilled about planting the seeds, but seemed disappointed afterwards when all he had was a bowl of dirt. I volunteered to eat some bugs for him in the mean time, but apparently that’s not the same thing that he wants. 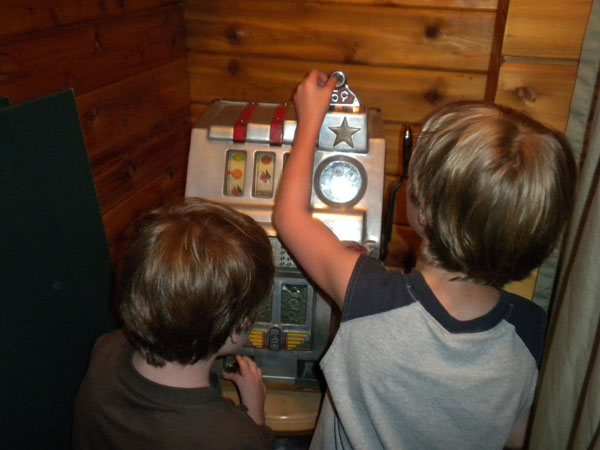 We’ve been pretty bored at home lately, so I figured it was time to teach the boys the art of gambling. I have an antique nickel slot machine that used to be my Grandfather’s. My dad told me it was once used in a an illegal casino in Chicago during the days of Al Capone and Prohibition. Now it’s being used to win back my son’s allowance money! 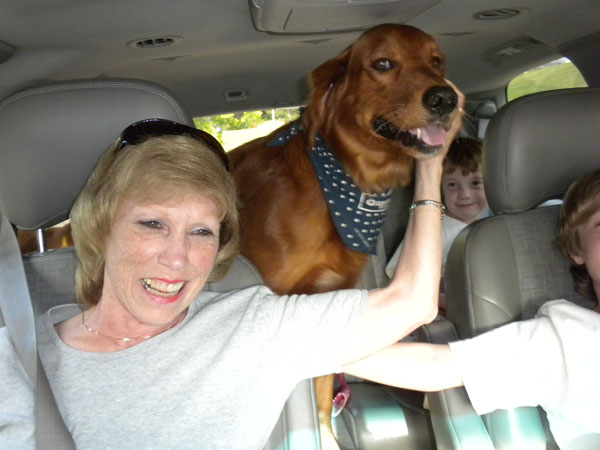 Things have been so dull lately that we actually went and picked up Grandma Linda and drove her around town while she challenged herself to see how many fingers she could get down the dog’s throat before he threw up. Three is the best we’ve been able to do so far. 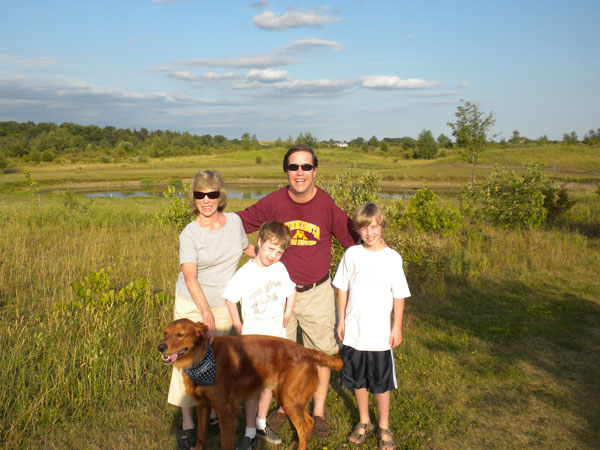 After we cleaned up the dog’s mess, we stopped by the dog park where it was an absolutely beautiful night. I asked mom if she also thought it was a beautiful night and she said “Yes, but I could see that the dog park would be really unpleasant if it were any hotter.” I told her she may want to read that book “The Power of Positive Thinking” again.

On Friday night, I took Miss Sheri to see that Sandra Bullock movie, The Proposal. It was cute, but kind of a silly story. I’ll still give it One Big Thumb Up! Not as big of a Thumb Up as I’d like to give to the Topless Firefly Lady that sits directly out of the box office at The Atlantis theater in Burnsville. She makes me want to keep coming back to the movies!! 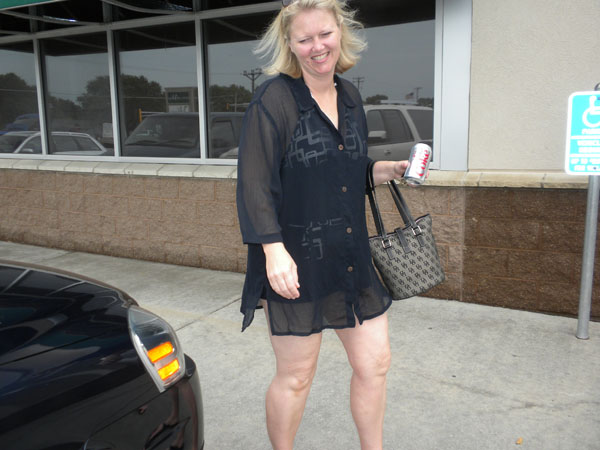 On Saturday, we were supposed to go to a pool party with some friends that was abruptly canceled at the last minute. On the drive home, we decided to stop and get some lunch. Miss Sheri forgot that she was only wearing her swimsuit and cover until right before we went into the store. I told her that it was summer time and nobody would think anything of it. 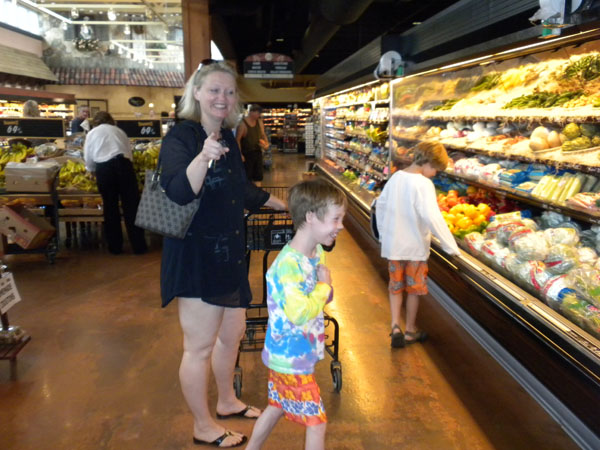 She did pretty good at hiding her embarrassment until I pulled out the camera and started snapping photos of her in the vegetable aisle. She then went back out to the van and insisted I finish the grocery shopping all by myself! 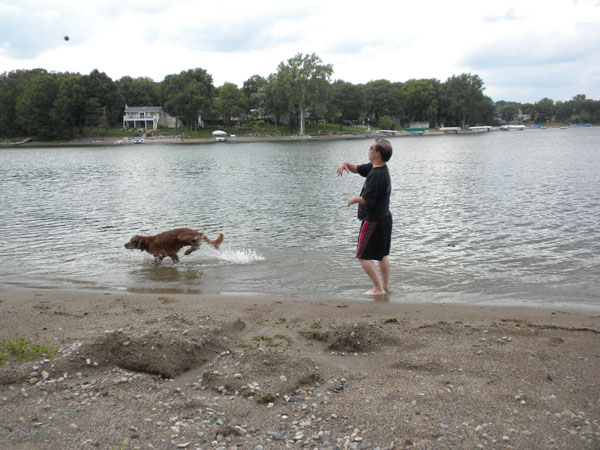 The rest of the day was filled with a rousing round of tennis ball catch with Sunny in the neighbor’s backyard.

Nobody can tell us that we don’t live a crazy lifestyle!! Nothing but pure adrenaline filled activities going on this summer at the Shortarmguy House!
Why you don’t want to ride a subway in China…
Sam The Bellhop
Motorcycle Garage Door Opener

The Cutest Ass You Will Ever See! 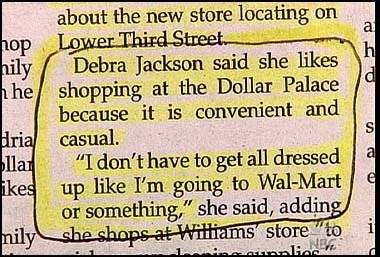 You Think Your Job Is Bad?

“The distance between you and your dreams is often the length of a single idea.”

What do you get when you mix PMS with GPS?

A crazy bitch who will find you

10) Your annual breast exam is done at Hooters.

(9) Directions to your doctor’s office include “Take a left when you enter the trailer park.”

(7) The only proctologist in the plan is “Gus” from Roto-Rooter.

(6) The only item listed under Preventative Care Coverage is “an apple a day.”

(5) Your primary care physician is wearing the pants you gave to Goodwill last month.

(4) “The patient is responsible for 200% of out-of-network charges,” is not a typographical error.

(2) Your Prozac comes in different colors with little M’s on them.

(1) You ask for Viagra, and they give you a Popsicle stick and duct tape.

Those who hammer their swords into plows…

will plow for those who do not”

If somebody is unable to understand THIS explanation, I have

serious doubts about their ability to even function in society,

much less run our country! As the late Adrian Rogers said,

“You cannot multiply wealth by dividing it.”

An economics professor at a local college made a statement

that he had never failed a single student before, but had

once failed an entire class.

That class had insisted that Obama’s socialism worked and

The professor then said, “OK, we will have an experiment

in this class on Obama’s plan”.

All grades would be averaged and everyone would receive

After the first test, the grades were averaged and everyone

got a “B”. The students who studied hard were upset and the

students who studied little were happy.

As the second test rolled around, the students who studied

little had studied even less and the ones who studied hard

decided they wanted a free ride too so they studied little.
The second test average was a “D”! No one was happy.

When the 3rd test rolled around, the average was an “F”.

The scores never increased as bickering, blame and name-

calling all resulted in hard feelings and no one would study

for the benefit of anyone else.

All failed, to their great surprise, and the professor told

them that socialism would also ultimately fail because,

when the reward is great, the effort to succeed is great,

but when government takes all the reward away, no one

will try or want to succeed.

Could not be any simpler than that.