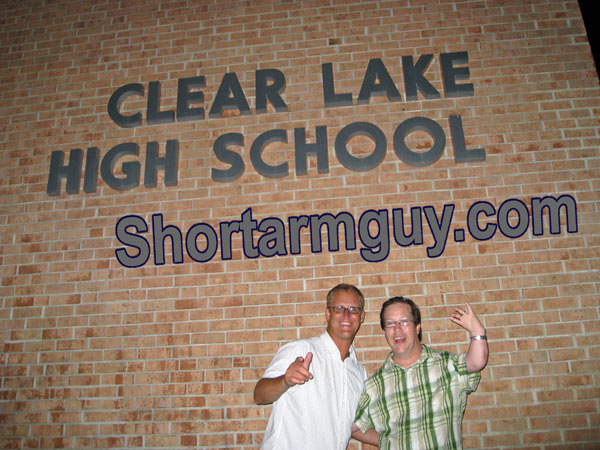 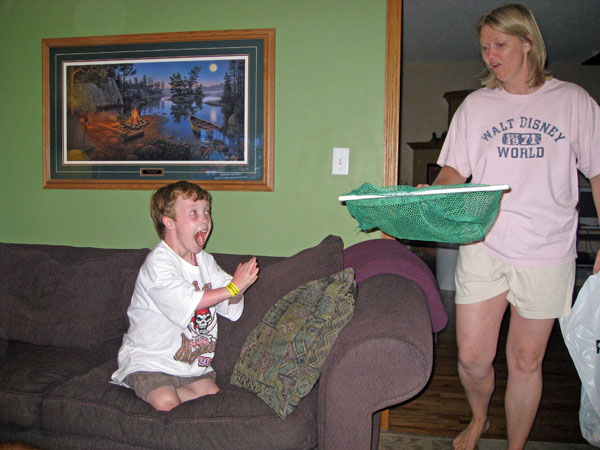 Monday was Luke and Avery’s 9th birthday.  They had a party at Grand Slam in Burnsville, but we waited until home to give them their presents.  As you can see, Luke was just a little bit excited to get a new net for going frog hunting.  Either that or else he might have just sat on a needle. 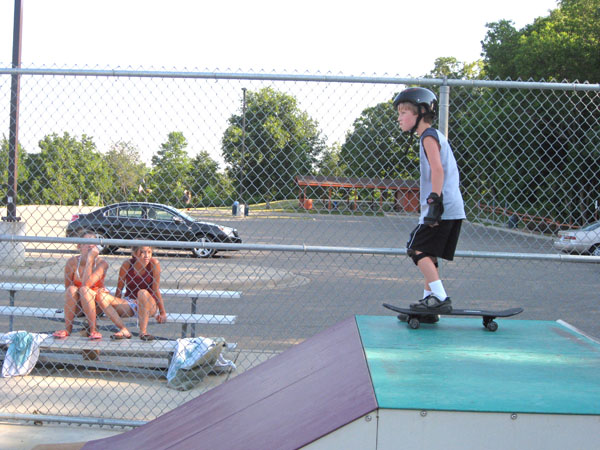 Avery was also pretty happy to get a new skateboard.  We went to the skate park where I’d challenged him to tackle this hill in the past, but he refused me.  On this particular day, though, there were a couple of young girls there who asked him to do it and he did it without hesitation!  What’s up with that?  I wonder if I could get them to tell him to quit beating on his brother? 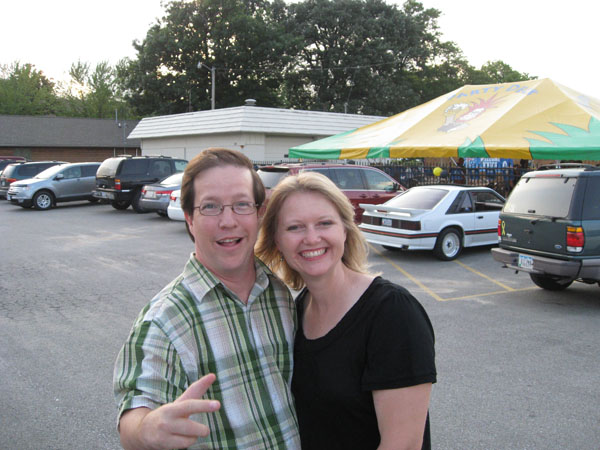 On Friday, Miss Sheri and I drove down to Iowa to spend the weekend without our children!!  It was like heaven to have two whole nights where we could be reckless and wild!  Normally the law forces us to be responsible parents during our weekends, so it was nice to be able to shake that burden for a change! 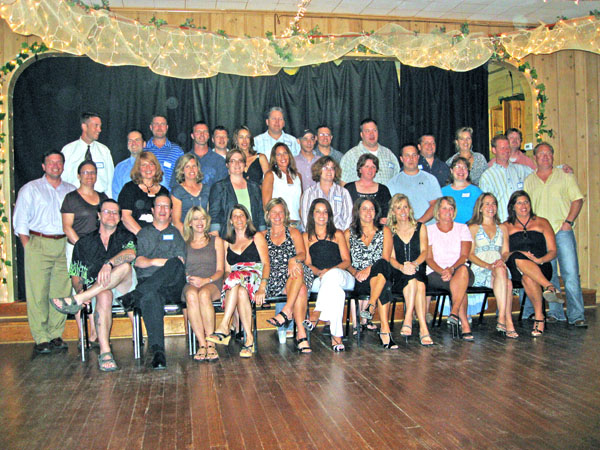 The reason we went down to Clear Lake was to celebrate my 20 year high school class reunion.  It was wild seeing how much people had changed and learning about all the cool things people are doing now. 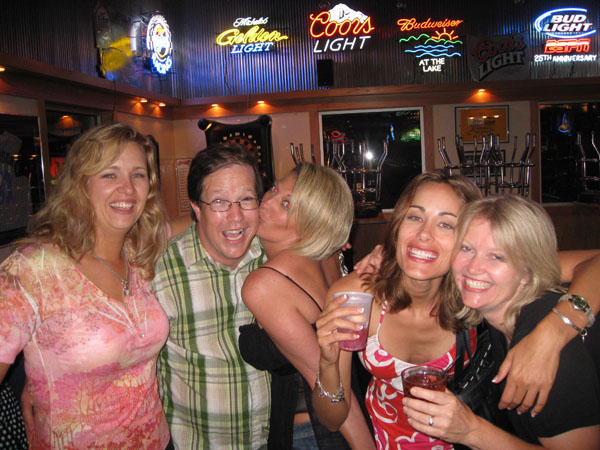 We had so much fun re-connecting with old friends that I’m thinking we should be having reunions like this on a monthly basis instead of every five or ten years. 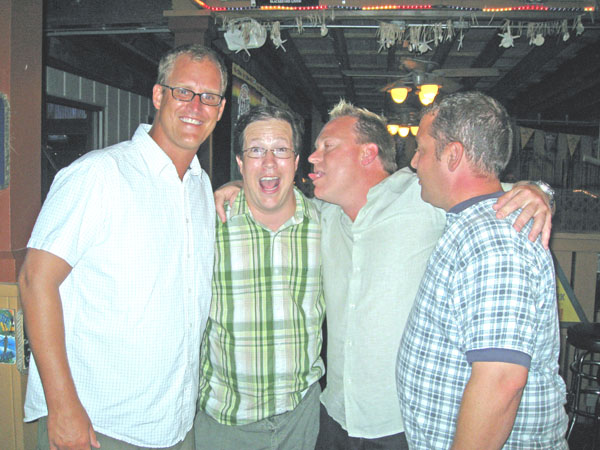 I don’t know why, but I’m starting to get the impression that I must taste pretty good. 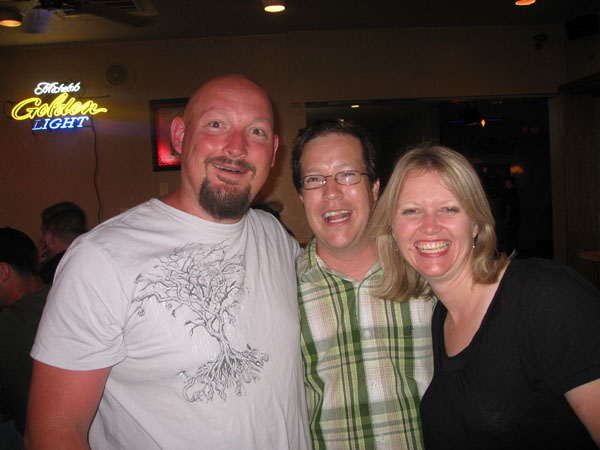 This is Tim.  We met for the first time very, very late on Friday at a bar called Rumorz.  Tim recognized me from Miami Ink and spent quite a bit of time telling me how inspired he was by my story on the show and from subsequent visits to this website.  I told Tim he’s my new best friend. 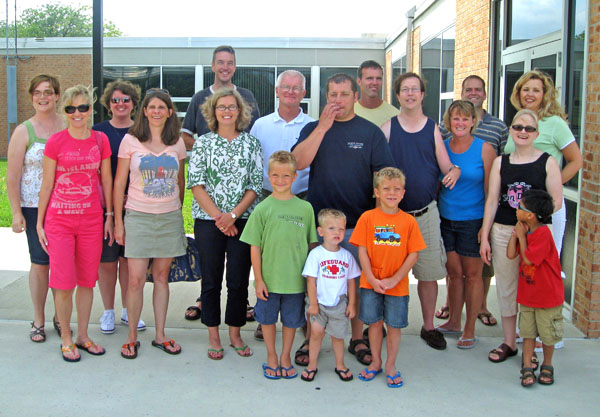 On Saturday afternoon a group of us went to the high school to have a tour of our old stomping ground.  They’ve done quite a bit of remodeling since we went there, so it didn’t bring back nearly as many memories as I thought it would.  The place just didn’t look that familiar to me.  I suppose it also has to do with the fact that I’ve killed so many of those brain cells that were once dedicated to the memories from high school.  Oh well. 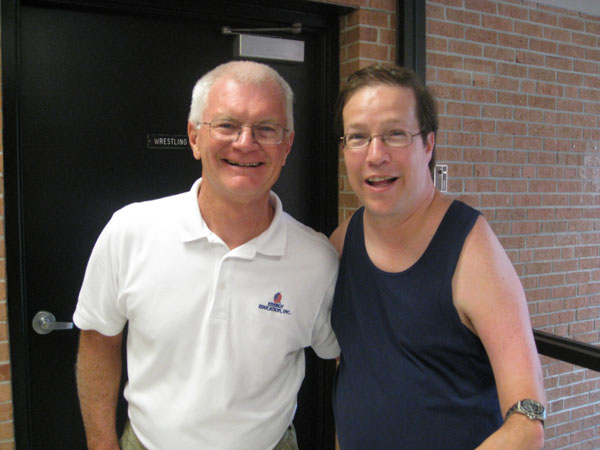 Our Economics Teacher, Mr. Calanan, was nice enough to share part of his Saturday giving us the tour.  I told him that he didn’t look any different than he did 20 years ago when he taught us, but he didn’t agree.  Then he sent me to the Principal’s Office for being disrespectful. 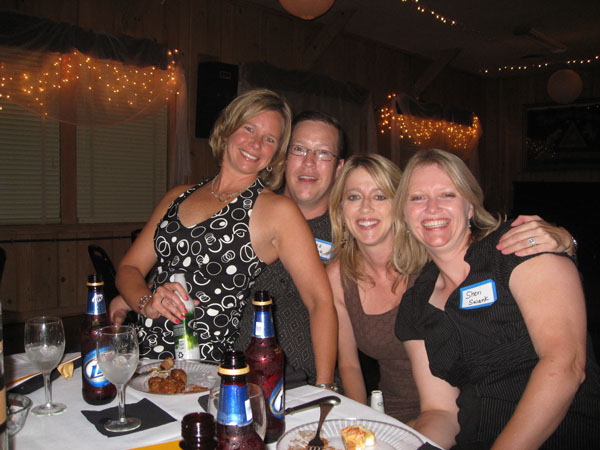 On Saturday night, we had a nice dinner at PM Park in Clear Lake.  The food was great, but sadly they were really short on seats so we had to share.  I didn’t mind at all except for the fact that it was a little bit hard to eat.  Also, I’ve been trying really hard to figure out exactly what Kelly was doing with her hand while this photo was being taken. 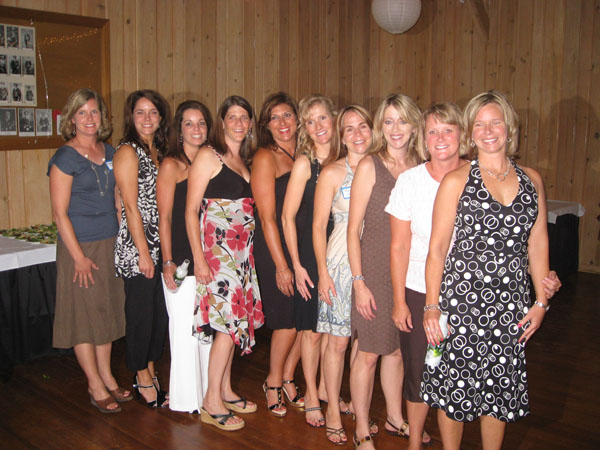 I didn’t realize this while going to school, but apparently there was some kind of height requirements for the girls in our grade.  If a girl fell out of a certain 3 inch range, she was kicked out of school. 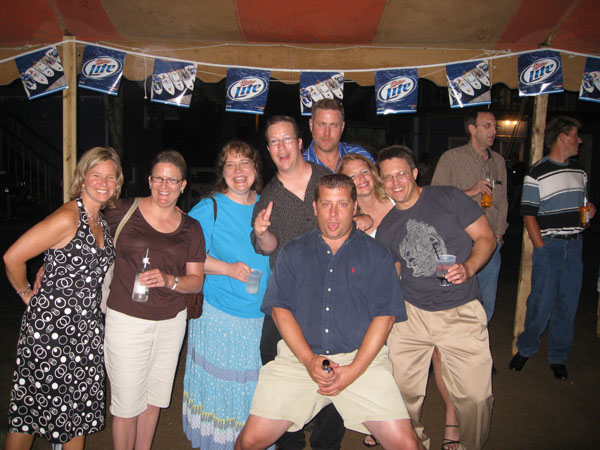 We had late nights both Friday and Saturday.  I tried to find a nice photo from the after events on Saturday night, but this is the cleanest one I could find.  In most of the other photos, Jason didn’t have his pants on.

I have a lot more photos from the reunion on this page here:

Just having one of those days… 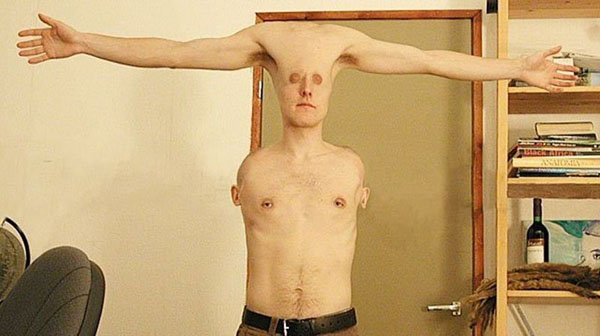 I gotta get me a pair of these… 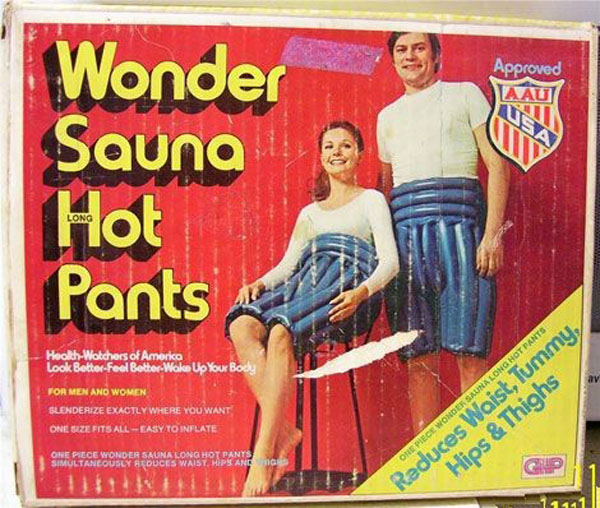 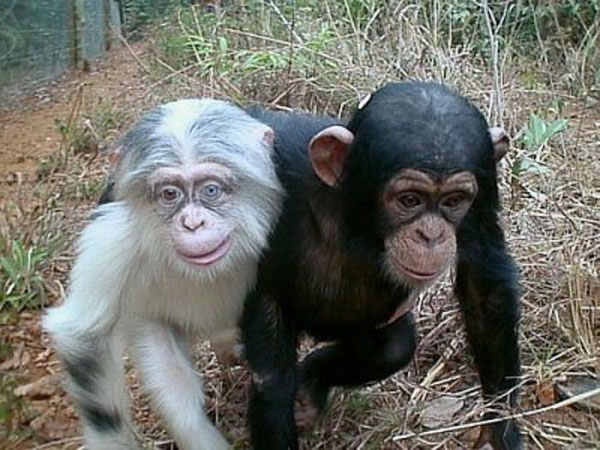 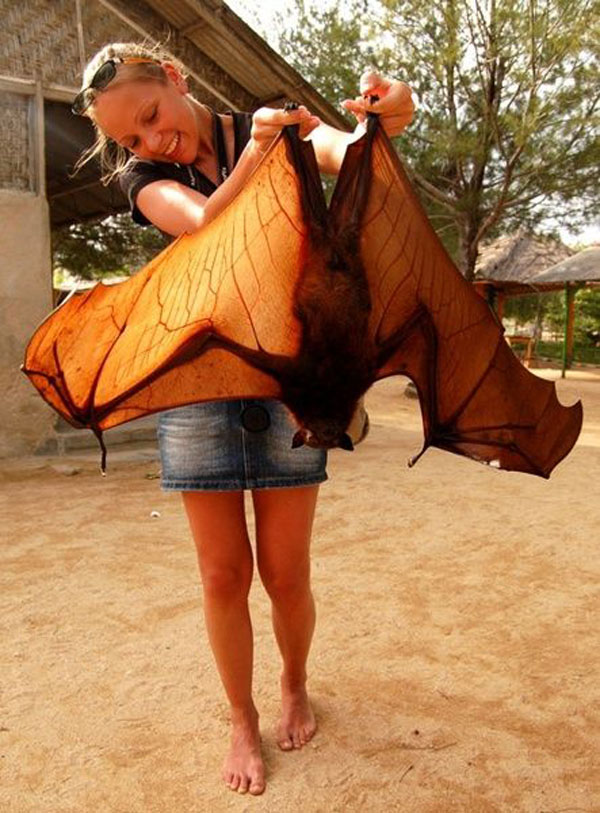 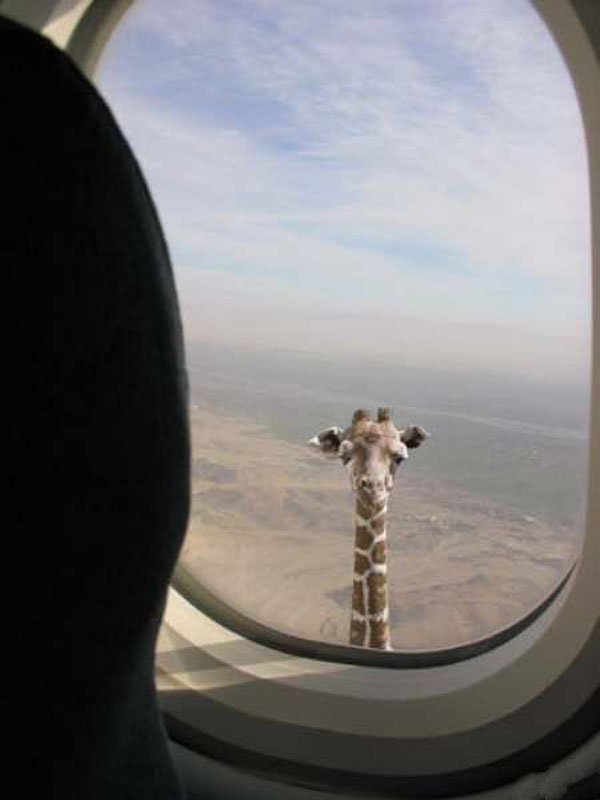 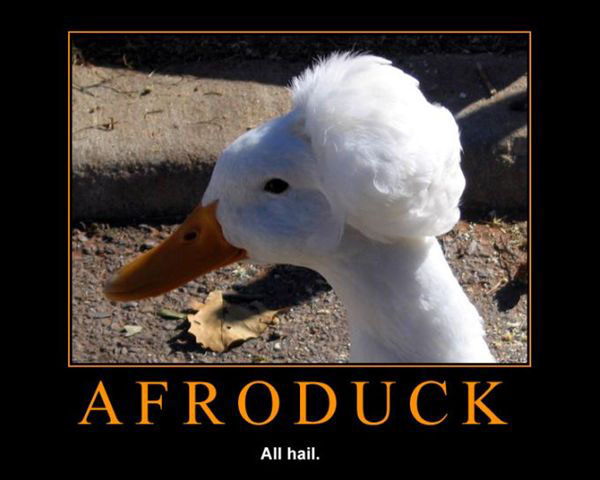 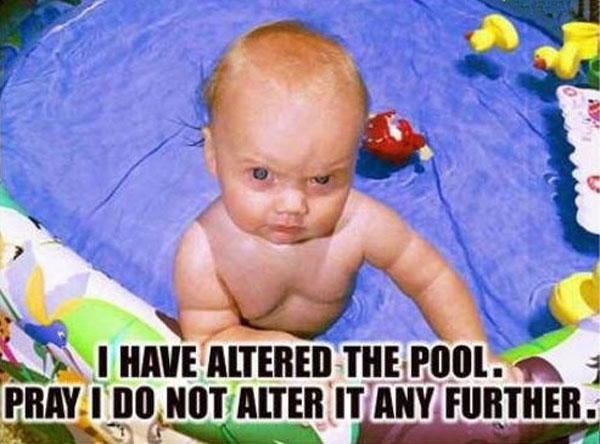 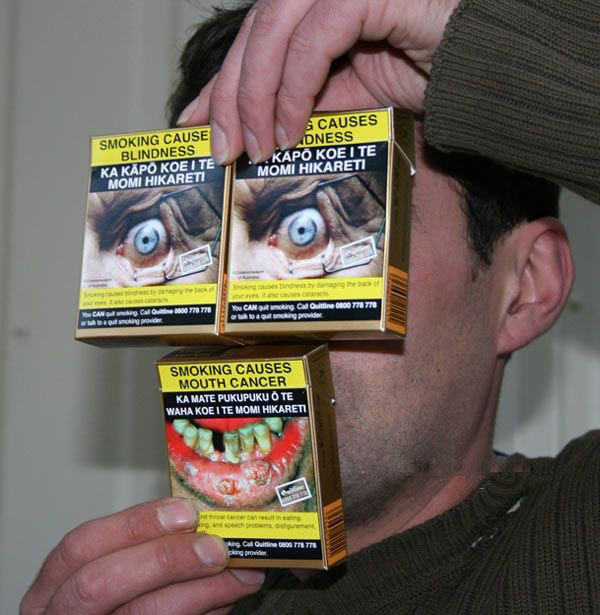 Can’t imagine why nobody will pick him up…. 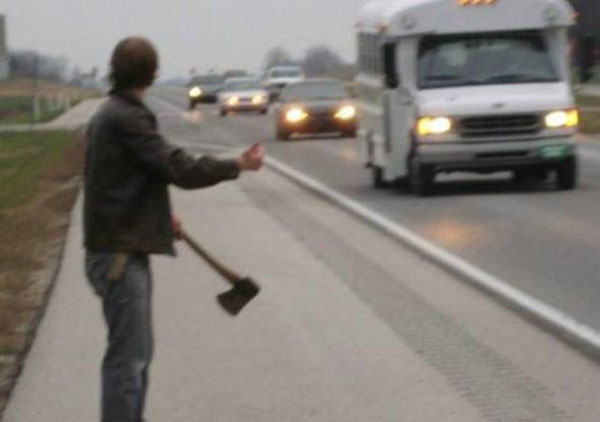 Someone really put his foot in his mouth! 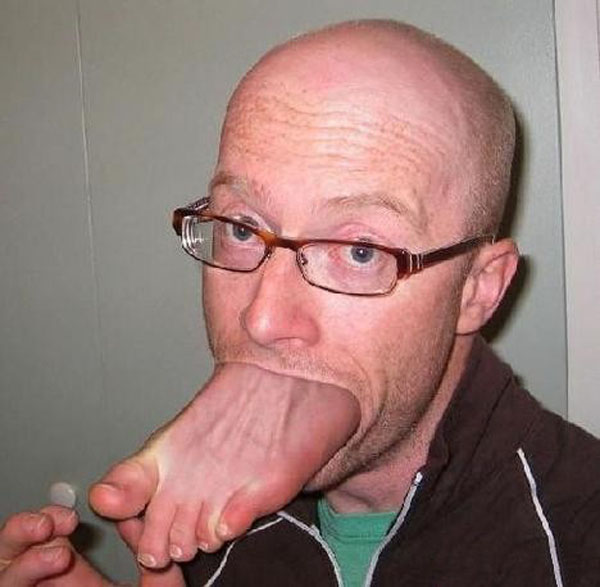 “Create the highest, grandest vision possible for your life, because you become what you believe”

A Florida couple, both well into their 80s, go to a sex therapist’s office.

The doctor asks, ‘What can I do for you?’

The man says, ‘Will you watch us have sexual intercourse?’

The doctor raises both eyebrows, but he is so amazed that such an elderly couple is asking for sexual advice that he agrees.

When the couple finishes, the doctor says, ‘There’s absolutely nothing wrong with the way you have intercourse.’

He thanks them for coming, he wishes them good luck, he charges them $50 and he says good bye.

This happens several weeks in a row.

The couple makes an appointment, has intercourse with no problems, pays the doctor, then leave.

Finally, after 3 months of this routine, the doctor says, ‘I’m sorry, but I have to ask. Just what are you trying to find out?’

The man says, ‘We’re not trying to find out anything.

She’s married so we can’t go to her house.

I’m married and we can’t go to my house.

Hi I just wanted to say that your a ver inspirational person..I enjoy
your website daily..I’m a struggling college student trying to get
buy..and everytime I read your website it makes me realize that my
struggles don’t compare to yours or someone else who has it worse..you
make me realize that what I have is a great thing..plus you make me
laugh..hehe..
Thank you so much..
Blessings..
Carleigh

The focus on OEMs, especially an ultimately disastrous deal with Dell (NSDQ:Dell) at the end of 2006, during Ruiz’ reign helped take away AMD’s primary differentiation from Intel, said Todd Swank, vice president of marketing at Nor-Tech, a Burnsville, Minn.-based system builder.

“And everybody used AMD to position themselves against Dell,” he said. “Then, boom, AMD signed Dell. The channel got neglected. AMD had to put all their resources behind Dell. They had fewer channel reps to deal with guys like us.”

AMD’s acquisition of ATI while Ruiz was at the helm became a huge distraction for the company, Swank said.

My boys thought this was the funniest thing they’d ever seen!