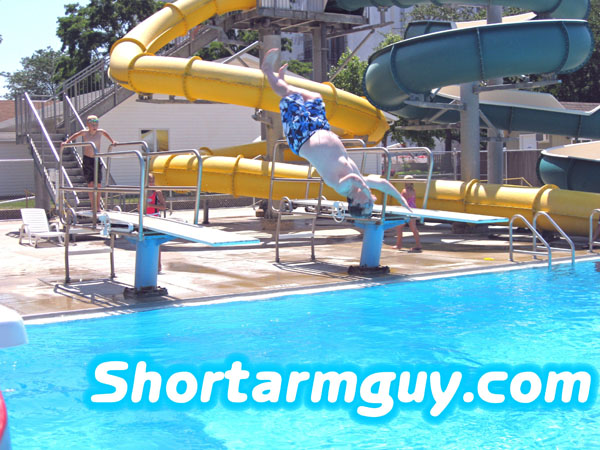 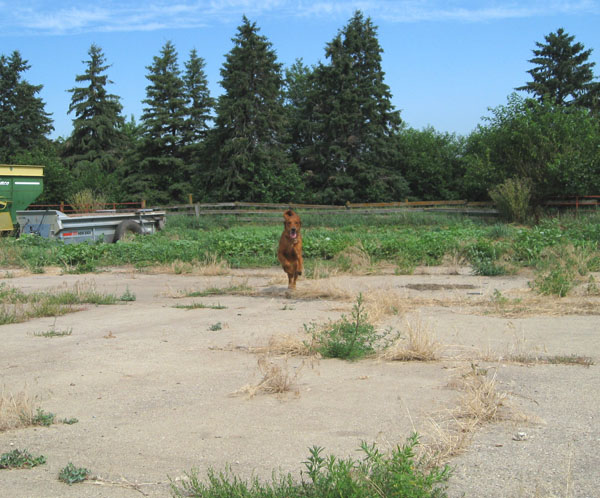 The Shortarmguy Family spent the weekend down at the farm in Inwood, Iowa.  Sunny was leaping for joy to be there….until he discovered that he was going to be locked in the back room for most of the day while we went to visit relatives.  Going out to pee in the morning sure was fun, though! 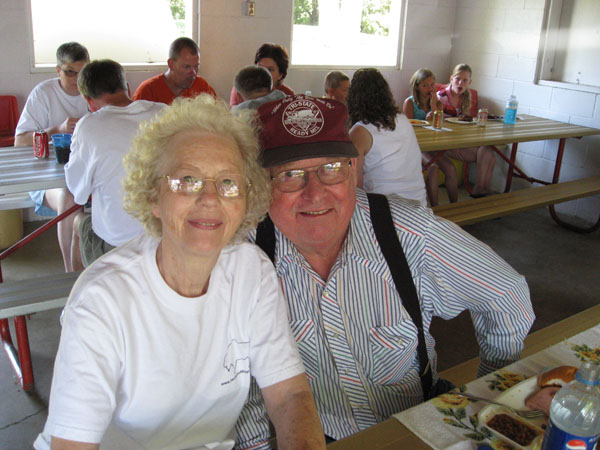 The reason we went to the farm was to enjoy the Timmerman Family reunion in Rock Rapids, Iowa.  The pot luck dinner was supreme as usual.  A little bit of chicken, taco salad, and snickers salad just makes me happy to be an American! 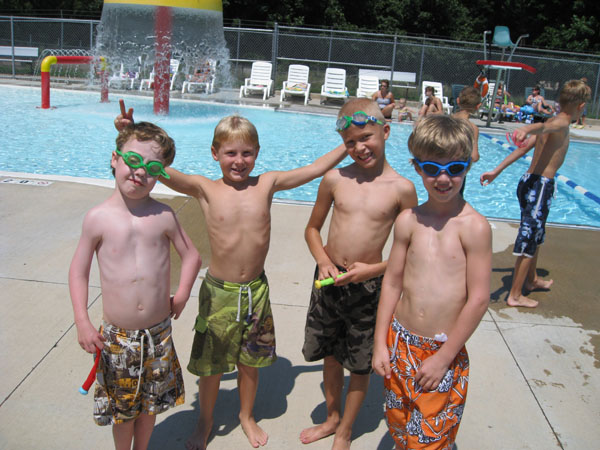 The family reunions used to consist of eating and then everyone sitting around talking, catching up with one another, and then everyone playing games together.  That was before Rock Rapids built their community pool near the park where we celebrate.  Now the celebration consists of us rapidly getting dinner together while the kids scream at us to hurry up and finish eating so we can go swimming! 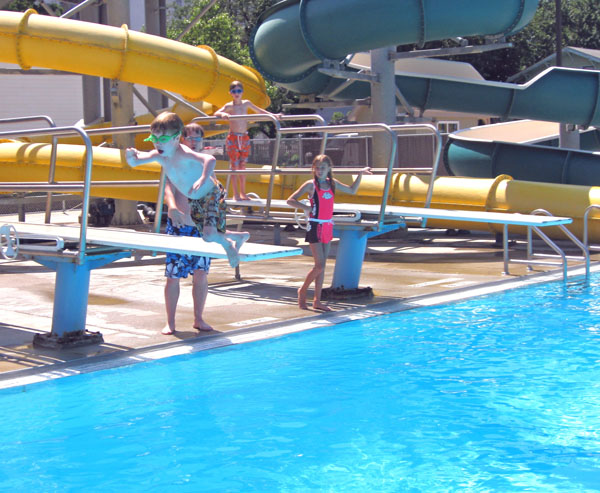 We finally were able to get Luke to jump off the diving board.  The only problem is he wouldn’t jump off the end.  Instead, he preferred to jump off the side so he could quickly swim to the ladder and get out of the deep end.  He did this three or four times until the lifeguard came over and told him to knock it off. 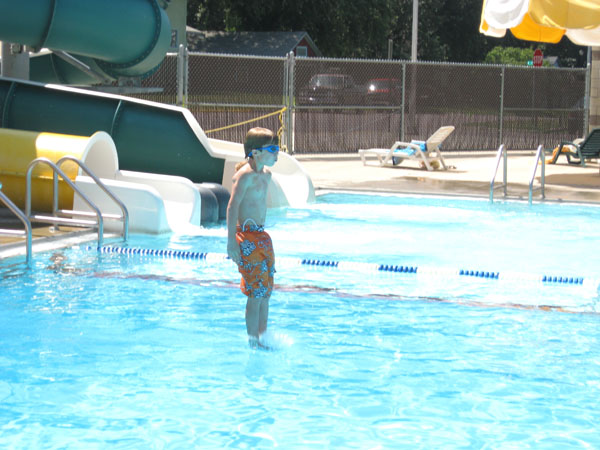 Avery amazed everyone with his brand new “Standing on Top of the Water” trick. 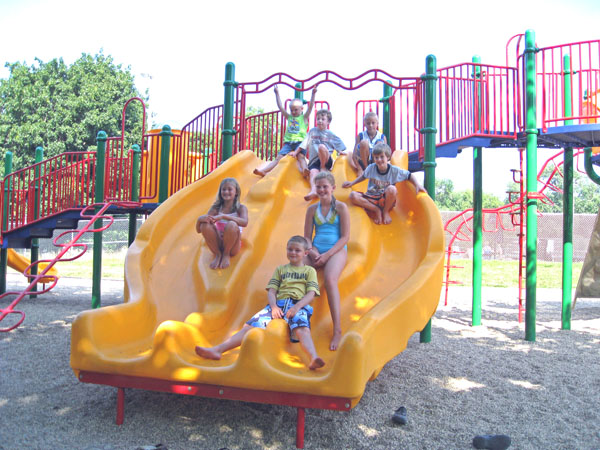 Getting all the kids to go down the slide at the same time was quite a feat.  Although it was quite neat to see them all slide down the steep orange slide in unison, the bloody pile-up at the bottom afterwards just wasn’t something any of us had anticipated.

Click Here For More Pictures from the Timmerman Family Reunion 2008 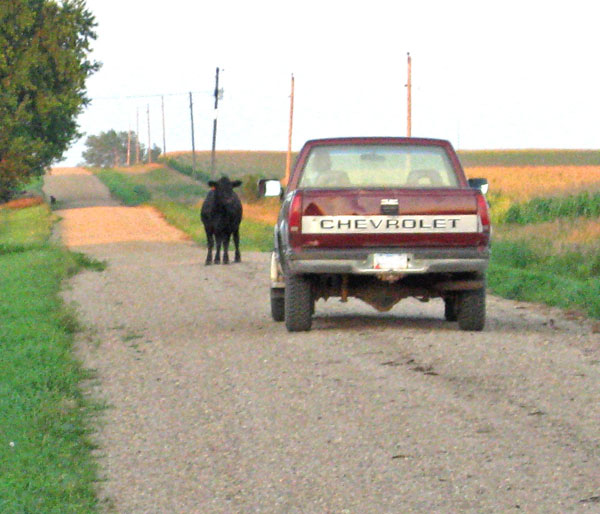 After the reunion was over, we had a bit of excitement back at the farm when one of Uncle Jerry’s cows got loose.  Before Grandpa Larry arrived, I tried to sneak up on the runaway to get some pictures.  Then Miss Sheri yelled at me not to get too close because the beast could stomp me into the earth or even worse, I could scare him so he’d run farther away and they wouldn’t be able to recover him.  Them dang cows are expensive! 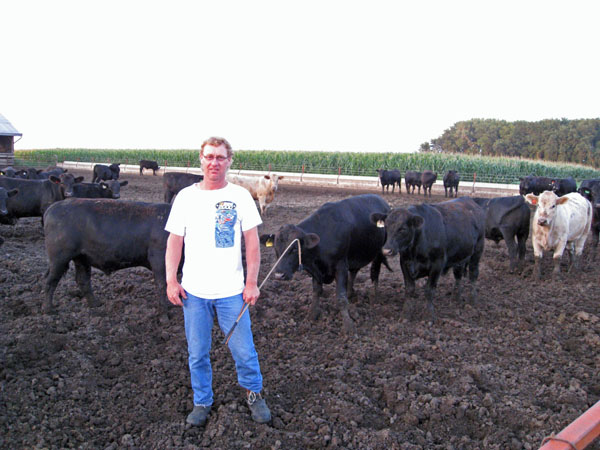 Eventually Grandpa Larry used his truck and was able to coax the cow to rejoin his pals in the yard.  Uncle Jerry then decided to teach the runaway a lesson by going over and beating him with his stick.  just kidding.  Uncle Jerry would never do anything to intentionally hurt one of these creatures.  Mainly because them dang cows are expensive! 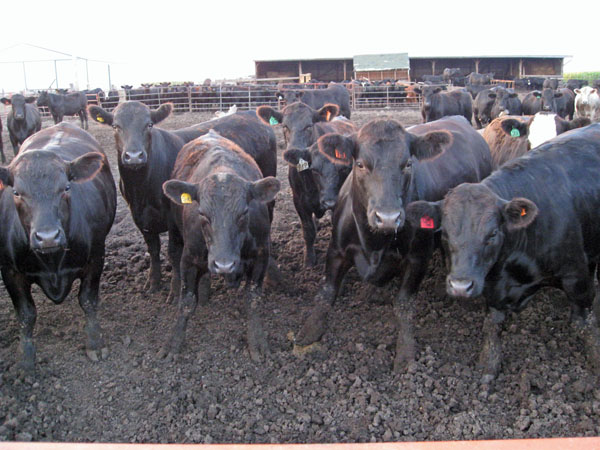 I can’t say I’ve ever really thought of a cow as a scary animal before, but when I started climbing the fence to go in and see them they all came up and looked at me with these expressions on their faces.  So I decided not to mess with them. 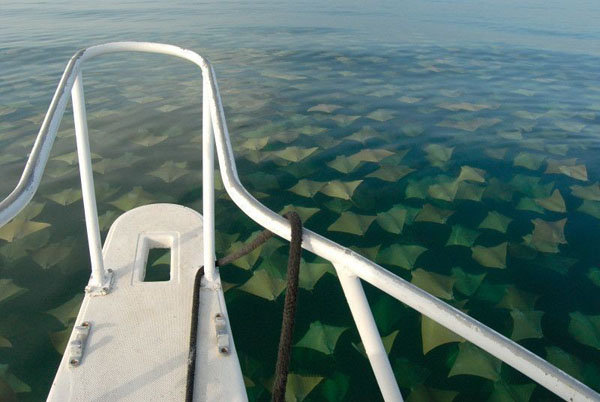 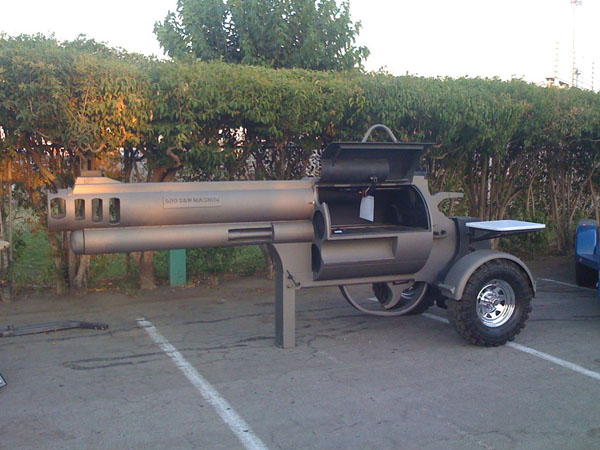 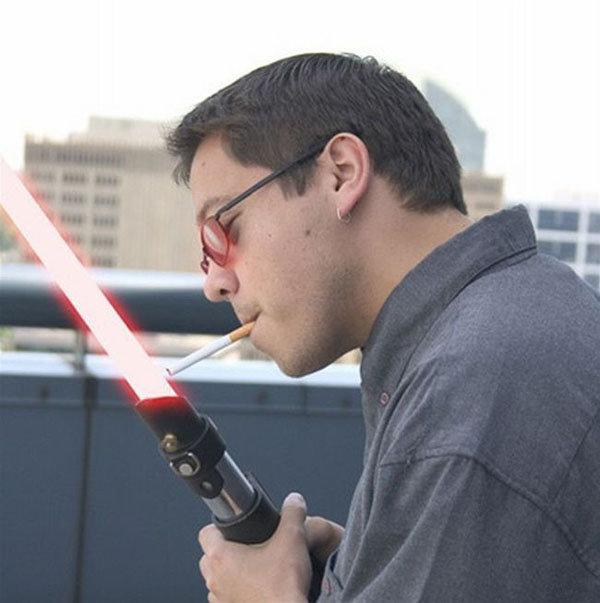 Mom will be so happy! 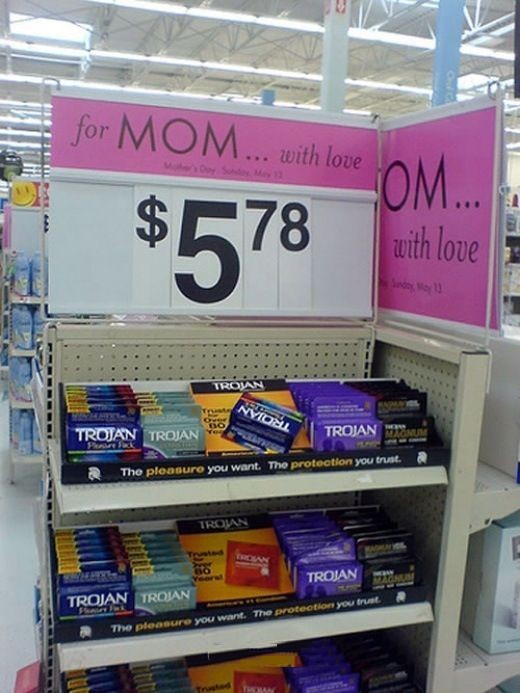 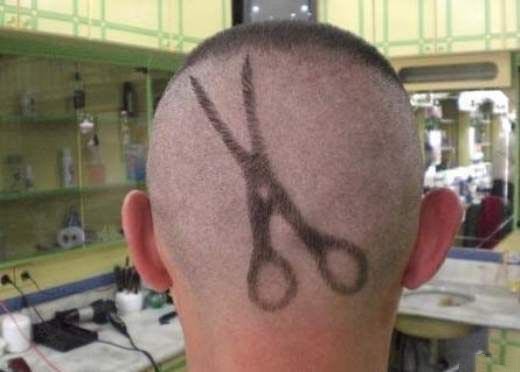 So that’s the difference… 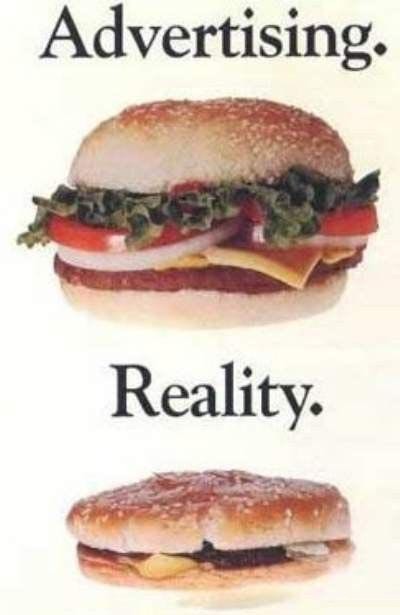 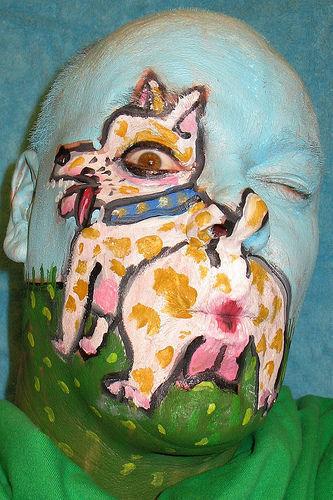 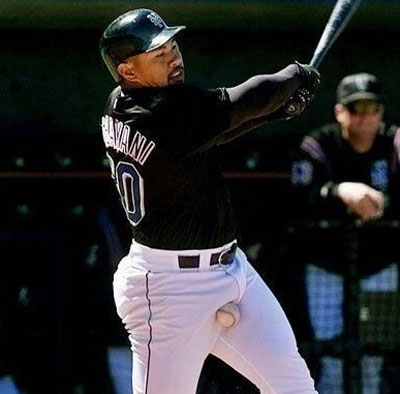 Now this is getting a little ridiculous! 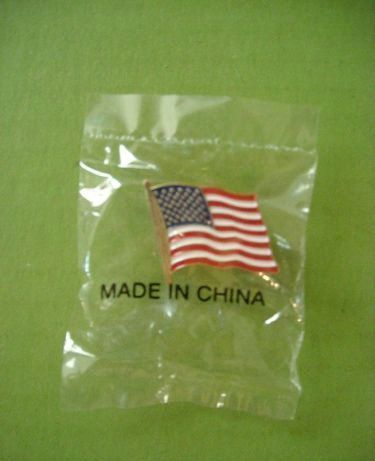 The credit crisis has brought us to this! 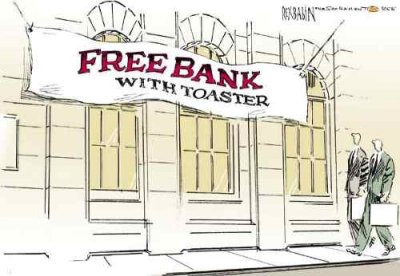 Live your life in such a way that when your feet hit the floor in the morning,
Satan shudders and says…”Oh shit …he’s awake!!!

Out of curiosity, I did.

A Mexican showed up with a lawnmower

Howard is 95 and lives in a senior citizen home. Every night after dinner, Howard goes to a secluded garden behind the center to sit and ponder his accomplishments and long life.

One evening, Annabel, age 87, wanders into the garden. They begin to chat, and before they know it, several hours have passed. After a short lull in their conversation, Howard turns to Annabel and asks, ‘Do you know what I miss most of all?

Annabel exclaims, ‘Why you old fart, you couldn’t get it up if I held a gun to your head!’

‘I know,’ Howard says, ‘but it would be nice if a woman just held it for a while.’

‘Well, I can oblige’, says Annabel, who gently unzips his trousers, removes his manhood and proceeds to hold it.

Afterward, they agree to meet secretly each night in the garden where they would sit and talk and Annabel would hold Howard’s manhood. Then, one night, Howard didn’t show up at their usual meeting place.

Alarmed, Annabel decided to find Howard and make sure that he was O.K. She walked around the senior citizen home where she found him sitting by the pool with another female resident-who was holding Howard’s manhood!

Furious, Annabel yelled, ‘You two-timing creep! What does she have that I don’t have?!’

Something really amazing happened in Downtown Spokane this week.

Joel is a loan officer at Sterling Bank. He works downtown in a second story office building, overlooking busy Riverside Avenue . Several weeks ago he watched a mother duck choose the cement awning outside his window as the uncanny place to build a nest above the sidewalk.

The mallard laid nine eggs in a nest in the corner of the planter that is perched over 10 feet in the air. She dutifully kept the eggs warm for weeks and Monday afternoon all of her nine ducklings hatched. 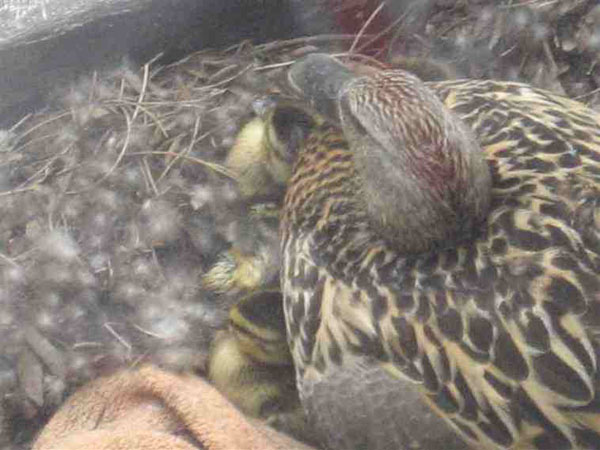 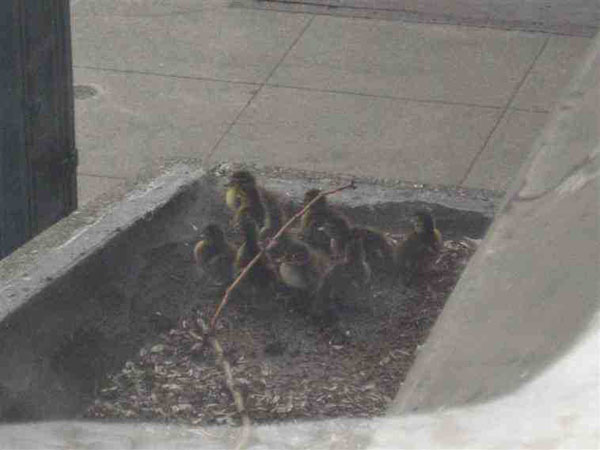 Joel worried all night how the mamma duck was going to get those babies safely off their perch in a busy, downtown, urban environment to take to water, which typically happens in the first 48 hours of a duck hatching. Tuesday morning, Joel came to work and watched the mother duck encourage her babies to the edge of the perch with the intent to show them how to jump off! 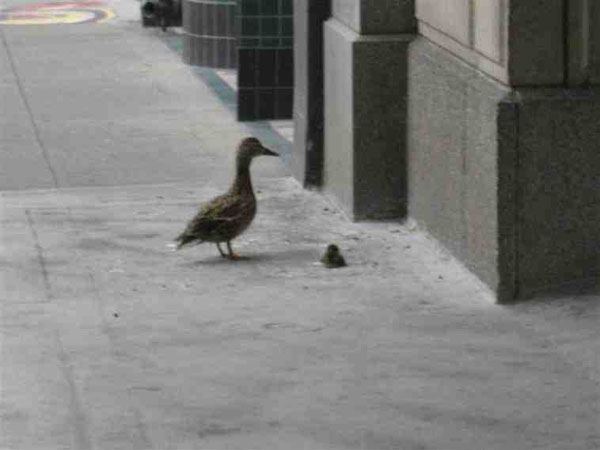 The mother flew down below and started quacking to her babies above. In his disbelief Joel watched as the first fuzzy newborn toddled to the edge and astonishingly leapt into thin air, crashing onto the cement below.

My brother couldn’t watch how this might play out. He dashed out of his office and ran down the stairs to the sidewalk where the first obedient duckling was stuporing near its mother from the near fatal fall. 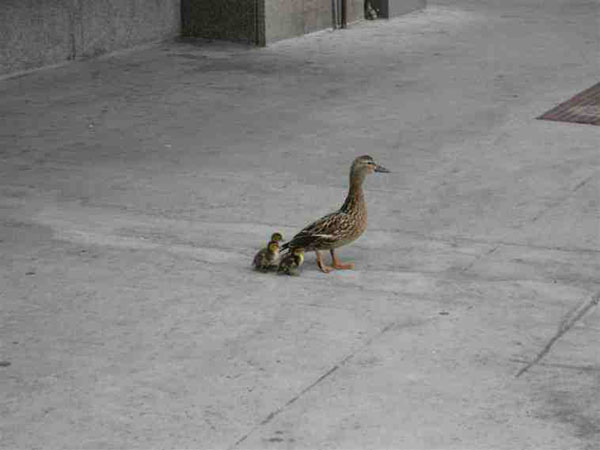 Joel looked up. The second duckling was getting ready to jump! He quickly dodged under the awning while the mother duck quacked at him and the babies above. As the second one took the plunge, Joel jumped forward and caught it with his bare hands before it hit the cement. Safe and sound, he set it by the mamma and the other stunned sibling, still recovering from its painful leap. 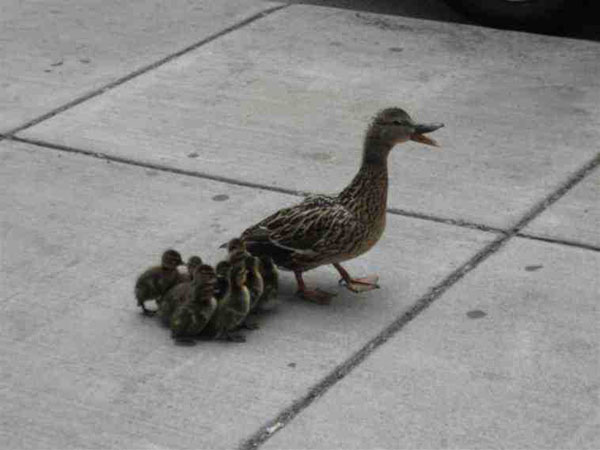 One by one the babies continued to jump to join their anxious family below. Each time Joel hid under the awning just to reach out in the nick of time as the duckling made its free fall. The downtown sidewalk came to a standstill. Time after time, Joel was able to catch the remaining 7 and set them by their approving mother. 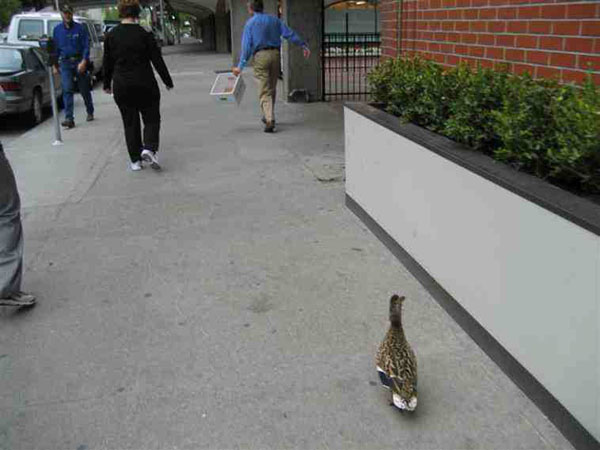 At this point Joel realized the duck family had only made part of its dangerous journey. They had 2 full blocks to walk across traffic, crosswalks, curbs, and pedestrians to get to the closest open water, the Spokane River.

The on looking office secretaries then joined in, and hurriedly brought an empty copy paper box to collect the babies. They carefully corralled them, with the mother’s approval, and loaded them up into the white cardboard container. Joel held the box low enough for the mom to see her brood.  He then slowly navigated through the downtown streets toward the Spokane River, as the mother waddled behind and kept her babies in sight. 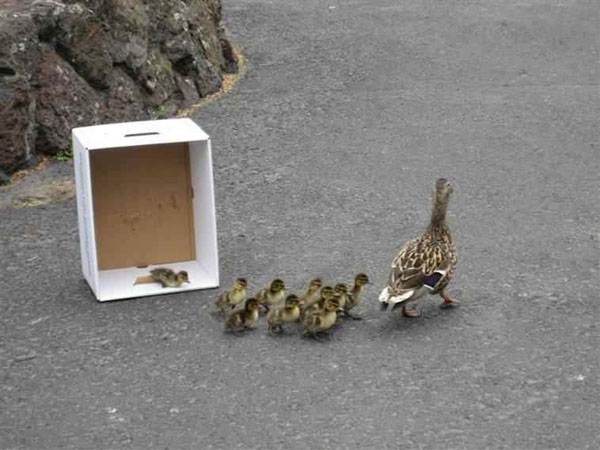 As they reached the river, the mother took over and passed him, jumping into the river and quacking loudly. At the water’s edge, the Sterling Bank office staff then tipped the box and helped shepherd the babies toward the water and to their mother after their adventurous ride. 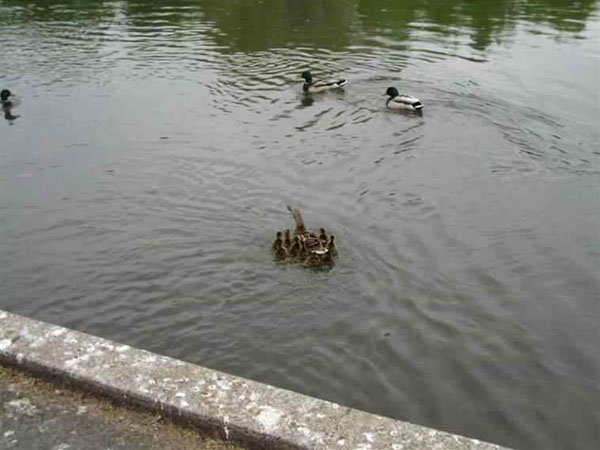 All nine darling ducklings safely made it into the water and paddled up snugly to mamma duck.  Joel said the mom swam in circles, looking back toward the beaming bank workers, and proudly quacking as if to say,

‘See, we did it! Thanks for all the help! 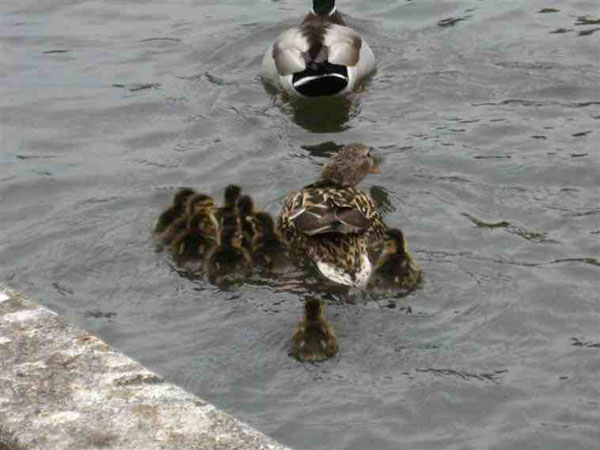 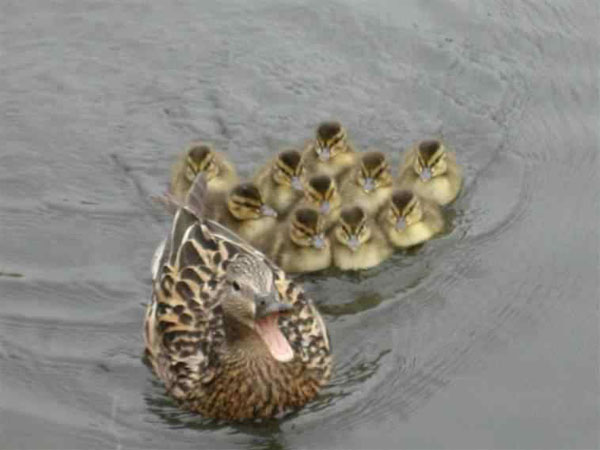 Thankfully, one of the secretaries had a digital camera and was able to capture most of it (except the actual mid-air catching) in the series of included photographs.

Please join me in celebrating Joel– The Downtown Duck Hero!