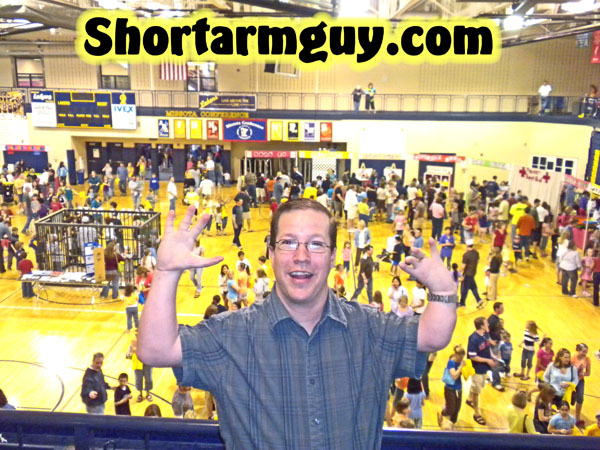 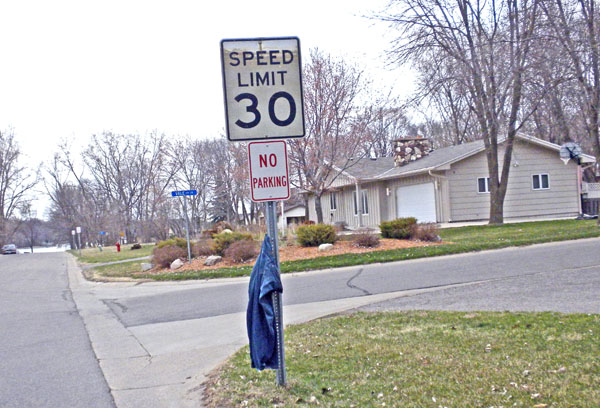 So we’re driving home the other day when we saw this oddity on our street.  I guess there’s no reason to buy a clothesline as long you have a no parking sign in your front yard! 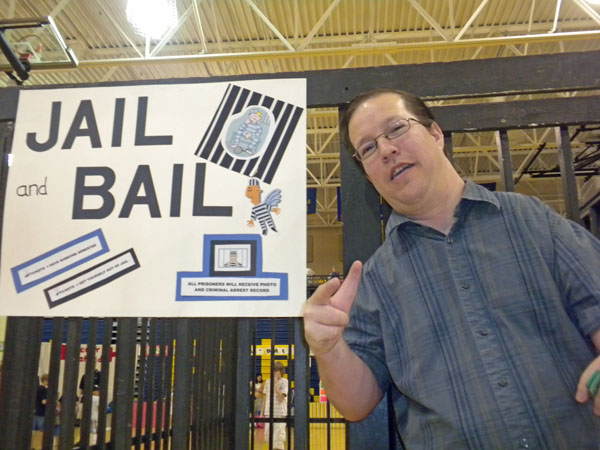 On Saturday, we went to the PTC Carnival at the Prior Lake High School which is billed as the Largest School Carnival in the state of Minnesota!  From 5 to 6 we helped the Cub Scouts by helping out with the big Jail and Bail attraction!  Normally, I do everything I can to avoid jail cells, but figured I’d make an exception since I was the one who got to lock the door! 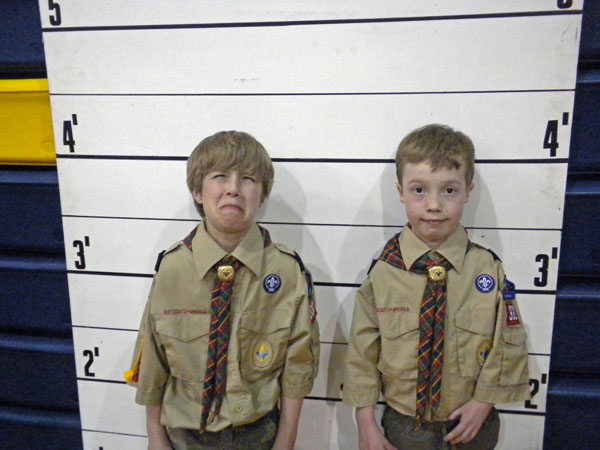 The concept is a very good one for a fundraiser.  Friends and family members hire the Cub Scouts for $4.00 to “arrest” people who think they deserve it.  The perpetrators then need to pay $2.00 to be bailed out of our cell.  It’s quite a great scam!  I think this was how Bernie Madoff got started… 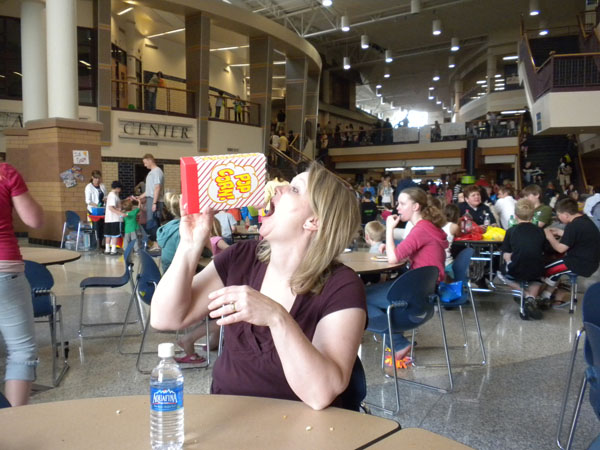 We thought Miss Sheri was going to help us with the booth, but once she discovered there was Popcorn at the carnival, we couldn’t drag her away. 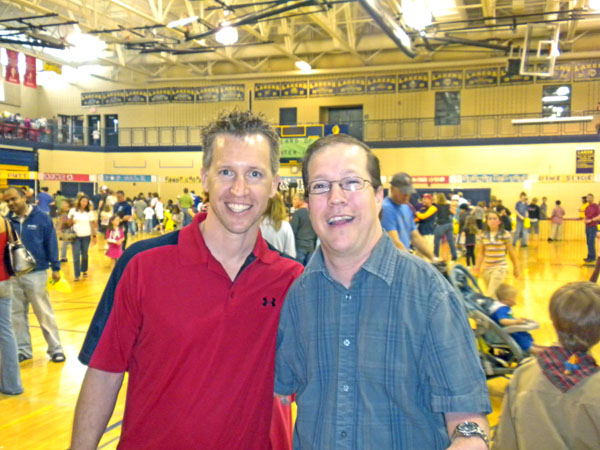 This is my good friend and Nor-Tech’s Seagate rep, John Bornholdt.  I bumped into John at the carnival and he was absolutely thrilled to be there.  He told me every year when the carnival arrives, his wife tells him he has to bring the kids because unfortunately she has other commitments scheduled at the same time.  Sounds like a pretty smart lady to me! 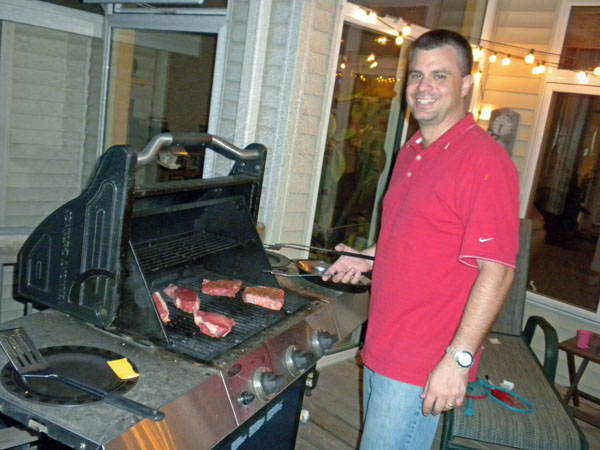 After the carnival, we were lucky enough to be invited to have dinner with our friends, Karl and Tina Zitzewitz.  Karl is a phenomenal chef and I love having the chance to dine on whatever fine cuisine he  prepares for us.  This is a guy that really knows how to handle his meat! 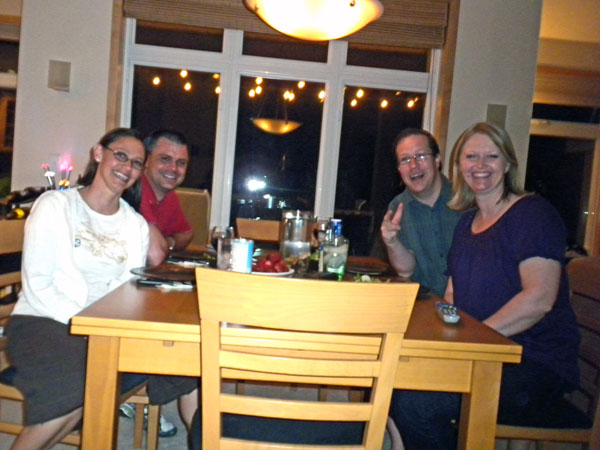 We had the kids eat first and then sent them off to play while the adults took their turn.  I realized shortly before we started to eat, that I needed a photograph of all of us before we could begin.  So I summoned Luke away from the TV to take this picture.  He was in a hurry to take the shot and get back to his show and just snapped a picture and ran off.  I later realized that although he did get a fine shot of the back of the chair, the people turned out just a little bit fuzzy.  The meal and dinner time conversation were great, though. 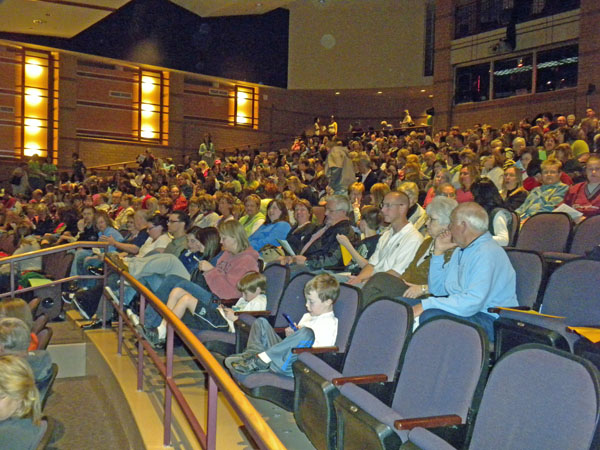 On Wednesday night, we had the opportunity to see a wonderful play called Autistic License.  It was at the Prior Lake High School and we showed up a half hour early because Miss Sheri thought it might be a little bit busy.  I’m glad we listened to her because this place ended up standing room only! 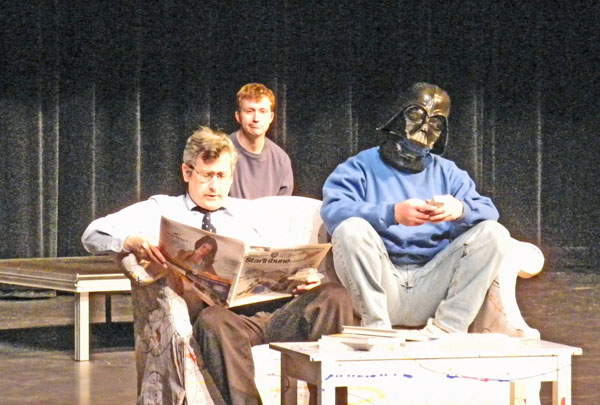 The play was incredibly powerful and inspiring.  It’s all about one family and the challenges they face coping with a child born with Autism.  When I first heard about it, my first thought was “Boring!”  but I’m really glad we went.  It was incredibly funny and thought provoking.  The St. Paul Pioneer Press described it as follows: “Autistic License is a docu-drama, a true-to-life play that takes audiences on the roller-coaster ride of raising a child with Autism.  It’s a sometimes exhausting, sometimes exhilarating, frequently terrifying trip that informs, enlightens, and entertains.”   I was especially impressed with Michael Paul Levin who was the father of the boy that inspired the play.  He played his son and was so funny and engaging, that you actually could believe that he was a small boy dealing with Autism.  If you get the chance to ever go see this play, I highly recommend it.

Greetings, I am an American Soldier Stationed in Iraq and first found your web site in 2004 during my first deployment. Your funny videos helped me through some times when what I really needed was a laugh. This evening i was on your site when I came across the dog video Sleep walking fail. Sadly this dog was not sleep walking ut having a canine seizure. I am familiar with this as I had a dog with Canine epilepsy. What appeared to be the dog running is what vets refer to as swimming or swimming out. The snapping sound is the dog gnashing his teeth together and the jumping against the wall was the violent climax of the episode. I am sure the people who sent it in didn’t know what it really was. I am sure you will do the right thing.

On a positive note keep doing what you do. Many Soldiers enjoy your site and get a lot of laughs from it. 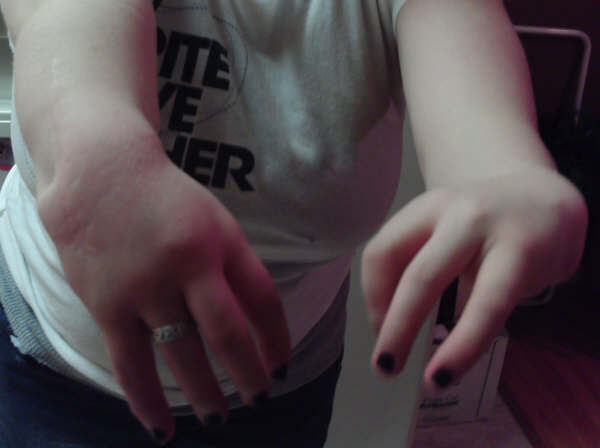 Hi, my name is Breanna. I’m 15-years-old and I’m a freshman in high school.  Sometime last summer, my sister took over my tv and made me watch Miami Ink.  The scene where you walked in the door and as soon as my sister saw your arms, she had said to me “He’s just like you, Bre.” If my sister hadn’t made me watch Miami Ink that day. I probably would have never heard of you. 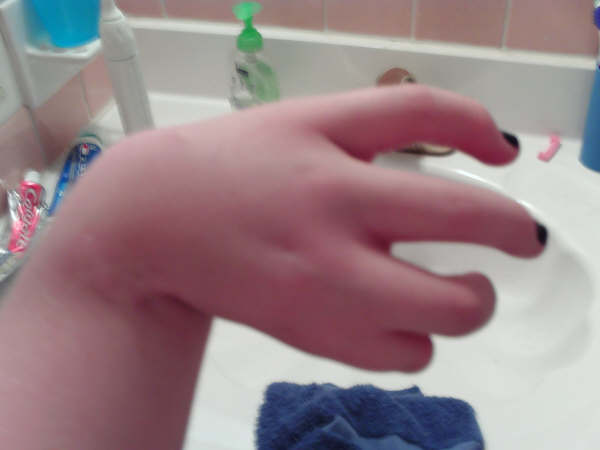 I felt sooo insecure about myself. Growing I felt normal until I reached the 8th grade.  I felt like people saw me as weird for not having thumbs, I felt like they saw as nothing but weird when I do things the average teenager would do….hangout with friends, going to school, having family time. My insecurity got sooooo intense I honestly thought people would even find me weird for even menstruating every month (sorry if that was too much information.) 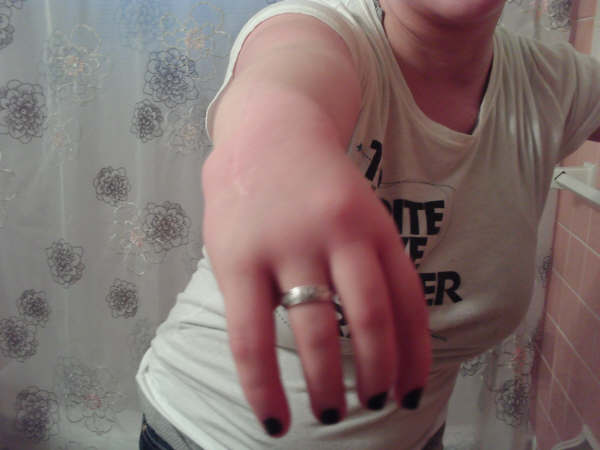 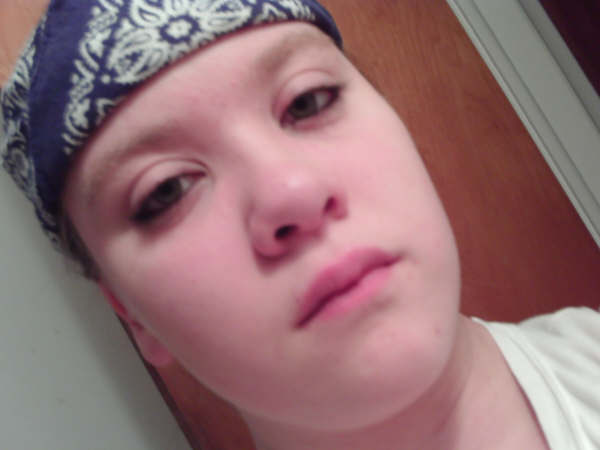 You have made me feel a lot better about myself, I can tell you that it feels a lot better knowing someone else that’s like me. Your my rock. Your an inspiration Todd Swank. Thank-You! 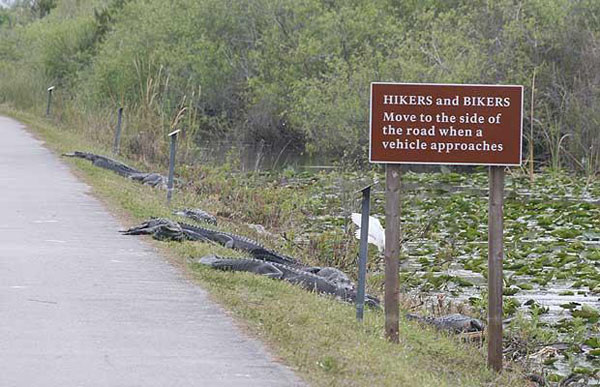 I gotta get me one of these! 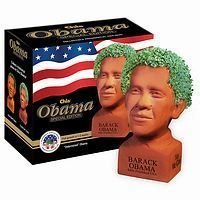 Why men aren’t allowed to pick out the wedding cake… 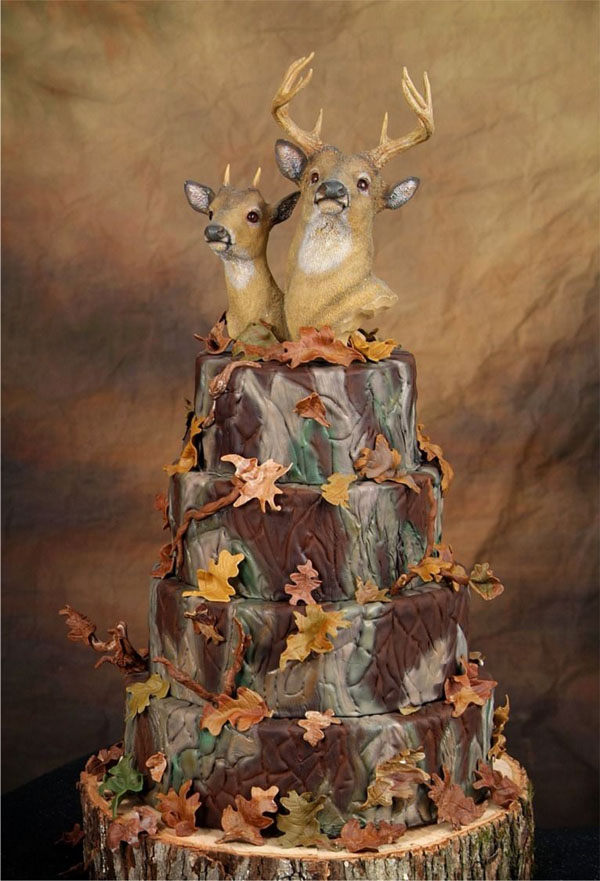 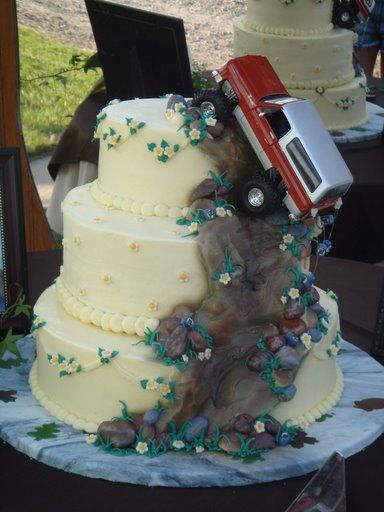 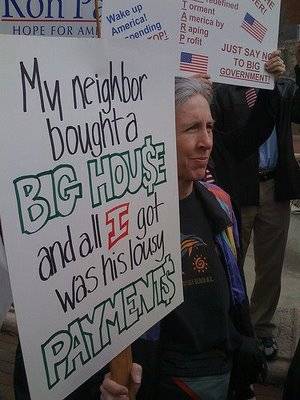 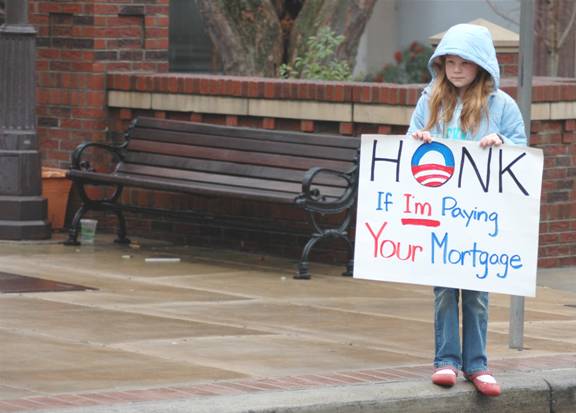 Story of my life…

Now roll them down the alley!

“First say to yourself what you would be; and then do what you have to do.”

A duck hunter was out enjoying a nice morning on the marsh when he decided to take a leak. He walked over to a tree and propped up his  gun. Just then a gust of wind blew, the gun fell over, and discharged…shooting him in the genitals.

Several hours later, lying in a hospital bed  he was approached by his doctor. ‘Well sir, I have some  good news and some bad news. The good news is that you are  going to be OK. The damage was local to your groin, there was very little internal damage, and we were able to remove all of the buckshot.’

‘The bad news is  that there was some pretty  extensive buckshot damage done to your penis. I’m going to have to refer you to my sister.’

‘Oh, well I guess that isn’t too bad,’ the hunter replied. ‘Is your sister a plastic surgeon?’

‘Not exactly.’ answered the doctor. ‘She’s a flute player in the local symphony and she’s going to teach you where to put your fingers so you don’t piss in your eye.

“Obviously, Windows commands a premium over a free operating system. The question is, how much is that premium, and where is that comfort level?” said Todd Swank, vice president of marketing at system builder Nor-Tech, Burnsville, Minn.

“Windows dominates Linux in terms of performance and usability right now, but it’s not like the Linux market is just going to sit still. And this becomes a much different argument when you start taking Google (NSDQ:GOOG) Android into the netbook equation,” Swank added.

A nurse on the pediatric ward, before listening to the little ones chests, would plug the stethoscope into their ears and let them listen to their own hearts.  Their eyes would always light up with awe, but she never got a response equal to four-year old David’s comment.

Gently she tucked the stethoscope into his ears and placed the disk over his heart. ‘Listen’, she said………..’What do you suppose that is?’ He drew his eyebrows together in a puzzled line and looked up as if lost in the mystery of the strange tap – tap – tapping deep in his chest. Then his face broke out in a wondrous grin and he asked, ‘Is that Jesus knocking?’

A little taste of the seafaring life on the Inland Seas

These photographs were taken in 2006
aboard Misener Transportation’s M.V. “Selkirk Settler “
as she crossed Lake Superior in typical November weather.

The first pic is in calm weather.. 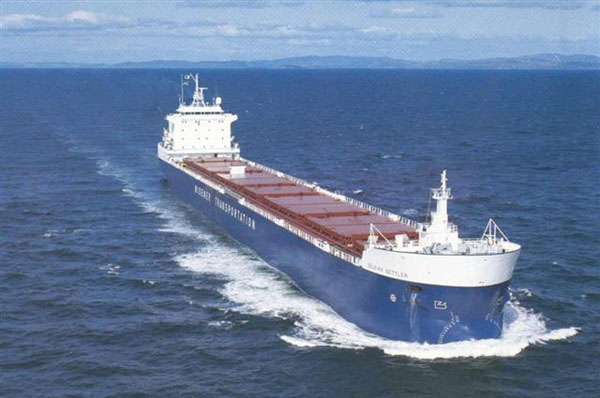 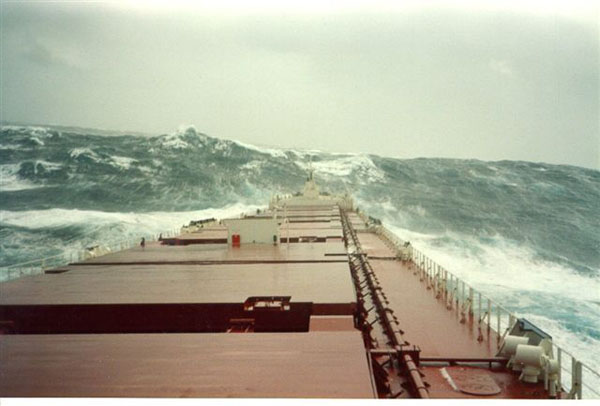 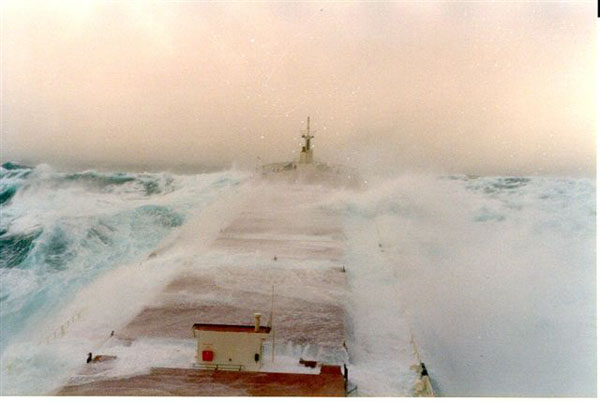 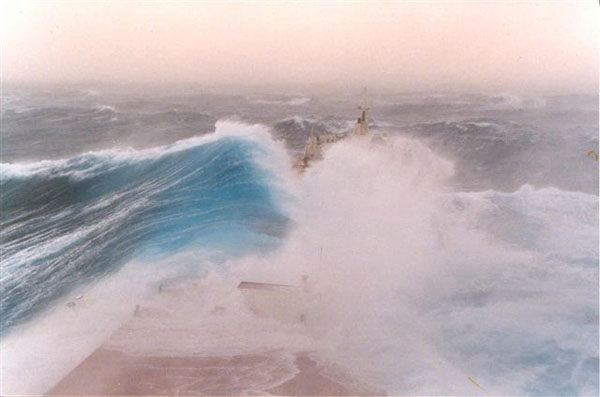 Still wonder why the ‘Edmund Fitzgerald’ didn’t make it..?