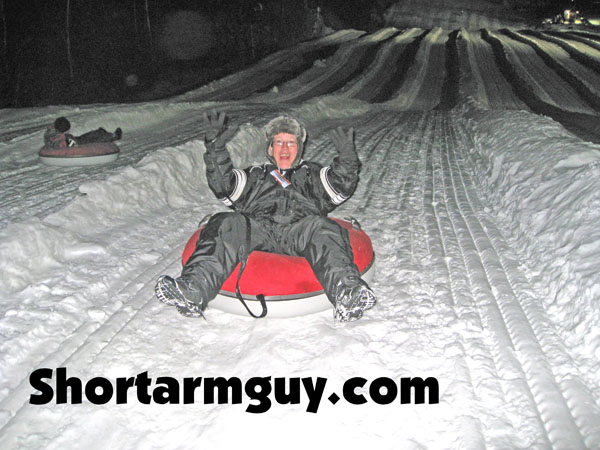 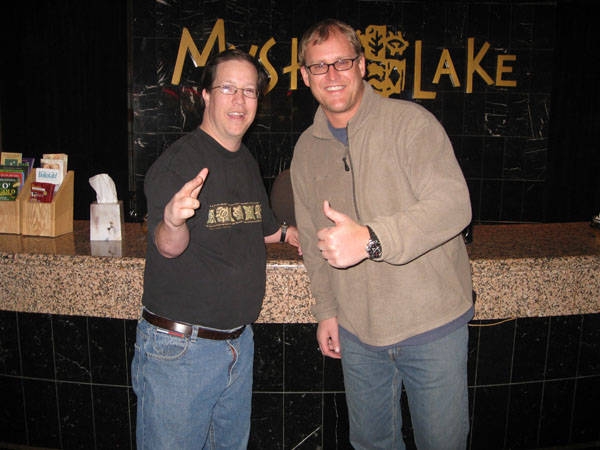 Krazy Kory stopped by on Sunday night.  He was in town for some training classes to help him with his new job as a hotel manager.  I told Kory I was going to start his training early and took him to Mystic Lakes Casino.  I figure I needed to teach him about gambling since apparently his new bosses have a great appreciation for it.  Because they sure are taking a huge gamble that Krazy Kory won’t somehow end up blowing up their hotel! 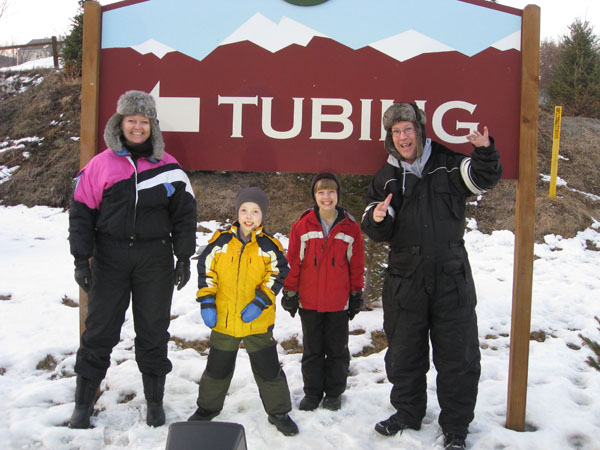 On Wednesday, the Shortarmguy Family joined the Pack 331 Cub Scouts for a wild night of tubing down Buck Hill! 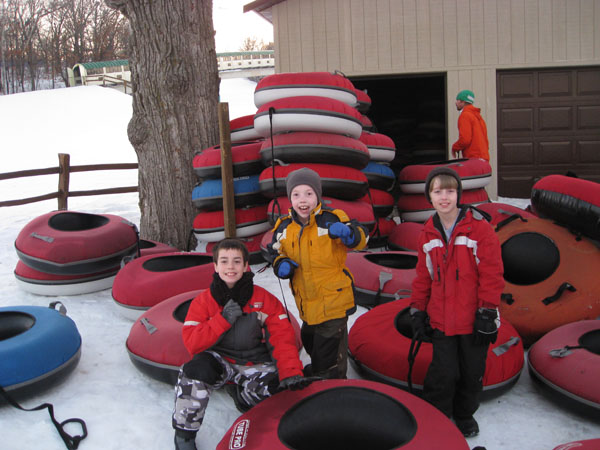 We were really excited to get there early because this meant we had our pick of any tubes we wanted!  The key is to find one that has a big donut hole in the middle. 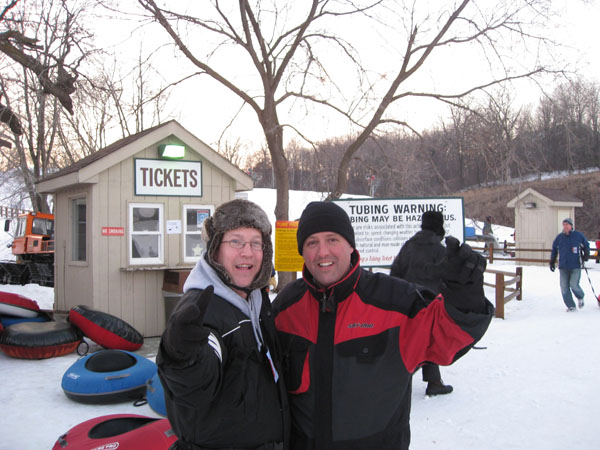 I was excited to connect with my old buddy, Jimi Gilbertson.  I was excited that is until I found out that he was just there to watch his boys and he wouldn’t be going down the hill on any tubes himself.  I was really hoping for the chance to race him.  Or ride on top of him. 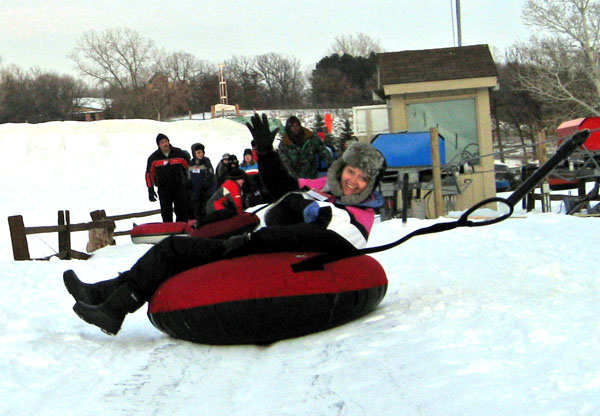 Miss Sheri was a trooper.  She’d been sick pretty much the whole week preceding the trip, but when it came time to bring the boys to the hill, she showed up with a smile.  At least she was smiling while being towed up the hill.  She mainly wore looks of terror while spinning down the ice covered slopes. 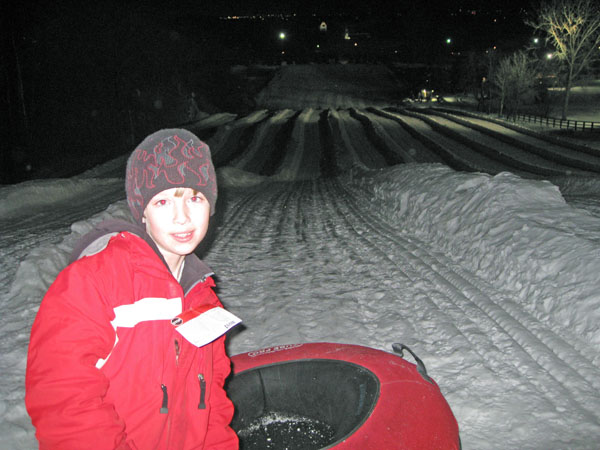 The weather was really nice, there was plenty of snow to give us a good ride, and the lines weren’t overly long allowing us to have plenty of trips down the hill.  All in all, it was a good dang night of tubing! 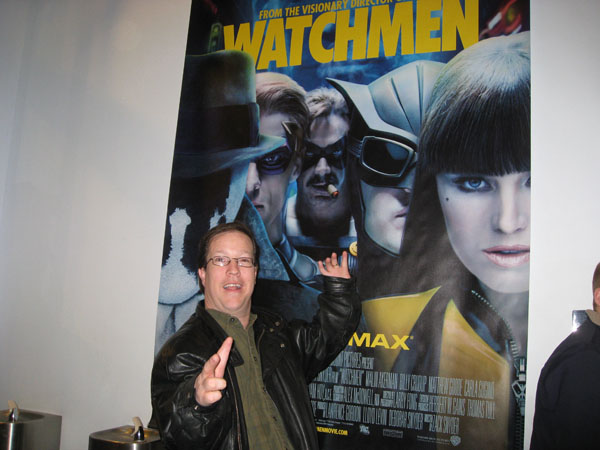 On Friday night, Miss Sheri and I dumped the boys off on Grandma so we could go see the new Popcorn Feature, Watchmen!  Miss Sheri thought it was a little too “Graphic” for her taste.  After all, the Big Blue guy walks around with his big old Schlong hanging out through most of the movie!  And there’s a lot of gratuitous violence.  But because I tend to enjoy these types of things in films, I’m going to give the movie One Big Thumb Up from Shortarmguy!  Go see it. 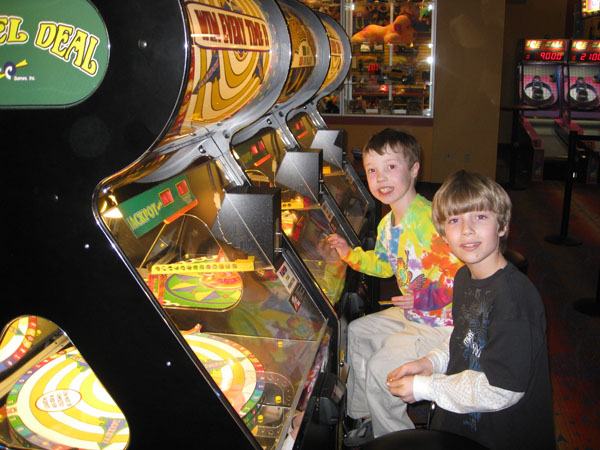 On Saturday afternoon, we took the boys to one of these new casinos for kids….otherwise known as the Arcade.  When I was a kid, the arcades had fun video games.  All you were trying to do was get a high score so you could enter your 3 initials for all to see.  Now arcades are nothing more than training grounds for the casinos.  Kids learn to shove in as much money as possible so they can earn tickets to buy cheap little junky prizes.  What a Rip Off!  Bring back PacMan I say! 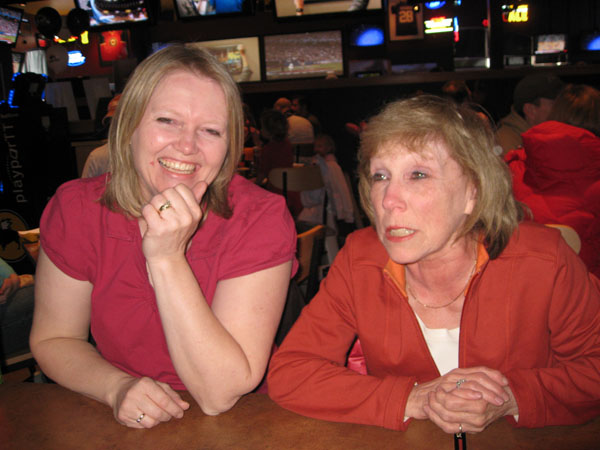 We also had the pleasure of having lunch with Grandma Linda at Buffalo Wild Wings.  When the waitress came to the table, Grandma just kept rubbing her hands while repeating over and over “Bring me my chicken.”   When the waitress asked her what kind of chicken, she’d just look off in the distance and make little grunting sounds before repeating her original statement “Bring me my chicken.”  Eventually, we told the waitress to just bring her a salad with some chicken on it.  That seemed to make her happy.

How to Win the Job Interview

How to Survive a Flash Flood 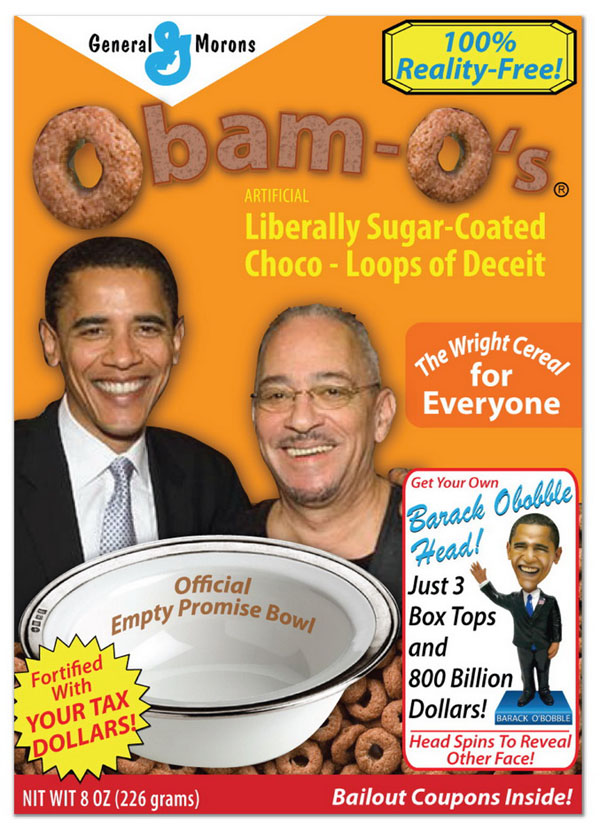 You there.  Help me move this couch. 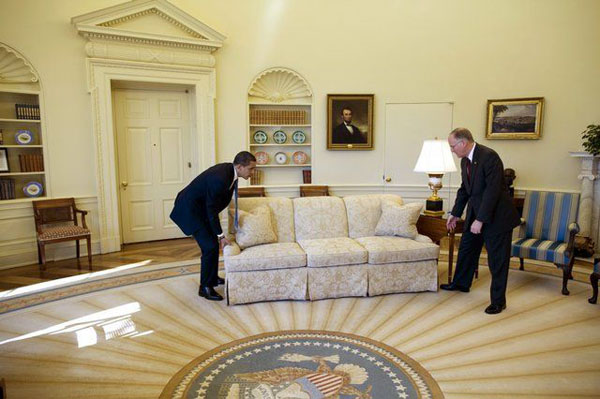 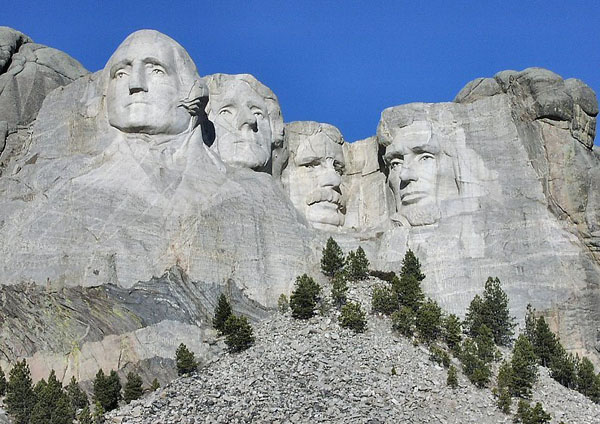 The Back of Mount Rushmore 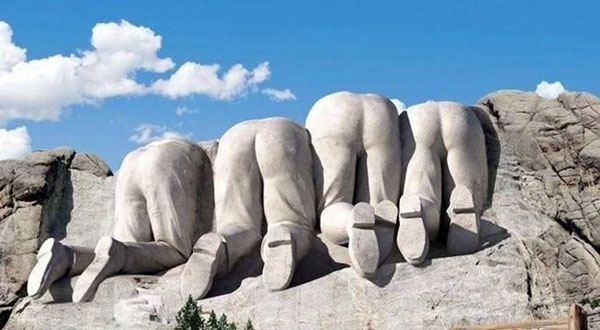 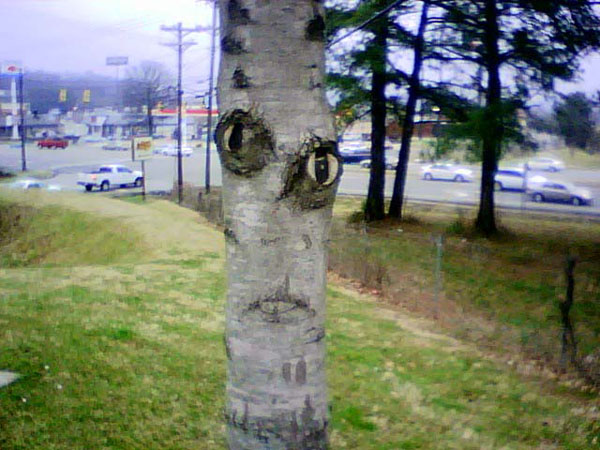 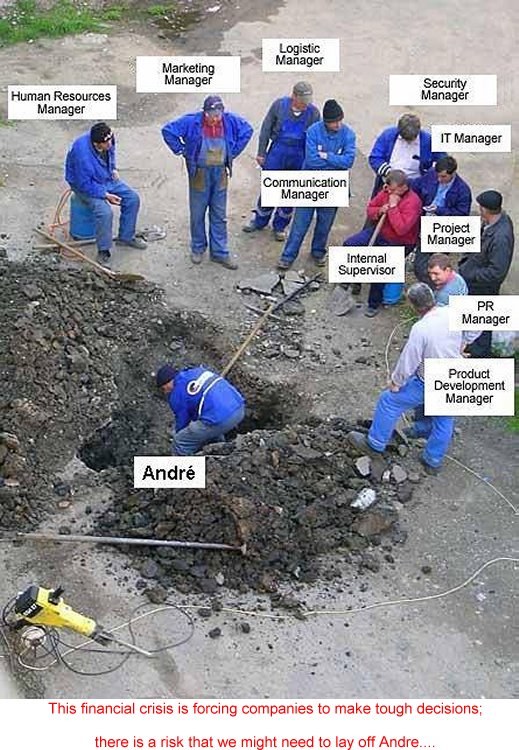 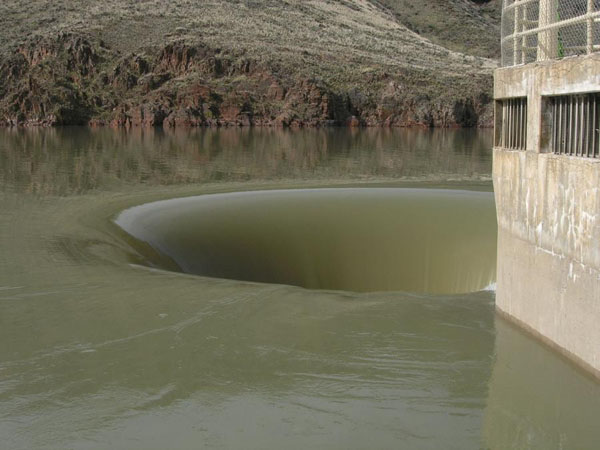 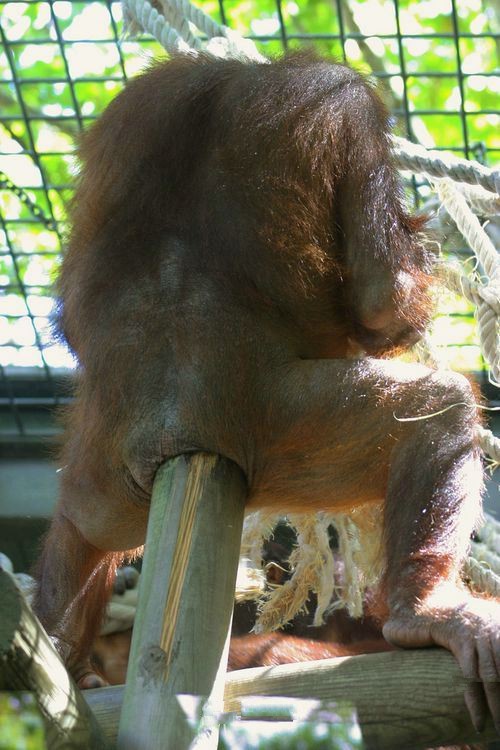 I thought Tom Cruise was Bigger 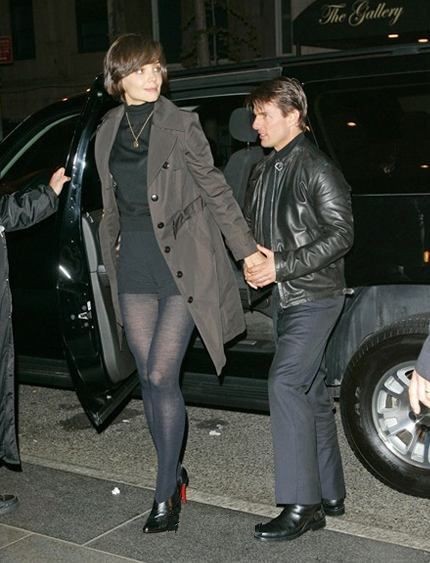 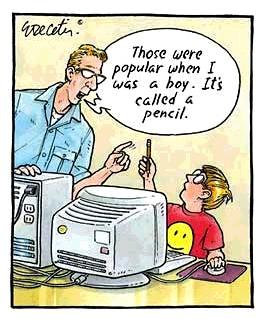 “In America, every day is a new beginning, and every sunset is merely the latest milestone on a voyage that never ends. For this is the land that has never become, but is always in the act of becoming.”

Don’t talk to my parrot

Gail’s dishwasher quit working so she called in a repairman. Since she had to go to work the next day, she told the repairman, ‘I’ll leave the key under the mat. Fix the dishwasher, leave the bill on the counter, and I’ll mail you a check. Oh, by the way don’t worry about my dog Spike. He won’t bother you.’

‘But, whatever you do, do NOT, under ANY circumstances, talk to my parrot!’

When the repairman arrived at Gails’s house the following day, he discovered the biggest, meanest looking dog he has ever seen. But, just as she had said, the dog just lay there on the carpet watching the repairman go about his work.

The parrot, however, drove him nuts the whole time with his incessant yelling, cursing and name calling.

Finally the repairman couldn’t contain himself any longer and yelled,

To which the parrot replied,

This is one of my more popular videos on Youtube.  It’s a video of the family and I at the Monster Truck Rally at the Minnesota State Fair and has been watched almost 200,000 times.

I received an email from MartinXY asking if he could borrow my video to test some new Fire Effects he had.  Naturally I said “Of Course” and this is what he came up with…..pretty cool!

The Half Million Dollar Shot

If you are 30 or older you will think this is hilarious!!!!

When I was a kid, adults used to bore me to tears with their tedious diatribes about how hard things were. When they were growing up; what with walking Twenty-five miles to school every morning….

And I remember promising myself that when I grew up, there was no way in hell I was going to lay a bunch of crap like that on kids about how hard I had it and how easy they’ve got it!

But now that I’m over the ripe old age of thirty, I can’t help but look around and notice the youth of today!

You’ve got it so easy! I mean, compared to my childhood, you live in a damn Utopia!

And I hate to say it but you kids today you don’t know how good you’ve got it!

I mean, when I was a kid we didn’t have The Internet.  If we wanted to know something, we had to go to the damn library and look it up ourselves, in the card catalogue!!

There was no email!! We had to actually write somebody a letter, —with a pen!

Then you had to walk all the way across the street and put it in the mailbox and it would take like a week to get there! Stamps were 10 cents!

Child Protective Services didn’t care if our parents beat us. As a matter of fact, the parents of all my friends also had permission to kick our ass!  Nowhere was safe!

There were no MP3s or Napsters! You wanted to steal music, you had to hitchhike to the damn record store and shoplift it yourself!

Or you had to wait around all day to tape it off the radio and the DJ would usually talk over the beginning and/or the end and @#*% it all up!

There were no CD players! We had tape decks in our car. We’d play our favorite tape and ‘eject’ it when finished and the tape would come undone.

’cause that’s how we rolled dog?

We didn’t have fancy crap like Call Waiting! If you were on the phone and
somebody else called they got a busy signal, that’s it!

And we didn’t have fancy Caller ID either!  When the phone rang, you had no idea who it was! It could be your school, your mom, your boss, your Bookie, your drug dealer, a collections agent, you just didn’t know!!! You had to pick it up and take your chances, mister!

We didn’t have any fancy Sony Playstation video games with high-resolution 3-D graphics! We had the Atari 2600! –With games like ‘Space Invaders’ and ‘asteroids.’  Your guy was a little square!  You actually had to use your imagination!! And there were no multiple levels or screens, it was just one screen forever!

You had to use a little book called a TV Guide to find out what was on! You were screwed when it came to channel surfing! You had to get off your ass and walk over to the TV to change the channel! There was no Cartoon Network either! You could only get cartoons on Saturday Morning. Do you hear what I’m saying!?! We had to wait ALL WEEK for cartoons, you spoiled little rat-bastards!

And we didn’t have microwaves, if we wanted to heat something up we had to use the stove … Imagine that!

That’s exactly what I’m talking about! You kids today have got it too easy.

You’re spoiled. You guys wouldn’t have lasted five minutes back in 1980 or before!

Regards,
The over 30 Crowd