We spent Christmas in Dallas. 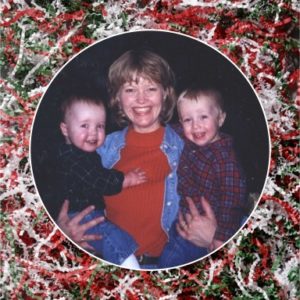 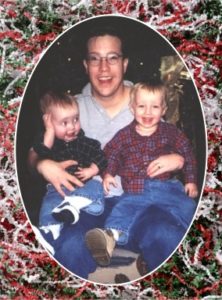 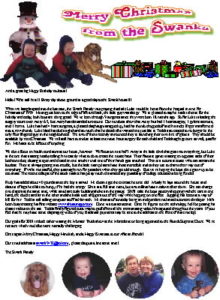 And a great big Happy Birthday to Jesus!

Hello! We’re still here!! Every day above ground is a good day at the Swank house!!!

When we last glimpsed into the bat cave, the Swank Family was praying that little Luke would be home from the hospital in time for Christmas of 1999. Having just been to the edge of life and back, the little guy was sleepy. We`re pleased to say he made it home for the holiday and today, both boys are doing great! We`ve been through 9 surgeries since they were born 18 months ago. So far Luke is leading the surgery count over Avery 6-3, but Avery has demanded a re-count. Our numbers show that Avery has had 1 heart surgery, 1 pyloric stenosis, and 1 hernia. Luke has had 4 heart surgeries, a plicated diaphragm strapped up, had his thumb chopped off and his index finger transformed into a new thumb. Luke liked his dad`s right hand so much that he decided he wanted one just like it. Todd is so excited to no longer be the only four fingered guy in the neighborhood. The two of them recently announced they`re launching their own line of gloves. They should be available by next Christmas. We will still have to endure at least one more heart surgery for each child and Todd might get one as well, just for fun. He hates to be left out of anything….

We don`t focus on health conditions at our house, however. We focus on mischief! Avery is the little devil that gets into everything, but Luke is the one that`s sitting nearby telling him exactly what to do to create the most chaos. Their favorite game is sitting on opposite sides of their bedroom door, closing it open and closed on one another until one of their hands gets smashed. Then it`s a contest to see who can scream the loudest. They`re always getting into trouble, but the little manipulators have these incredible smiles they use to charm their way out of everything. If we’re not careful, they just might run for president when they get old enough. But we`re hoping the boys don`t grow up to be too smart. The recent collapse of the stock market has pretty much eliminated any possibility of college educations being funded.

Rudy has added about 40 pounds since the boy`s arrival. He doesn`t get the exercise he once did. Mostly he lays around the house and dreams of legs he`d like to hump, if he had the energy. Sheri is a full time mom, but two infants haven`t slowed her down. She can change two diapers at the same time, while simultaneously building shelves in the garage. She’ll take the boys grocery shopping with the cart in one hand, the double stroller in the other and she kicks rude shoppers out of the way while hopping on one foot. Juggling has become a way of life for her. Todd is still selling computer stuff at Nor-tech. He dreams of someday being an independent multimedia content developer. He’s been busy creating his first website www.shortarmguy.com. Come visit us sometime. Once he figures out the technology, he’ll be posting his classic videos on the site. Todd’s finally figured out a way to profit from all the incriminating video he’s captured throughout the years. If you feel he may have some disparaging video of you, blackmail payments may be sent to the address on the front of this envelope.

Our goals for 2001 include either visiting the Monster Truck show at the Metrodome or being appointed to the Florida Supreme Court. We`re not sure which would be more mentally challenging.

Once again Merry Christmas, Happy Hanukah, and a Happy Kwanzaa to our African friends!

Our email address is shortarmguy@aol.com, please drop us a line some time!