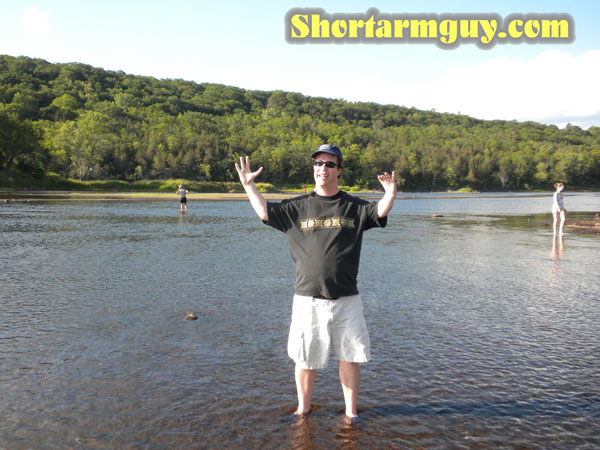 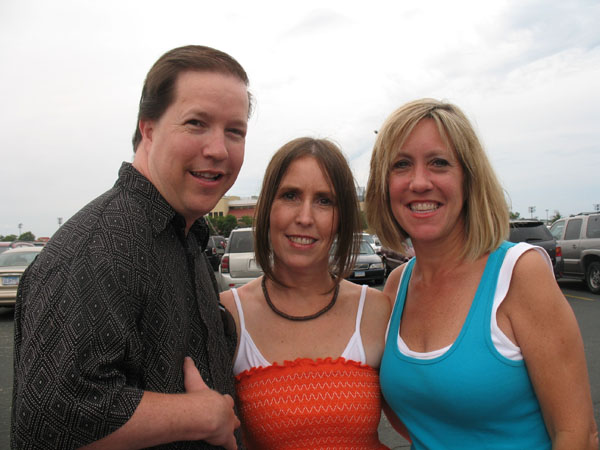 This week was still vacation time for the Shortarmguy Family and we spent it at home in Minnesota with my two sisters, Tracy and Tammy. We actually had a record breaking vacation this time around! Only one knockdown, drag out, blood drawing feud between the three of us and we ended up resolving it rather amicably! Usually we have four or five of those whenever we get together, so we’re really making progress as a family. 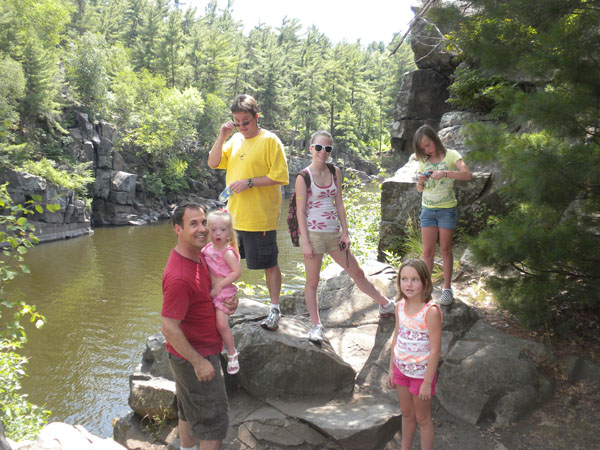 On Monday, we went to Taylor’s Falls, Minnesota to see the beautiful St. Croix River. I get really nervous about heights, so it’s super fun for me to bring the kids to a place where there’s hundred foot cliffs that aren’t guarded by any railings!! 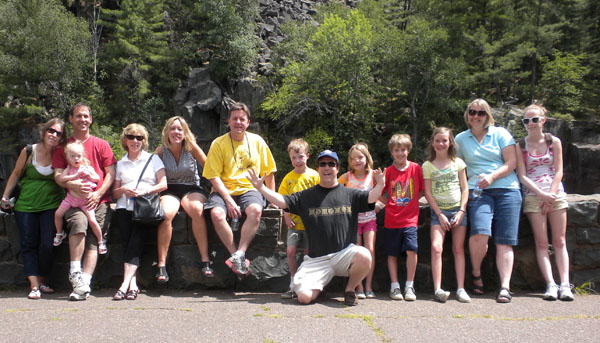 Believe it or not, there’s actually a beautiful view of the river flowing through some massive rock walls directly behind us in this picture. However, to get all that and 13 people in the same shot is nearly impossible, so here’s us. I suppose we could have done this shot in my backyard and had the same effect. 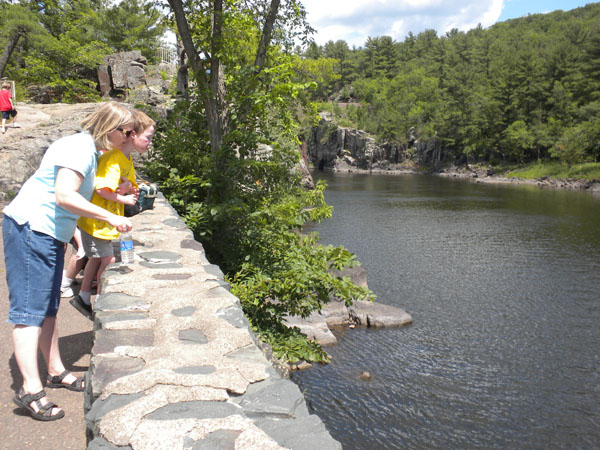 Shortly before this photo was taken, I was standing on this wall doing the Shortarmguy pose. Then a big step backwards….. Luckily, I landed on my head so I ended up being all right! 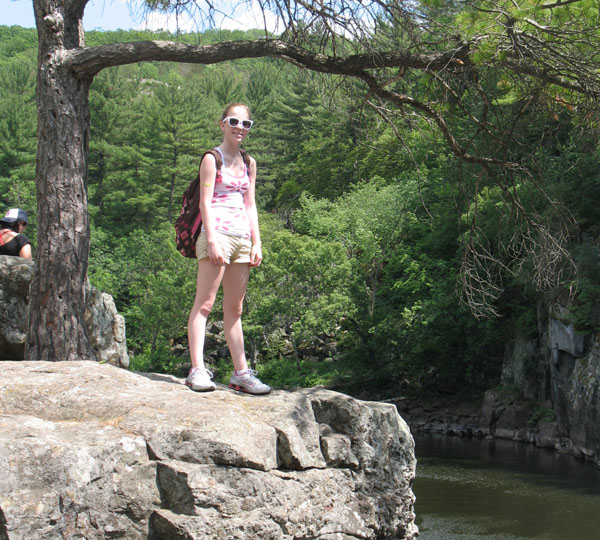 We actually took a picture of Bailey doing a cartwheel off the cliff right after this photo was taken, but we thought she looked cuter in this shot instead. 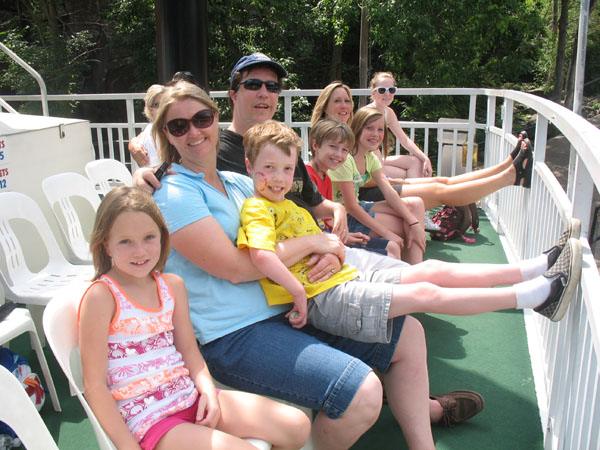 We took a boat ride down the river. Only Tracy and Luke were braced for impact when we rammed into that big rock wall. The rest of us flew forward and ended up with some pretty bad headaches. 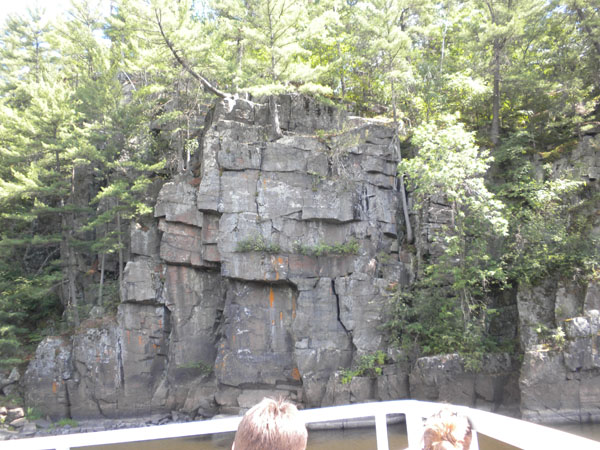 The tour guide said she thought this rock wall looked like George Washington as his head appears on the quarter. I guess I see it, but it looks like he’s choking on some grass to me! 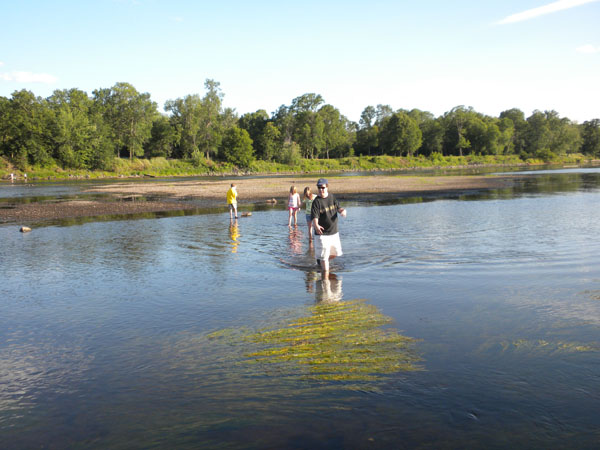 We were amazed with how shallow the St. Croix River was. We had a lot of fun walking across it until Grandma Linda fell into that big hole and sank to the bottom. She never was much of a swimmer. 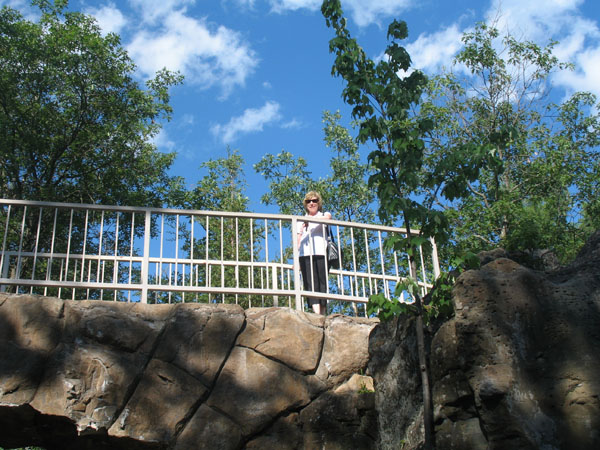 She preferred staying behind the railings after that happened. 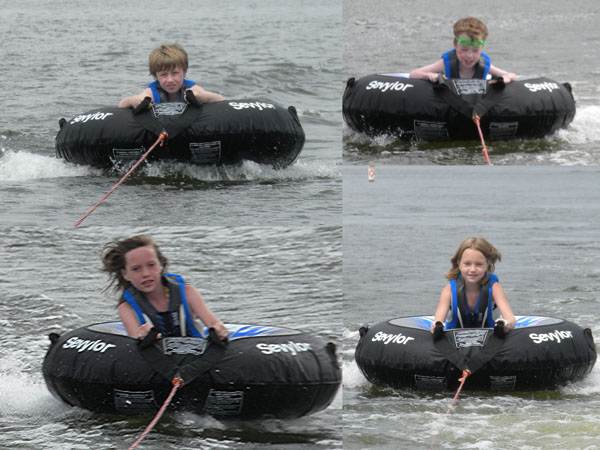 We finally became brave enough to attach a tube to the back of my boat and whip the kids around the lake. After completely submerging Avery to get started, I finally got the hang of it and the rest of the kids all had a great time! Avery did finally trust me to try again and I think he had fun, although he’d never admit it to me. 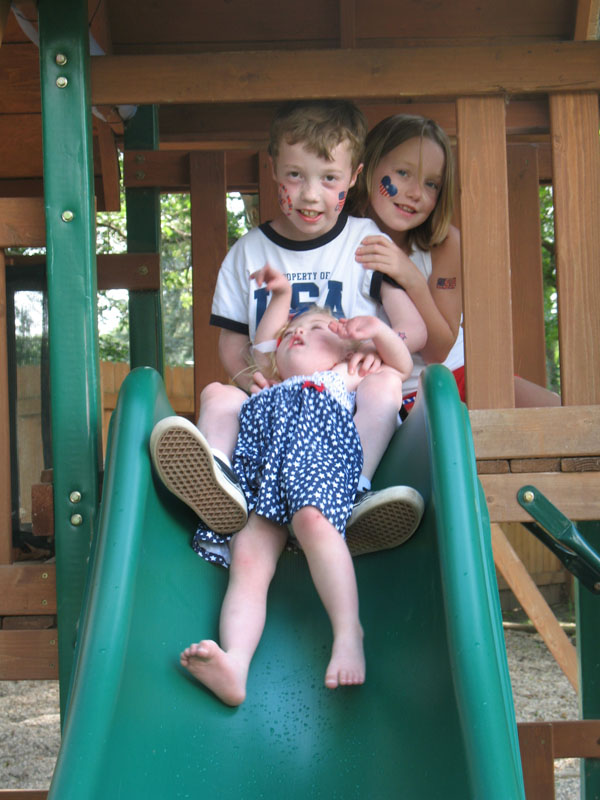 Lindsay likes going down the slide much more than she likes posing for pictures. 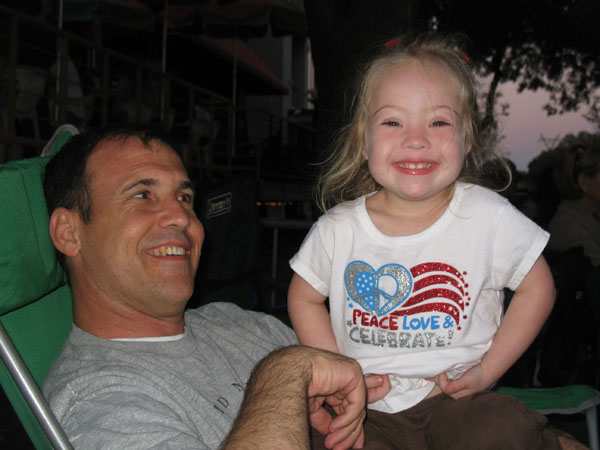 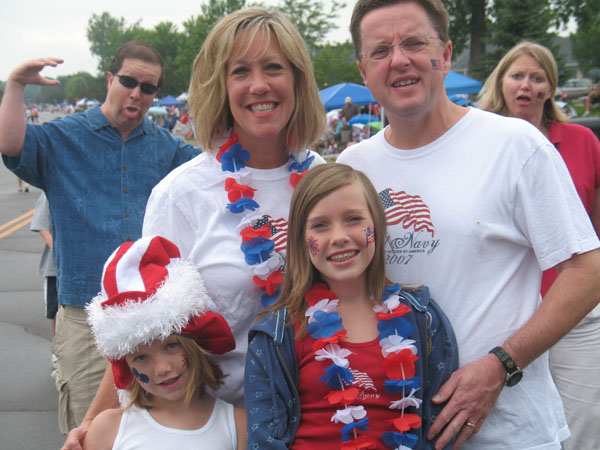 The Mohars love posing for pictures….and we love ruining them! 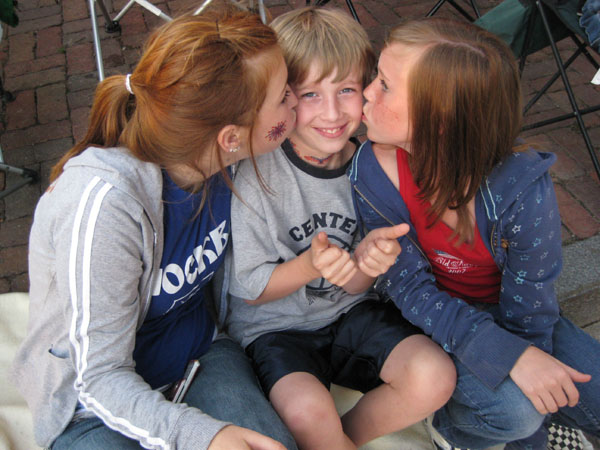 We keep telling Avery that it’s not acceptable to kiss his cousins, but for some reason it just keeps happening. I guess we’re just going to have to move to one of those states where this is legal. 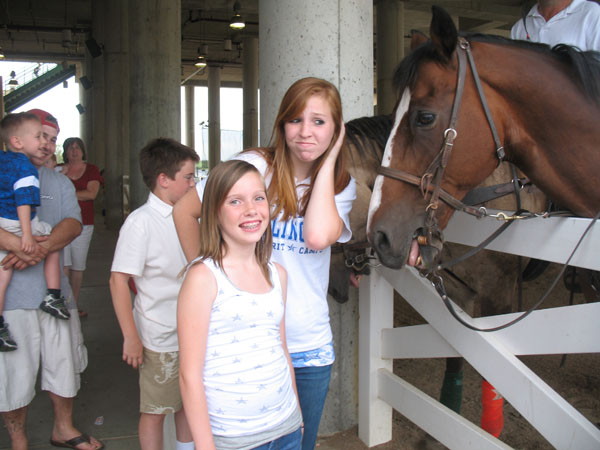 We were having such a wonderful time until that horse ate Mallory’s ear. 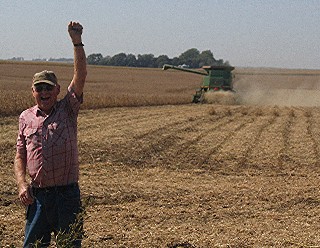 All wasn’t completely fine and dandy at the Shortarmguy household this week, though. Miss Sheri’s father, Grandpa Larry, had heart surgery this week and has been having a tough time recovering. As of this writing, he’s still on the ventilator and we’re hoping for him to re-gain his strength so he can come off of it as soon as possible. Any prayers you could send his way for a speedy recovery would be mighty appreciated!

hey, im from newzealand.
i was watching miami ink last night
your tat is the best, your soo my role model.
where are you from ?

my name is lisa i live i in denmark, thats in eruope
i saw miami ink today and i saw you in the program were you had the unik tato.
i was verey toutcht by the way that you told you’re storey.
you seem to be a verey happy and chaming person.

i wiches you and you’re famely the best of luck.

ps im sorry for the many mis-spelling’s

Hey, how are you? My names jacinta and I just thought id email you
because I saw you on miami ink one night, I have a close friend that has
underdeveloped arms and is really self concious about it so I sent him
the link to your site and it put a good few smiles on his face and im
hoping it will put a smile on your face knowing you can make others
happy =) well that’s all I have to write right now, best of luck with
everything

The Evian Babies
How to Close a Bag of Chips
Train Hit By Tornado Occurred in Illinois earlier this year — camera is on rear locomotive. Watch, especially to the left — watch the trees bend, debris in the air, and you can actually see the tornado pass from right to left. The trestles were moved out of alignment to the left 18 inches — the tank car was a load of Ethylene Oxide — nasty stuff. 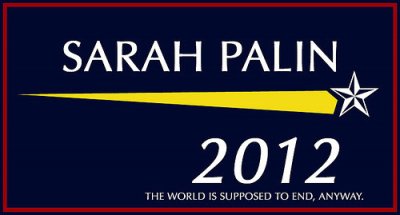 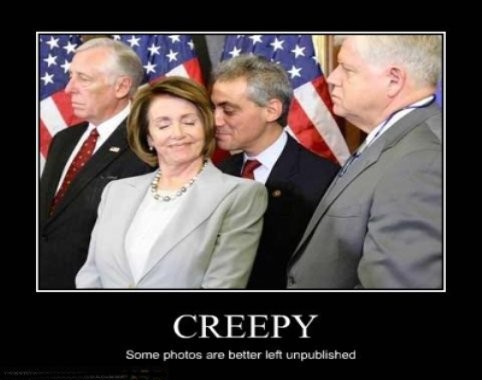 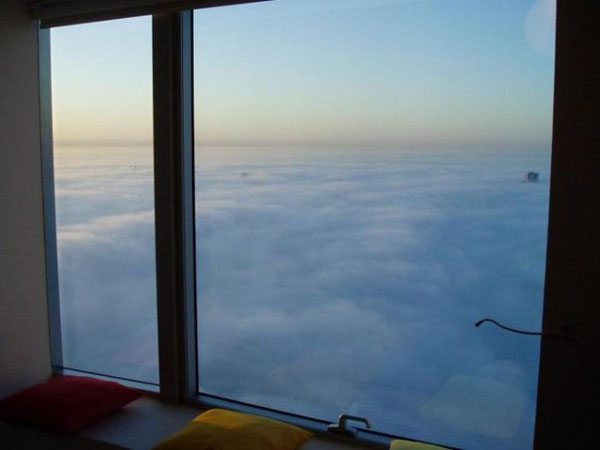 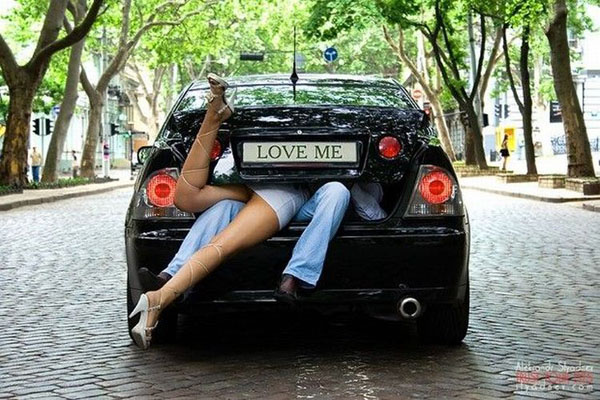 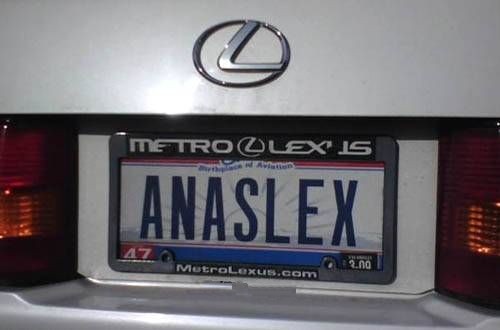 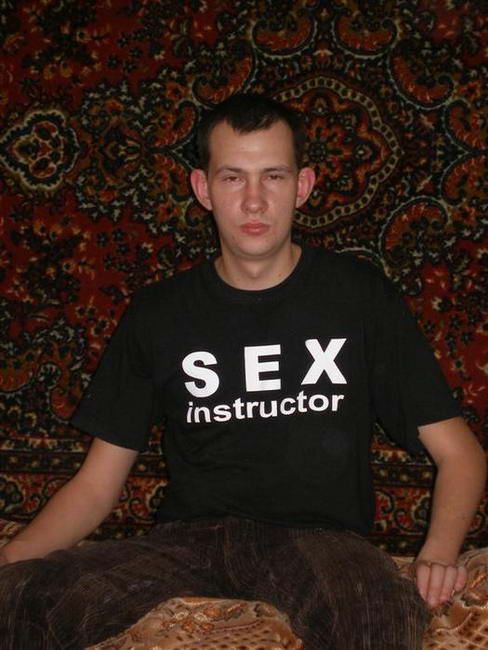 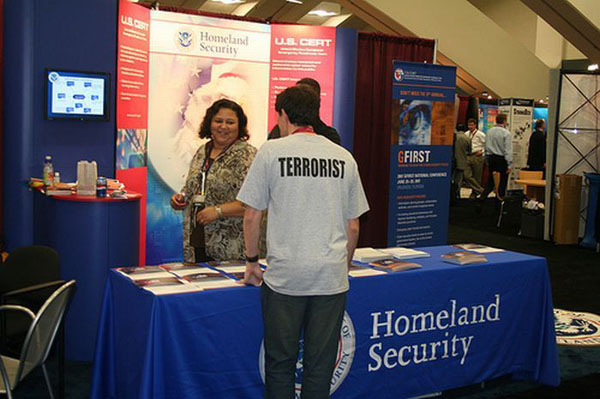 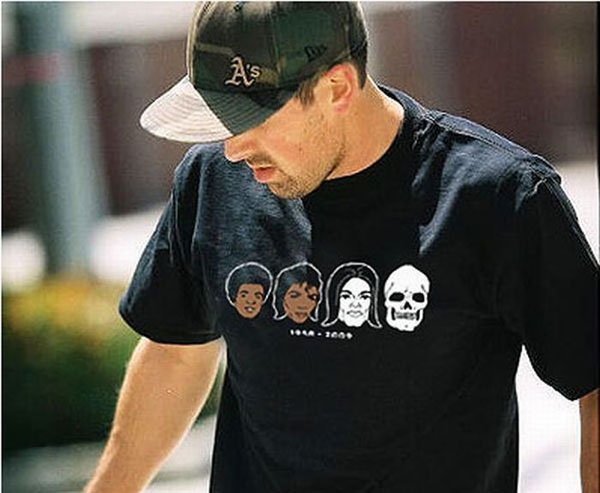 “Character cannot be developed in ease and quiet. Only through experience of trial and suffering can the soul be strengthened, ambition inspired and success achieved.”

AFTER BEING MARRIED FOR 44 YEARS, I TOOK A CAREFUL LOOK AT MY WIFE ONE DAY AND SAID, ‘HONEY, 44 YEARS AGO WE HAD A CHEAP APARTMENT, A CHEAP CAR, SLEPT ON A SOFA BED AND WATCHED A 10-INCH BLACK AND WHITE TV, BUT I GOT TO SLEEP EVERY NIGHT WITH A HOT 25-YEAR-OLD GAL.

MY WIFE IS A VERY REASONABLE WOMAN. SHE TOLD ME TO GO OUT AND FIND A HOT 25-YEAR-OLD GAL AND SHE WOULD MAKE SURE THAT I WOULD ONCE AGAIN BE LIVING IN A CHEAP APARTMENT, DRIVING A CHEAP CAR, SLEEPING ON A SOFA BED AND WATCHING A 10-INCH BLACK AND WHITE TV.

AREN’T OLDER WOMEN GREAT? THEY REALLY KNOW HOW TO SOLVE YOUR MID-LIFE CRISES.

You’re an 19 year old kid. You’re critically wounded, and dying in the jungle in the Ia Drang Valley , 11-14-1965, LZ X-ray, Vietnam . Your infantry unit is outnumbered 8 to1, and the enemy fire is so intense, from 100 or 200 yards away, that your own Infantry Commander has ordered the MediVac helicopters to stop coming in.

You’re lying there, listening to the enemy machine guns, and you know you’re not getting out. Your family is half way around the world and 12,000 miles away and you’ll never see them again. As the world starts to fade in and out, you know this is the day.

Then, over the machine gun noise, you faintly hear that sound of helicopter, and you look up to see an un-armed Huey, but it doesn’t seem real, because no Medi-Vac markings are on it.

Ed Freeman is coming for you. He’s not Medi-Vac, so it’s not his job, but he’s flying his Huey down into the machine gun fire, after the Medi-Vacs were ordered not to come.

And he drops it in, and sits there in the machine gun fire, as they load 2 or 3 of you on board.

Then he flies you up and out through the gunfire, to the doctors and nurses…

And, he kept coming back, 13 more times, and took about 30 of you and your buddies out, who would never have gotten out. 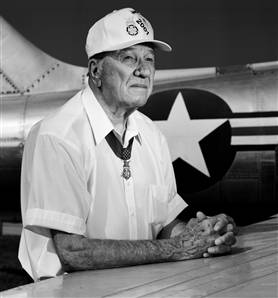 Medal of Honor Winner
Ed Freeman!
Since the Media didn’t give him the coverage he deserves send this to every red blooded American you know.
THANKS AGAIN ED FOR WHAT YOU DID FOR OUR COUNTRY.
RIP