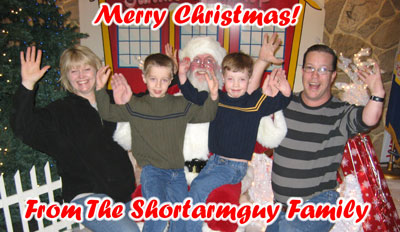 Merry Christmas!!  There!  We said it!!!  This year we were finally brave enough to say Merry Christmas in public again!  Surprisingly nobody punched us in the face.  Well, one guy punched Todd in the face but we’re pretty sure it was for a different reason and he had it coming to him.

So 2006 started for us like a kick in the groin.  In January, Todd’s stepfather, Denny, suddenly left the Earth after his heart decided it had done enough pumping.  It was an unexpected blow for all of us, but especially tough on Todd’s mom.  He was a great Husband and Grandpa and we really miss him.   Then in February, Todd’s father, Bob, discovered that he had leukemia.  Several scary rounds of chemotherapy were to follow including an especially harrowing battle that caused Todd to fly to Gulfport, Mississippi to visit him.  It was really a bizarre trip.  Not only was it stressful for Todd to watch his dad struggle with a very serious blood infection, but also witnessing the devastation that Katrina had wrought on the Gulf Coast was quite surreal. It really just felt like a bad dream.  Thankfully, Grandpa Bob is tough.  He was able to beat the cancer into remission.  Today, he and Grandma Joyce have moved to Branson, Missouri, quit smoking, and seem to be enjoying life more than ever!  But Luke and Avery have three grandfathers and Karma wasn’t going to let Sheri’s dad off easy after the beat down given on the other two.  Sheri’s father had been fighting some circulation problems in his feet, when he discovered that one of them had to be amputated.  The rumor is that he was so tough in his battle that he asked them to do it without anesthesia.  The doctors refused.  Today, Grandpa Larry is adjusting well to his new prosthesis  and didn’t even miss a single harvest.  And we pray to God that 2007 will be much easier on all of our fathers.

As for us, we pretty much suck.  Nothing really new to discuss.   The boys are healthy and doing great.  Luke did have to get another thumb surgery in August and wear a cast for a month.  The hand doctor moved a bunch of tendons around  in his hand intending to give him the ability to write better.  We don’t know why the doctor wanted him to be able to write  the word “Better” so badly…but he can do it now.  Avery had fun taunting Luke about all the things he could do that Luke couldn’t do while wearing his cast.  Avery also learned what it feels like to have a Plaster of Paris Arm Club whooped upside his head.  He didn’t like that much.  Other than that, it was a pretty quiet year on the medical front.  Thank God, again.

Luke and Avery are quickly growing up in front of our eyes and celebrated their seventh birthday this year!  Sheri sure does like to yell at those growing boys.  Todd pretends to agree with her discipline tactics but secretly says to them after she leaves the room “What’s her problem?”

Our Golden Retriever, Sunny, spent the year putting his tongue in inappropriate places, but he seems happy with his life.

We had a fun year of boating, baseball, a vacation to Texas, Cub Scout Camp, swimming, family trips, blah, blah, blah.  Nobody wants to hear about this boring stuff.  And if you do, visit Shortarmguy.com.  Every week, Todd writes about our life adventures.  The site had nearly 2 million page views in 2006 with more than 350,000 unique visitors!!

Our plans for 2007 are to build a new website like Youtube and sell it to Google for a couple of billion dollars.  We’re then going to spend  that money on lottery tickets.  With that many entries we’re bound to win the Powerball Jackpot finally!!

We hope all your dreams come true in the New Year!!!