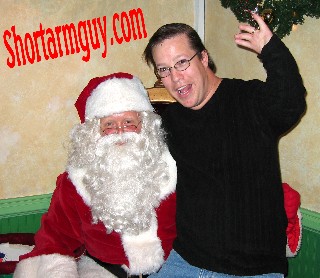 Merry Christmas!! Please do not show this letter to the authorities because we’re pretty sure it’s now illegal in the United States to actually wish people a Merry Christmas. And prison sucks.

Unfortunately, absolutely nothing exciting happened in our lives in 2005. We’re considering creating a reality TV series based on us called The Boring Family. But who would want to watch it?

We had a new bundle of joy enter our lives this year. Sunny is our Golden Retriever who joined our family in July. He’s given us a favorite question to ask each other. “Why did we want a dog again?” Sunny likes to wrestle hard with Luke and Avery and they’re always willing to scrap with him. The boys used to think it was so funny when Sunny climbed on their backs to get “piggy back rides”, but we took him to the vet to get that situation “fixed”. Our silly dog has also decided he really enjoys eating our favorite Christmas Tree Ornaments. He’s eaten about twelve in the past three weeks which makes his poop sparkly and shiny. It really gets us into the Christmas Spirit!

Luke and Avery discovered the joys of organized sports this year by playing baseball and soccer. Both boys had fun and were able to show off which side of the family they take after. Avery who seems more Haack than Swank, showed off his competitive juices by constantly pushing himself to lead his teams. Sadly for daddy, Avery already has the ability to hit a baseball farther than he can.

Luke, on the other hand, suffers from The Swank Factor. Although he really tries hard, sometimes he just gets distracted by more interesting things like bugs in the sand or jibber jabbering with his teammates. For example, in one soccer match, Luke made a decent play and the crowd cheered him on. Instead of staying with the game, Luke turned to the crowd, stuck out his tongue, and wiggled his butt at everyone. Which happens to be a patented Swank move. People laughed and that seemed to make him happier than if he had made a Goal. Luke and Avery will try basketball in January. Dad plans to participate by gambling on some of their games.

The boys started 1st grade this year, so Sheri changed jobs to fit their schedule. Now she’s working as a teacher’s assistant for ECFE in the Prior Lake School District. Lucky for us, they’ve never done a Background Check on her. If they only knew….

Todd still works at Nor-tech selling and marketing computers. Sometime he likes to mix it up by marketing and selling computers instead, but only when he’s feeling a little spicy. He’s also still obsessed trying to build a cult following for his website, Shortartmguy.com. The site has had a little over 87,000 visitors so far in 2005 and was even discussed on Seattle’s #1 ranked radio talk show. We have no idea what they said but we’re guessing the words “Weirdo” and “Freak” were used a couple of times.

Sheri had her first trip away from the boys this May when she accompanied Todd on a business trip to San Diego for a Microsoft Partner Conference. We were just starting to remember what it was like to be married without children when a hotel repairman walked into our room and interrupted our celebration. It made us feel like we were back home again.

We took the boat out quite a bit this summer and learned the joys of prop smashing. Avery loves to jump off the front of the boat and swim around in his life jacket while Luke is quite the fisherman.

Our goal for 2006 is to learn how to outsource our parental responsibilities to some loving mom and dad in China or India. Then we’re going back to that hotel in San Diego!

We hope 2006 is the year that you discover and fulfill your greatest dreams!!