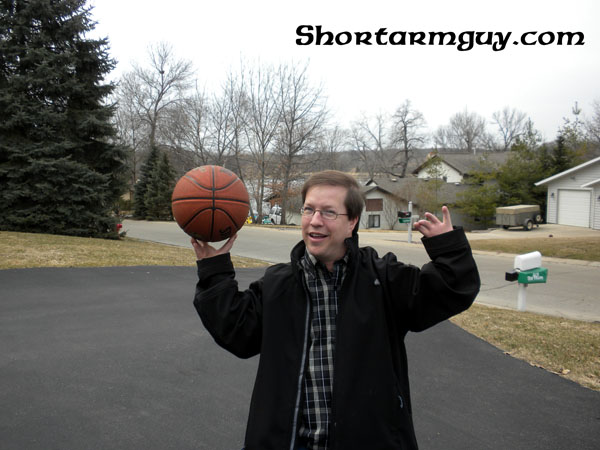 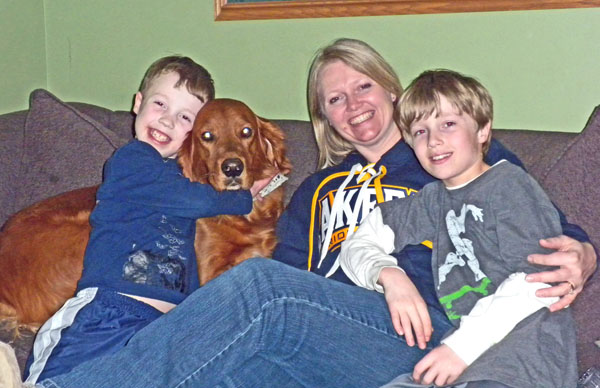 We had an extremely uneventful week at the Shortarmguy House.  As a matter of fact, much of it was spent with our butts firmly implanted on this couch watching great television like Lost, American Idol, and Friday Night Lights.  Normally, I’d be sitting there as well, but Sunny just won’t give me a spot any more. 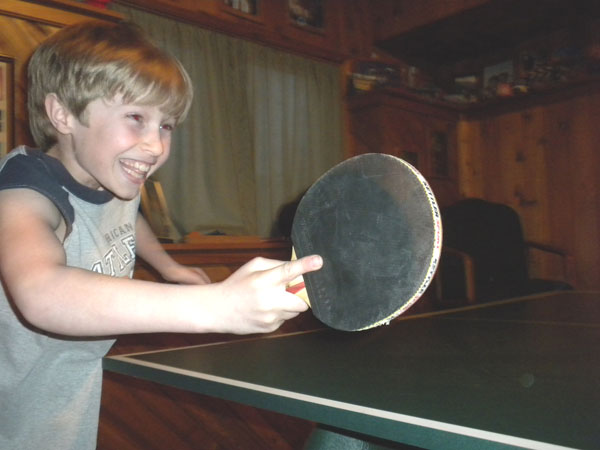 You know we’re not up too much when I have to resort to pictures of us playing Ping Pong and basketball to fill up my website update.  In this photo, you’ll see Avery get very excited just as the corner of the ping pong table is about to pierce through the fleshy covering of his ribcage. 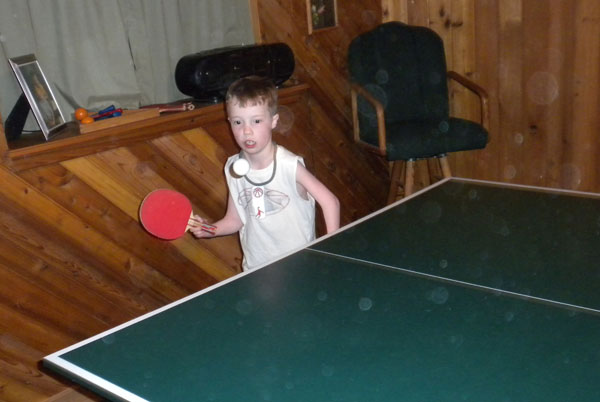 Luke has been working hard on developing his telekinesis technique.  He’s actually figured out a way to have the ball hover exactly where he wants so he can smack it to the other side of the table.  Sadly, it still hasn’t helped him win a lot of games. 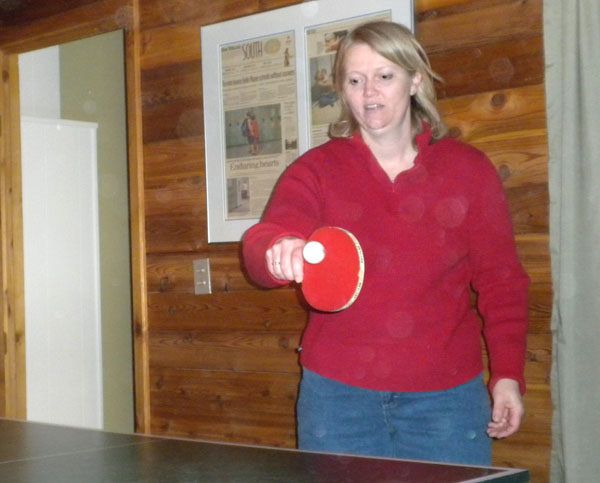 Not to be outdone by her son, Miss Sheri has created a method of “catching” the ping pong ball by having it stick directly to the side of her paddle.   The boys call her a cheater when she does this, but she just tells them to “suck it up!” 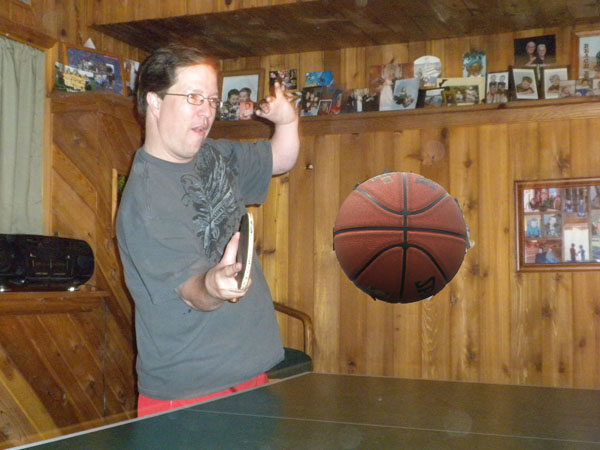 I tend to throw the boys more “unconventional” shots when I play with them.  For some reason, they belly-ache about this as well.    We just really need to work on making them tougher. 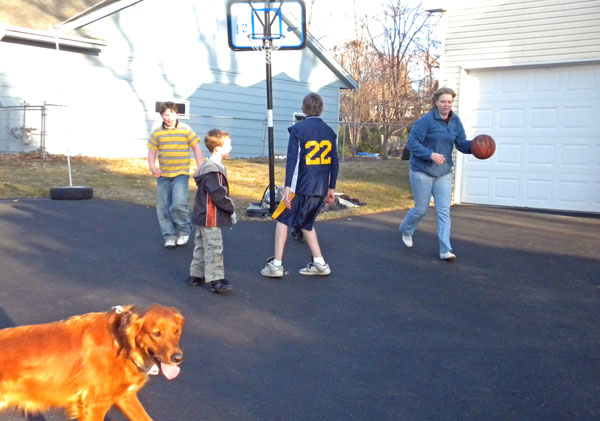 When we get bored with Ping Pong, we go outside and shoot some baskets with the neighbor boys.  Of course, Miss Sheri doesn’t ever actually let them have the ball when she plays, but we’re pretty certain they enjoy watching her dribble and shoot. 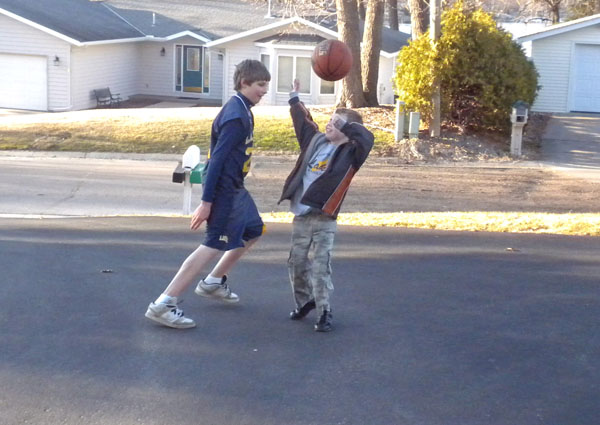 We’ve tried to explain to Luke that you don’t bounce the ball off your head like you do in soccer, but the kid just won’t listen. 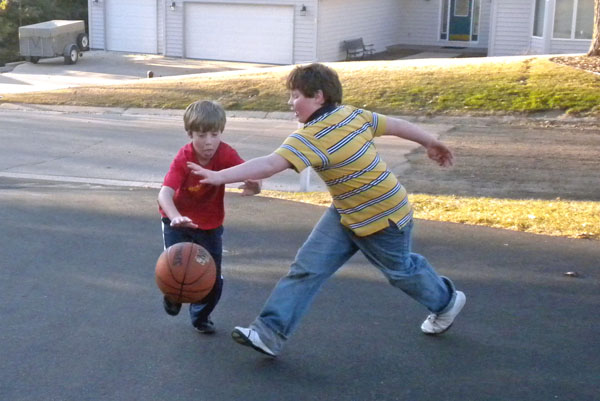 Avery has been watching old videos of Michael Jordan and now sticks his tongue out on virtually every play.  It hasn’t really helped him improve his game, but he does get to taste the sweat of his opponents a lot more than he used to. 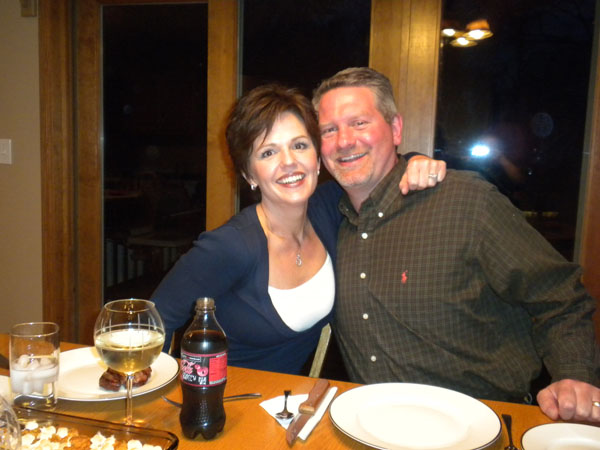 On Saturday night, we had dinner with our good friends, Tim and Katie Ashland.  I told Tim he couldn’t have any food until he let me take this picture.  Then after I took the shot, I told him I was just kidding and that we didn’t have any food anyways.  Then I laughed and laughed.

Love your website. One of the highlights of my Sundays. Keep it up.

One of the regular visitors to Shortarmguy.com sent me this modification of one of last week’s photos.  Not sure if it’s meant to be a compliment, but I took it as one! 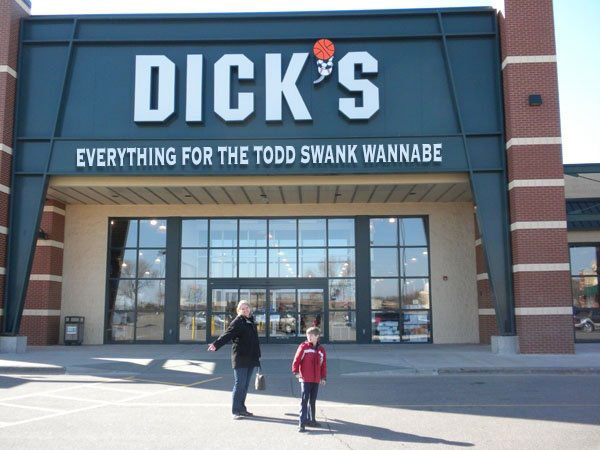 The Dangers of Weight Lifting 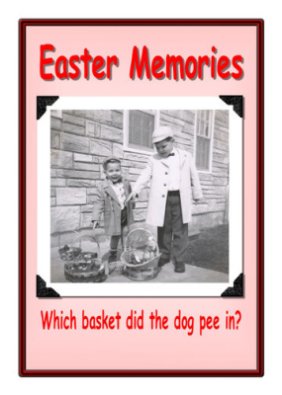 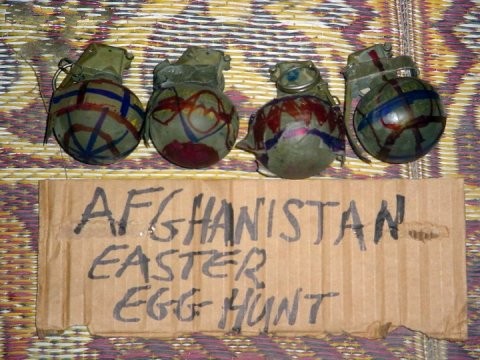 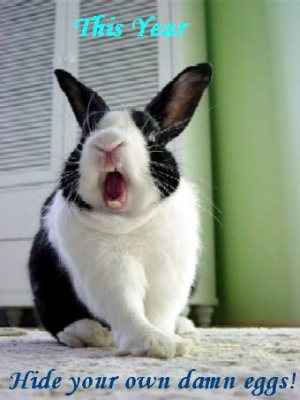 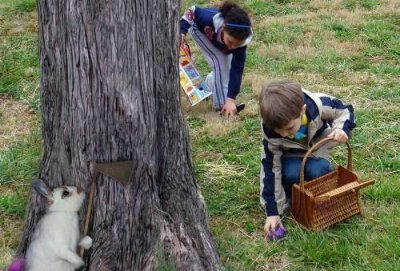 First came the commemorative coins,
then the T-shirts, then the plates,
& now something for the rest of us ….. 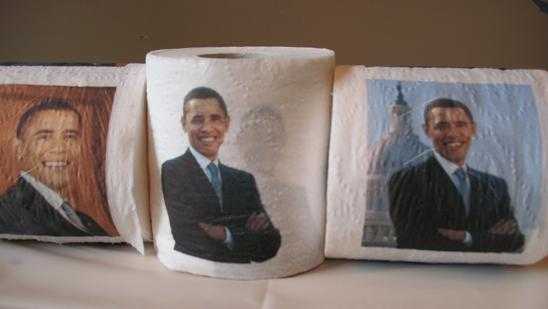 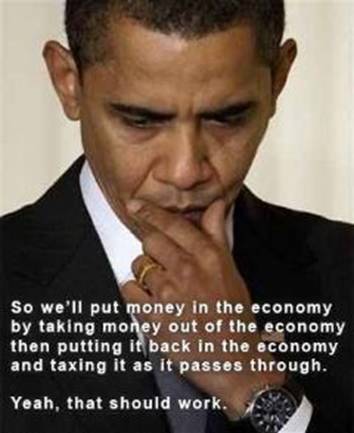 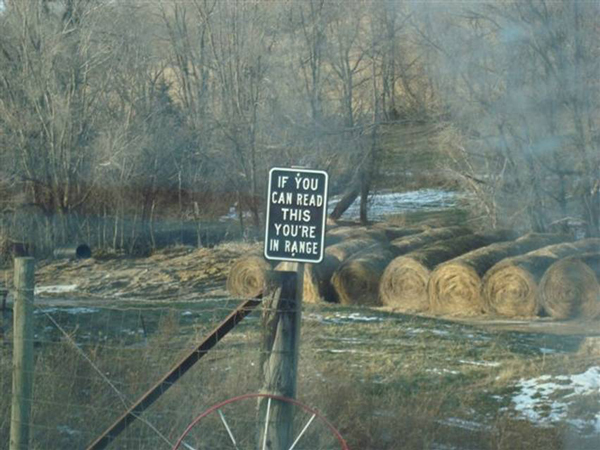 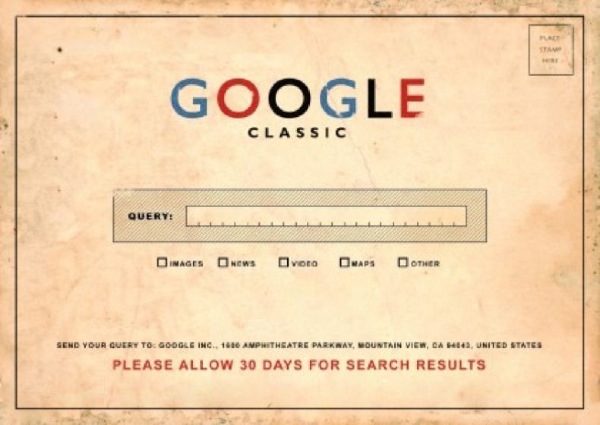 Thanks to all my readers that sent me this book!  It’s quite helpful. 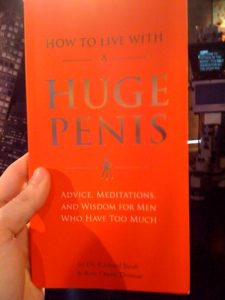 “I am only one; but I am still one. I cannot do everything, but still I can do something. I will not refuse to do the something I can do.”

Even people who have nothing to do with the Obama administration aren’t paying their taxes.

Hotwheels and Matchbox stocks are trading higher than GM.

McDonalds is selling the 1/4 – ouncer.

People in Beverly Hills fired their nannies and learned their children’s names.

A truck of Americans got caught sneaking into Mexico

The most highly-paid job is now jury duty.

People in Africa are donating money to Americans.

Mothers in Ethiopia are telling their kids, “finish your plate, do you

know how many kids are starving in the US ?”

The Mafia is laying off judges.

An elderly man in Queensland had owned a large property for several years.

He had a dam in one of the lower paddocks where he had planted mango and avocado trees.

In the shade of the fruit trees.

One evening the old farmer decided to go down to the dam to look it over, as he hadn’t been there for a while.

He grabbed a ten litre bucket to bring back some fruit.  As he neared the dam, he heard voices shouting and laughing with glee.

As he came closer he saw it was a bunch of young women skinny-dipping in his dam.

He made the women aware of his presence and they all went to the deep end.

One of the women shouted to him, ‘We’re not coming out until you leave!’

The old man frowned, ‘I didn’t come down here to watch you ladies swim naked or make you get out of the dam naked.’

Holding the bucket up he said, ‘I’m here to feed the crocodile.’

Moral: Old men may walk slow, but they can still think fast.

“For the first time, Microsoft faces a credible threat on the desktop, which they haven’t seen since, what, the Eighties?” said Todd Swank, vice president of marketing for Nor-Tech, a Burnsville, Minn.-based system builder. “Sure, Mac has 9% share and there’s Linux, but Linux has no organized group behind it. Android is Linux backed by Google.”

The government  wants us to cut the amount of gas we use…..

The best way to stop using so much gas is to deport 11 million illegal immigrants!

That would be 13 million less people using our gas.

The price of gas would come down…..

Then bring our troops home from Iraq to guard the Border….

When they catch an illegal immigrant crossing the border, hand him a canteen, rifle and some ammo and ship him to Iraq …

Tell him if he wants to come to America then he must serve a tour in the military….

Give him a soldier’s pay while he’s there and tax him on it…..

After his tour, he will be allowed to become a citizen since he defended this country…..

He will also be registered to be taxed and be a legal patriot….. .

This option will probably deter illegal immigration and provide a solution for the troops in Iraq and the aliens trying to make a better life for themselves.. ….

If they refuse to serve, ship them to Iraq anyway, without the canteen, rifle or ammo…..

Thought you would find this interesting.

2003, police in Warwickshire, England, opened a garden shed and found a whimpering, cowering dog. It had been locked in the shed and abandoned. It was dirty and malnourished, and had clearly been abused.

In an act of kindness, the police took the dog, which was a greyhound female, to the nearby Nuneaton and Warwickshire Wildlife Sanctuary, run by a man named Geoff Grewcock and known as a willing haven for animals abandoned, orphaned or otherwise in need.

Geoff Grewcock and the other sanctuary staff went to work with two aims: to restore the dog to full health, and to win her trust. It took several weeks, but eventually both goals were achieved.  They named her Jasmine, and they started to think about finding her an adoptive home.

The dog had other ideas. No-one remembers now how it began, but Jasmine started welcoming all animal arrivals at the sanctuary. It wouldn’t matter if it was a puppy, a fox cub, a rabbit or, probably, a rhinoceros, Jasmine would peer into the box or cage and, where possible, deliver a welcoming lick.

Geoff Grewcock relates one of the early incidents. “We had two puppies that had been abandoned by a nearby railway line. One was a Lakeland Terrier cross and another was a Jack Russell Doberman cross. They were tiny when they arrived at the centre and Jasmine approached them and grabbed one by the scruff of the neck in her mouth and put him on the settee. Then she fetched the other one and sat down with them, cuddling them.”

“But she is like that with all of our animals, even the rabbits. She takes all the stress out of them and it helps them to not only feel close to her but to settle into their new surroundings. “She has done the same with the fox and badger cubs, she licks the rabbits and guinea pigs and even lets the birds perch on the bridge of her nose.”

Jasmine, the timid, abused, deserted waif, became the animal sanctuary’s resident surrogate mother, a role for which she might have been born. The list of orphaned and abandoned youngsters she has cared for comprises five fox cubs, four badger cubs, 15 chicks, eight guinea pigs, two stray puppies and 15 rabbits.

And one roe deer fawn. Tiny Bramble, 11 weeks old, was found semi-conscious in a field. Upon arrival at the sanctuary, Jasmine cuddled up to her to keep her warm, and then went into the full foster mum role. Jasmine the greyhound showers Bramble the roe deer with affection and makes sure nothing is matted in her fur.

“They are inseparable,” says Geoff Grewcock. “Bramble walks between her legs and they keep kissing each other. They walk together round the sanctuary. It’s a real treat to see them.”

Jasmine will continue to care for Bramble until she is old enough to be returned to woodland life. When that happens, Jasmine will not be lonely. She will be too busy showering love and affection on the next orphan or victim of abuse. 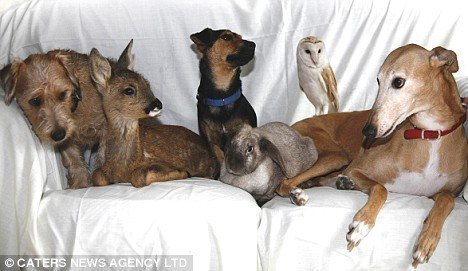 Doing what she does best, being a mother.