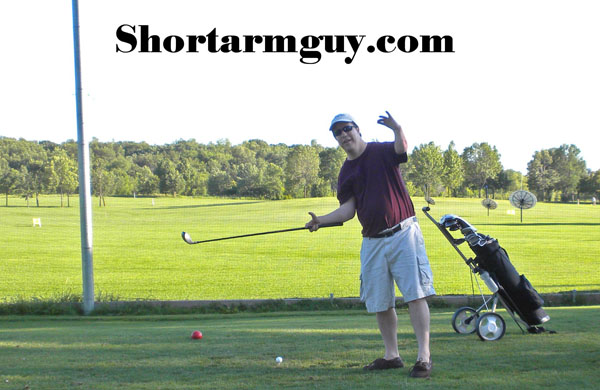 We had a very festive week leading up to the 4th of July having the opportunity to spend a lot of fun time with friends and family. Here we’re just done watching some fireworks at Dan Patch Days in Savage with our good friends, The Schoen Family. Had I known my hair looked like this, I probably wouldn’t have been nearly as happy as I seemed to be at the time. 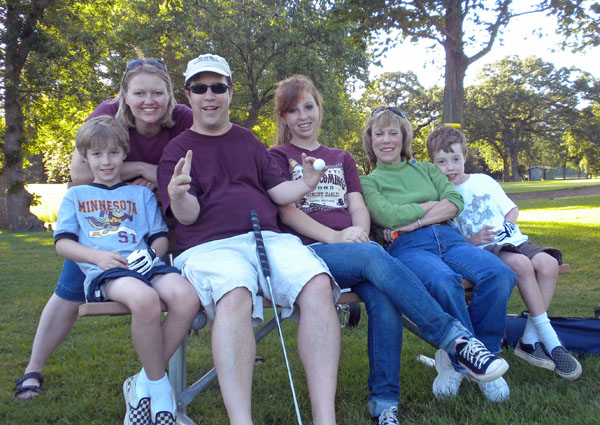 On Thursday night, we went golfing with Grandma Linda and Cousin Mallory. Grandma taught us a lot of really unique techniques for mastering the game. Most of them involve cursing of some sort, but they do seem to work. 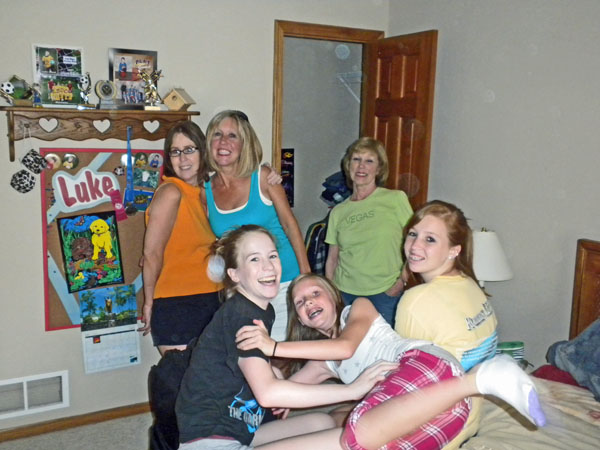 Both of my sisters brought their families to town to celebrate the 4th of July and enjoy a family vacation with us. Having nine extra people living in my house has been great practice for some new stress management techniques I’ve been trying to master! 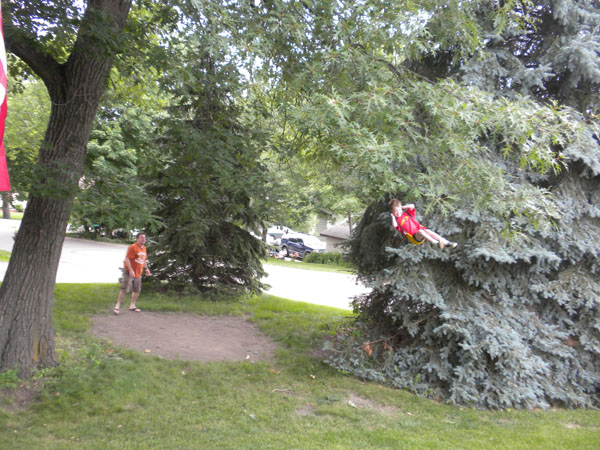 Luke told me that Uncle Dave was pushing him really high on the swing in the front yard, but I had no idea it would go this high until I went out for this picture. Then I went back inside and prayed for his safety. 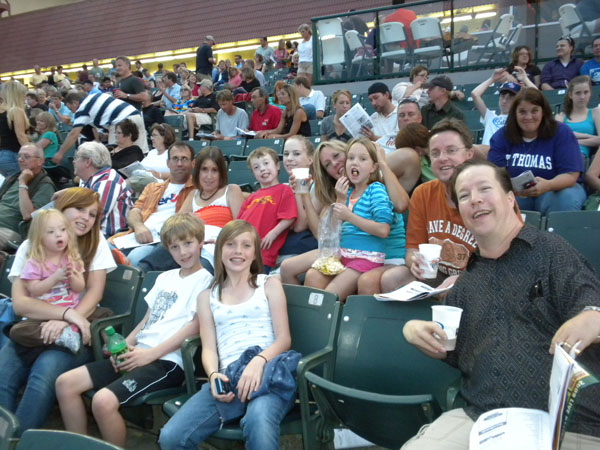 On Friday night, we went to Canterbury Downs to watch the horse races and see an incredible fireworks celebration. Drinking beers, gambling on horses, and singing songs loudly with my family made me Proud to be an American! 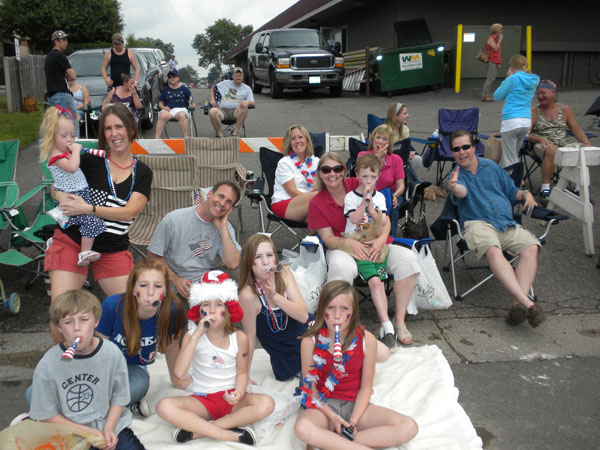 On Saturday, we went to the Apple Valley 4th of July parade and spent two hours watching floats, marching bands, and policemen on horses yelling at us to back off the street. I guess they’re worried about the Shriners running into us as they go crazy while they fly up and down the street on their little motorized vehicles. Seems to me that the policemen would be better served by yelling at the Shriners instead, but that’s just one man’s opinion.

I have fun meeting people like former US Senator and current candidate for Minnesota Governor, Mark Dayton. I always yell out my support for all the politicians even if I have no plans on voting for them. It just seems to make them happy! 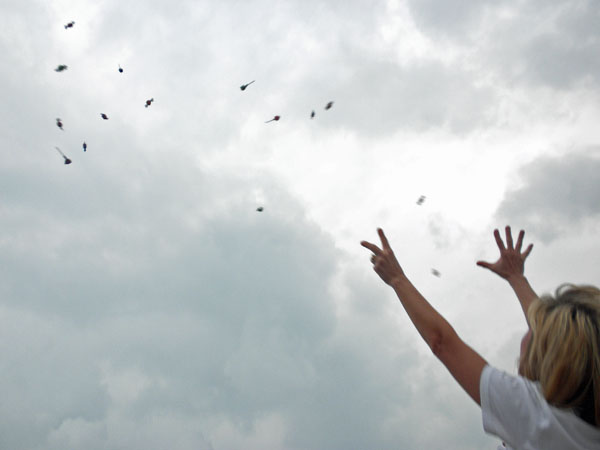 Of course, no parade would be complete without having mass amounts of candy tossed at us. Aunt Tracy loved rallying the kids to go for it whenever a tootsie roll or sucker ended up in the street near by us. Eventually it seemed that even God was getting in the act as the candy just seemed to rain down us from the heavens! 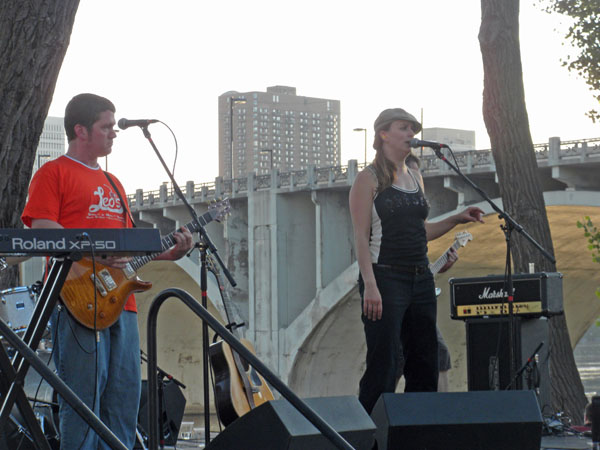 On Saturday night we went to downtown Minneapolis to see the incredible fireworks display we heard they had. We thought we were pretty smart when we staked out a good place to watch a few hours before they started. Unfortunately, we didn’t realize that the streets would fill in with a huge amount of drunk people who had no issues with standing in front of the kids to see them light the sky. They did sound pretty good, though!

From my friend, Cathy, who apparently is tired of hearing about my medical drama.
Sheesh with the drama! Whaddya anglin’ for – sympathy, or what!? Knock it off already!

Monday, went to work. Got home safe with my lungs and eyes intact. Fed the dogs, played with the dogs. Went to bed.

Tuesday, went to work. Got home safe. Lungs and eyes were still intact. Fed the dogs, played with the dogs. Watched the Twins game. Went to bed.

Wednesday went to work. Then went to Jenny Craig. Lost another 1.6 lbs and 4 more inches. Got home safe. Scary moment there for half a second as lightening moved in. Then it moved out. Fed the dogs. Watched the Twins game. Went to bed.

Thursday went to work. Got nothing done as I mourned the loss of Farrah Fawcett. Feathered my hair in her honor. Got home and was pissed to see that Michael Jackson bumped her from all news coverage. Fed the dogs. Went to bed.

Friday morning got up, and 30 seconds later, threw my radio out the window. By that time, I had Michael Jackson coverage coming out of my ears. Since I still wanted my eyesight intact, I had no choice but to dispose of the offending electronic. Went to work. Got home safe. Fed the dogs. Watched the Twins game. Had a Kahula and cream. Got out my Charlie’s Angels Season 1 on DVD. Watched a couple episodes. Retrieved my radio. Went to bed.

Saturday I got up and went grocery shopping and to the vet to pick up Jackson’s prescription. Came home. Watched the Twins game. Then I watched the Cubs game. Both lost. Phooey. Watched Defiance. Good movie! Went to bed.

Sunday I got up and successfully went shopping. Now I have shorts that fit and won’t cause a scene when they’re down around my ankles. Watched the Twins game and the Cubs game at the same time. Both lost. Phooey. Cut the grass in the front and backyards. Logged on to make sure Shortarmguy was still alive. At last report, he still was.

CRIPPLED IS A STATE OF MIND.
UNLESS YOUR EYES HAVE BRONCHITIS. THEN IT’S ALL IN YOUR HEAD.

Fun with a Monster Truck

Does this happen to you in the morning?

Dangers of Gliders and Parachutes 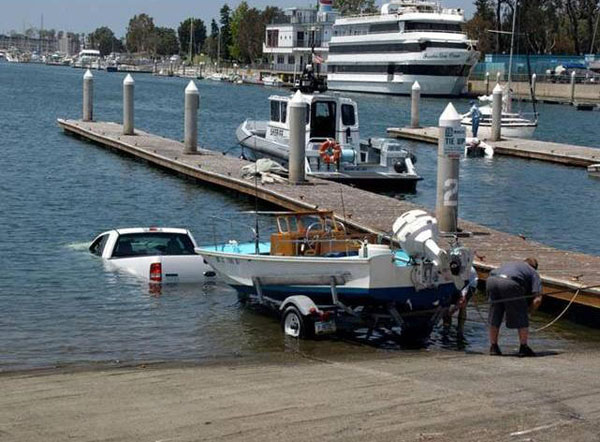 Someone Failed to Grasp The Concept of the Boat Launch 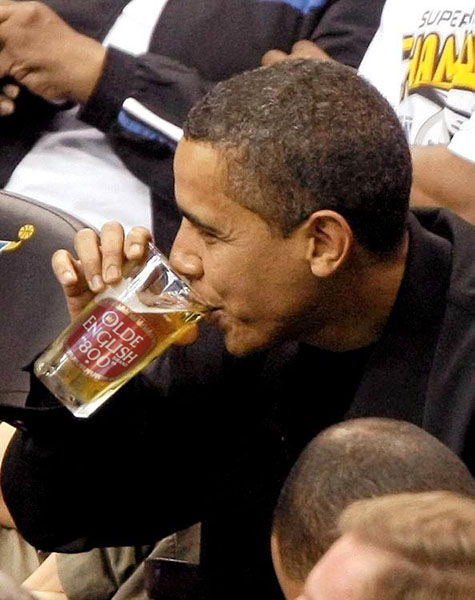 How to relax after a tough day at the White House! 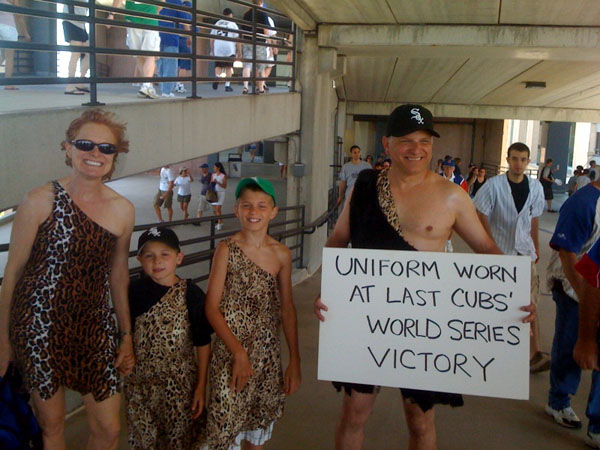 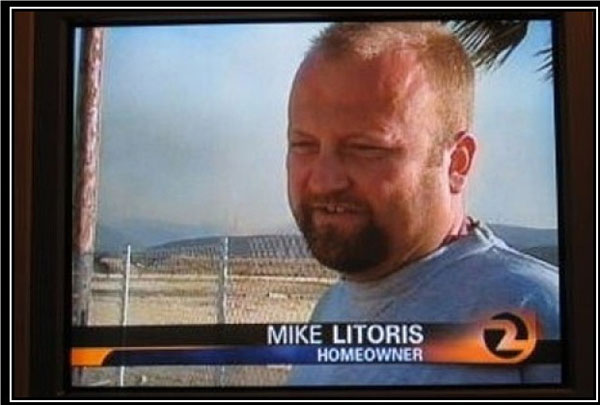 Guessing that’s not his real name… 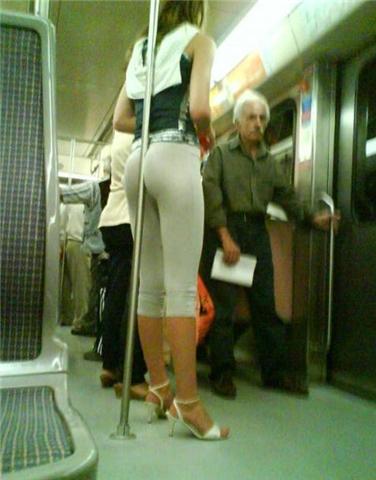 How to hold on to the train to prevent from falling…

“The best way to have a good idea is to have lots of ideas.”

Little Susie goes home from school and tells her mum that the boys keep asking her to do cartwheels because she’s very good at them ?

Mum said: “YOU should say NO-they only want to look at your undies”.

Susie said: “I know they do, that’s why I hide them in my backpack”!!

Todd Swank Talks About The Channel

Nor-Tech in Burnsville, Minnesota cares about their employees. That’s why they have an in-house day care center How cool is it for your child to know that if he fell and hurt himself, his dad or mom is only a few steps away from making his pain go away.

They also care about their customers.
“Our business has always been customization,” explains Todd Swank, VP of Marketing at Nor-Tech. ” Our customers want to have the ability to select which CPU they want, which hard drive they want, whether they want dual monitors or quad monitors. They’re going to come to us and say, can you build this and we are going to say yes.” Click here to watch video. 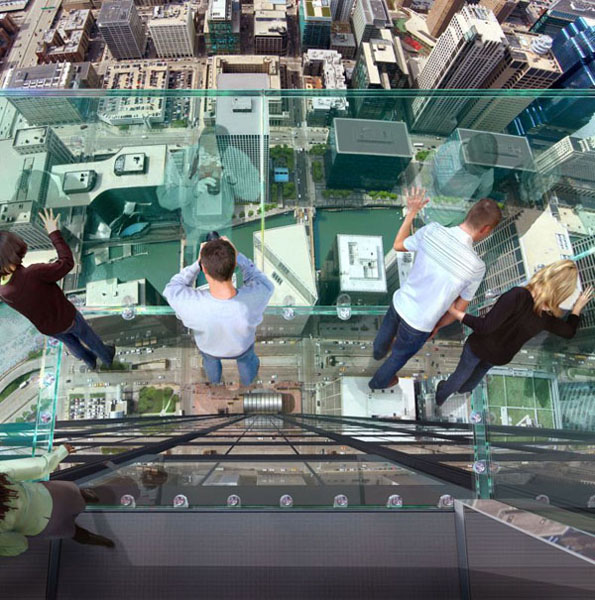 New Sears Tower Glass Balcony — I gotta do this some day!

Why we love children!

1) NUDITY
I was driving with my three young children one warm summer evening when a woman in the convertible ahead of us stood up and waved. She was stark naked! As I was reeling from the shock, I heard my 5-year-old shout from the back seat, ‘Mom, that lady isn’t wearing a seat belt!’

2) OPINIONS
On the first day of school, a first-grader handed his teacher a note from his mother. The note read, ‘The opinions expressed by this child are not necessarily those of his parents.’

3) KETCHUP
A woman was trying hard to get the ketchup out of the jar. During her struggle the phone rang so she asked her 4-year-old daughter to answer the phone. ‘Mommy can’t come to the phone to talk to you right now. She’s hitting 20 the bottle.’

4) MORE NUDITY
A little boy got lost at the YMCA and found himself in the women’s locker room. When he was spotted, the room burst into shrieks, with ladies grabbing towels and running for cover. The little boy watched in amazement and then asked, ‘What’s the matter, haven’t you ever seen a little boy before?’

5) POLICE # 1
While taking a routine vandalism report at an elementary school, I was interrupted by a little girl about 6 years old. Looking up and down at my uniform, she asked, ‘Are you a cop? Yes,’ I answered and continued writing the report. My mother said if I ever needed help I should ask the police. Is that right?’ ‘Yes, that’s right,’ I told her. ‘Well, then,’ she said as she extended her foot toward me, ‘would you please tie my shoe?’

6) POLICE #2
It was the end of the day when I parked my police van in front of the station. As I gathered my equipment, my K-9 partner, Jake, was barking, and I saw a little boy staring in at me. ‘Is that a dog you got back there?’ he asked.
‘It sure is,’ I replied..
Puzzled, the boy looked at me and then towards the back of the van. Finally he said, ‘What’d he do?’

7) ELDERLY
While working for an organization that delivers lunches to elderly shut-ins, I used to take my 4-year-old daughter on my afternoon rounds. She was unfailingly intrigued by the various appliances of old age, particularly the canes, walkers & wheelchairs. One day I found her staring at a pair of false teeth soaking in a glass. As I braced myself for the inevitable barrage of questions, she merely turned and whispered, ‘The tooth fairy will never believe this!’

8) DRESS-UP
A little girl was watching her parents dress for a party. When she saw her dad donning his tuxedo, she warned, ‘Daddy, you shouldn’t wear that suit.’
‘And why not, darling?’
‘You know that it always gives you a headache the next morning.’

9) DEATH
While walking along the sidewalk in front of his church, our minister heard the intoning of a prayer that nearly made his collar wilt. Apparently, hi s 5-year-old son and his playmates had found a dead robin. Feeling that proper burial should be performed, they had secured a small box and cotton batting, then dug a hole and made ready for the disposal of the deceased.
The minister’s son was chosen to say the appropriate prayers and with sonorous dignity intoned his version of what he thought his father always said: ‘Glory be unto the Faaather, and unto the Sonnn, and into the hole he goooes.’ (I want this line used at my funeral!)

10) SCHOOL
A little girl had just finished her first week of school. ‘I’m just wasting my time,’ she said to her mother. ‘I can’t read, I can’t write, and they won’t let me talk!’

11) BIBLE
A little boy opened the big family Bible. He was fascinated as he fingered through the old pages. Suddenly, something fell out of the Bible. He picked up the object and looked at it. What he saw was an old leaf that had been 20 pressed in between the pages.
‘Mama, look what I found,’ the boy called out.
‘What have you got there, dear?’
With astonishment in the young boy’s voice, he answered, ‘I think it’s Adam’s underwear!’